Walking in the park

Park near my home. There’s a path that follows the edge of the park. Path is almost 2 sidewalks wide with a demarcation in the middle. i walk clockwise and follow drivers rules: walk on the right hand lane & stick to my lane.

“Locals” walk counter clockwise. A few, especially this one runner, keeps running in “my” lane playing chicken with me. Getting very close with no mask.

My feeling is that they resent me “telling” them where to walk? He’s apparently willing to brush up against me or shoulder check to force the inside lane.

Anyone else experienced this? btw, my dog is on my right, i prefer to be between her and other people, especially kids when we walk.

It’s not the only time ive encountered people pushing the inside lane walking. i don’t get it. isn’t it natural to walk on the right and have folks pass on the left.

oh. edit. the park is almost totally empty this time of night when i walk her. Just me and the runner sometimes.

Seems like these two threads should be linked up…

Maybe he had an off day.

In all seriousness, I stopped asking questions like this a long time ago. You’ll drive yourself mad.

Counter clockwise is the norm. Not sure why. I ride on a criterion circuit near my house and have to tell people to change direction.

If you’re bringing an animal to shit in a public place where people exercise and kids play, you have to expect some hostility.

“Locals” walk counter clockwise. A few, especially this one runner, keeps running in “my” lane playing chicken with me. Getting very close with no mask.

In 1896, the First Modern Olympic Games was held in Athens, Greece. During this event the athletes were required to run clockwise during the track events. This was met with much complaint from the athletes. It was because of these complaints that the IOC then gathered in 1913 and set the current anticlockwise rule.
We run counterclockwise because everything in nature tends towards counterclockwise motion. That spectator will perceive the runners as moving left to right-the same direction our eyes move when we read. The human body is slightly heavier than the right because of the heart and when running anticlockwise, the body would tend to very slightly incline towards the left, which could be an advantage while running anticlockwise most people are right hand/leg dominant. Moving counterclockwise we have a better control and move faster. Position of the center of foot pressure during balance tests was correlated with the turning score.

Also a video with more info 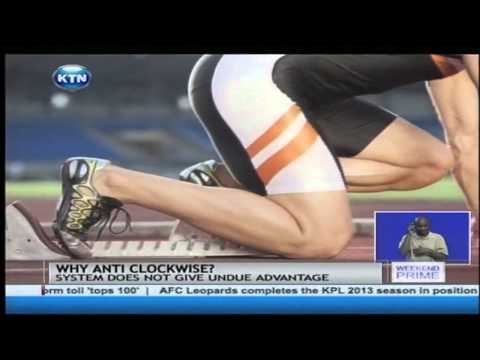 the point is, there’s more than enough room for 4 people to walk abreast…and the park is empty. In every other park, people walk on the right hand side.

They can run counter-clockwise, on the right side…

I don’t need some running oaf bumping my elderly dog. Vet bills i want to avoid.

An interesting exception is the outer circuits of Daan forest park. I guess it’s too big of a circuit to impose an anti clockwise rule on.

Yeah nah you run and cycle on the left for counterclockwise circuits. You hug the curve. The racing line in track cycling terms is on the left. That’s why I have to tell people to turn around because it causes collisions otherwise.

it’s a park, nor a running tack. Other walkers do the same as me.

That’s very interesting. I’d always assumed it was because most people are right handed. I’ve learned something.

Purely based on personal observation, but when people get off, say, an escalator they tend to turn right.

If people walk on the wrong way of the road or path what I found works is pretending not to pay attention and looking at my phone or down or being seemingly distracted and then be prepared to walk straight into them, and they will move.

In all seriousness, I stopped asking questions like this a long time ago.

This. There are a lot of weirdos out there, when it comes to exercising, including those who do like weird qigong moves on public transport. Just don’t expect others to do what you feel is the right thing to do.

The wife and I used to go jogging at a university running track. Everyone walked counter clockwise and, in general, outer lanes were used by joggers while walkers used inner lanes. However, there were about 3 different people who would do the exact opposite. Clockwise walking in outer lanes and jogging in inner lanes. So each time they were there you would always be confronting them on each lap you made. From the looks on their faces they seemed to enjoy causing trouble…especially one guy. with weird look on his face.

Ha! Come to Banqiao. See people cycling or riding scooters on the wrong side of the road, driving their cars in the middle of the road. Your runner will seem like nothing after that.

I was walking in the local riverside park and knew a jogger approaching from a long way behind would get so close to me on the bend in the path that he would brush my clothing. Before he even got close I stuck my arms out at the sides and started making circles of random sizes. He gave me the wide berth I wanted.

The same trick also worked this morning when I stopped my scooter at a red light rush hour traffic and realised that if I did nothing people would keep ignoring the queue the first few of us had made and get too close.

If I get fed up with people walking straight at me when I’ve noticed that they’ve already noticed me, I sometimes just stop dead. Far less bothersome than giving a polite inch only for them to not give an inch too, but instead take the suddenly available inch. And seemingly act surprised when I don’t disappear in a puff of smoke and they bump into me.

My only true remedy for my sanity is to find places far from anyone. Fortunately the geography of Taiwan affords plenty of areas that most people avoid.

the park is almost totally empty this time of night when i walk her. Just me and the runner sometimes.

the point is, there’s more than enough room for 4 people to walk abreast

So… Why should he move instead of you? Seems like you’re playing chicken and brushing them as much as they are.

So, i don’t want him trying to push on my right.

Could you take a picture of the pathway next time and post it (without revealing your location of course)? Always good to have some visual reference.

Ha! Come to Banqiao. See people cycling or riding scooters on the wrong side of the road

Tainan is similar. Scooters driving on the wrong side expecting you to give way. Most of the parks are shortcuts for scooters. Or a convenient way to drive to your favorite bench to have a cigarette.