The GOP pattern here seems clear. Throw a tantrum if the Dems have some successes. No matter how important the bill for the US.

McConnell had previously warned Democrats that GOP lawmakers wouldn’t back the semiconductor bill if they continued to work on a reconciliation package. Talks between Schumer and Manchin on such a package had appeared to sputter weeks earlier — but just hours after the Senate voted to pass the Chips and Science act, the Democrats revealed that they had struck a deal.

Republicans reacted angrily, and the House minority whip’s office instructed GOP members in a late-night memo to oppose the chips bill when it came to a vote Thursday. “They lied about reconciliation,” House Minority Leader Kevin McCarthy, R-Calif., said on the morning of the vote.

The Chips and Science Act includes more than $52 billion in funding for U.S. companies producing computer chips, among other provisions.

The GOP pattern here seems clear. Throw a tantrum if the Dems have some successes. No matter how important the bill for the US.

So the same pattern in this case for the House representatives that withdrew their support on the eve of the vote. Their support or lack of support has nothing do with the bill itself. It’s about how can we leverage this to get what we want somewhere else.

Trying to pretend they have some altruistic motive to curb spending, or whatever excuse they provide, is laughable. Support should change because the bill changed. Any other reason is political gamesmanship.

The latest from the annual GOP get-together otherwise known as CPAC.
Headline speaker - Viktor Orban. He fits right in.

He has extolled the value of racial purity, is vehemently anti-immigration, has cultivated close ties with Russia’s Vladimir Putin and was a speaker at this week’s Conservative Political Action Conference, known as CPAC, in Dallas.

Hungarian Prime Minister Viktor Orbán, 59, is widely criticized around the world for systematically dismantling his country’s nascent democracy during his 12 years in power — but that hasn’t stopped him from emerging as a darling of many on the right in America.

Orbán told a cheering crowd of conference delegates that he and other conservatives were in a battle to protect Western civilization against the forces of liberalism and mass migration.

“If you separate Western civilization from its Judaeo-Christian heritage, the worst things in history happen," he said.

"Let’s be honest, the most evil things in modern history were carried out by people who hated Christianity. Don’t be afraid to call your enemies by their name. You can’t play safe but they will never show mercy.”

“Politics are not enough. This war is a culture war," he added.

Critics say he runs an 'open dictatorship.' Why is Viktor Orbán a star at CPAC?

“The reason that Orbán keeps winning is he has the control of a dictator,” said one political scientist. “So the question is, what are the Republicans in it for?"

CPAC even had victim cosplay. 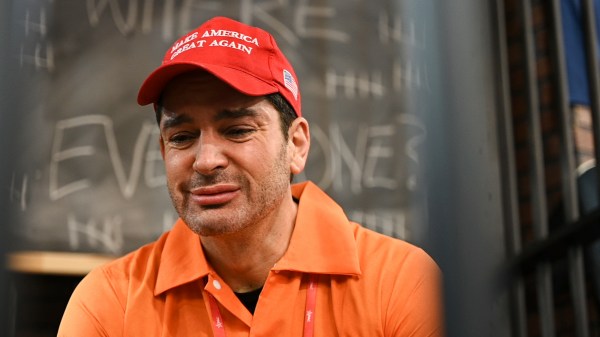 The right-wing performance art at CPAC turned out to be even weirder than MTG's claims about Jewish space lasers.