What has the DPP achieved so far?

I have to admit I am not up to date on local politics. I remember there was some bruhaha about labor reforms and a prompt rollback. They did also something to try and achieve what they call “transitional justice”.

What has the DPP achieved so far?

The only transitional justice that has been put into works is the Aboriginal Transitional Justice act. The passing of that act is also now moving other Aboriginal related bills, such as solidifying National language status for Aboriginal languages, and Autonomy act is an on-going discussion in legislature.

The Supreme court also acted to make way for marriage equality, and declared same sex marriage automatically legal if no law is put into place within two years. As for now the legislature hasn’t passed anything to expedite matters.

Funding for TV shows and movies with a Taiwan focus have also increased, giving us shows like the Teenage Psychic and A Boy Named Flora A.

Although rolling back the One fixed day off and one flexible rest day policy is unfortunate, it ultimately came down to the fact that they couldn’t raise the minimum wage to accompany that policy, resulting in low wage laborers being hurt the most. The revised law though not ideal, does increase overtime pay for low-wage laborers.

At the local level, each DPP municipals actually see drastic improvements. Take my city Hsinchu for example, the roads are finally without pot holes. In the past, KMT dominated Hsinchu City seemed to constantly be working on roads, however, they are filled with pot holes within weeks. Since the new DPP mayor, you can’t find a pot hole even if you go look for it. It comes down to actually using tax payers’ money correctly.

The changes to Jilong is also clearly visible. Mayor Lin Yo-chang outperforms past corrupt KMT mayors by a mile.

A post was split to a new topic: OT from DPP

They’ve managed to anger the other China 2 the point of fueling them to expand their all out front attack on Taiwan.

Moves by Beijing to give Taiwanese students and graduates equal status with mainland Chinese, granting them greater access to mainland universities, p...

The Tsai administration hasn’t achieved much so far, but what they haven’t done is probably more important. They haven’t kissed up to the dictator-for-life across the Strait, they haven’t given up more of Taiwan’s sovereignty for nothing in return, and they haven’t flooded the island’s most beautiful spots with hordes of Chinese vandals slash tourists.

Yeah they drew a line in the sand with the creep of mainland influence that was rapidly occurring when KMT were in power.
Or rather it was the sunflower kids who drew the line and they followed.

The DPP govt has put a big fund together to offer much better salaries to Taiwanese profs , at least for the more elite section anyway.
They do need to do this to combat mainland and also Singapore, HK and other countries poaching the best academics.

KMT lashes out against DPP over pension reforms - Taipei Times

Chinese Nationalist Party (KMT) politicians yesterday lashed out at the Democratic Progressive Party (DPP), criticizing it as being willful and arrogant when drafting the proposed pension reform bill, after retired colonel Miao Te-sheng (繆德生) was...

They aren’t the KMT. They’ve pushed through the stolen assets bill. They’ve amended the fire prevention act t make it more difficult for people to burn down their apartments. They have sort of raised the profile in Taiwan by getting China angry with everything they do. They’ve encouraged China to point more missiles at Taipei. Apparently they’re working on the new education reform bill. Other than that I haven’t really been paying attention. 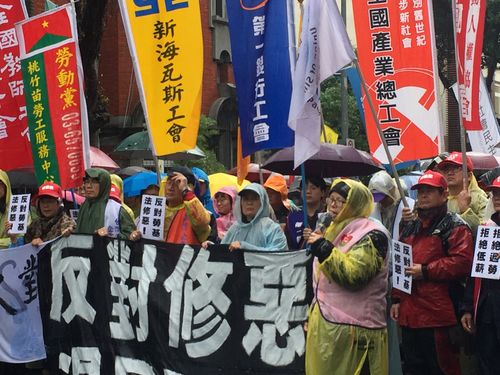 Taipei, Jan. 8 (CNA) Taiwanese labor groups staged a rally outside the Legislative Yuan Monday in an attempt to thwart the passage of an amendment to the Labor Standards Act that they described as "the worst in history."

Its not the DPPs fault that China threatens Taiwan all the time.
People should remember that.
Also they were voted in on a platform to not be close to China . Also this administration has Not made any big changes to symbolism and a lot of noise about indeoendence. What is actually happening is China is getting more powerful and is pushing forward with their agenda steadily.

Its not the DPPs fault that China threatens Taiwan all the time.
People should remember that.

True. China has in the past done a good job of portraying Taiwan as the trouble makers and China’s ramping up tensions as a response, but bottom line, China is the aggressor here.

Also they were voted in on a platform to not be close to China .

Also this administration has Not made any big changes to symbolism and a lot of noise about indeoendence.

Partially true, I think Tsai has done as well as could be expected not to give Beijing ammunition with which to use. But it’s disingenuous to claim to be keeping the status quo when that changed under the Ma administration, with voter support and just roll back to the pre Ma days and pretend it never happened.

I’m not saying it was wrong, because that was clearly what was sold to the public and they voted for a DPP majority in spades. She is also dealing with popularity issues which have a tendency to cater to the populist groups in the DPP.

What is actually happening is China is getting more powerful and is pushing forward with their agenda steadily.

Pushing forward steadily is the art of Chinese chess.

New Southbound Policy has been working in various ways.
Distinct and significant increases in inbound tourists from the targeted countries. Increase in university students from some of those countries.
Vietnamese brides are still the #1 foreign brides, iirc, and as such MoE is targeting some of their children to learn Vietnamese in Taiwan public schools. This will help forge ties with Vietnam, which is now undergoing what China underwent about 20 years ago (economy opening up, foreign investment, etc.). This should pay dividends in a generation or so.
Hopefully, Taiwan can further develop its medical tourism industry. The policy and law are built in right now, but the government has yet to truly push it like it has for other industries.

The only transitional justice that has been put into works is the Aboriginal Transitional Justice act.

The assets committee was created by the DPP, which of course required a new law. I followed the news about it for a while, but it wasn’t that exciting – lots of appeals. How much have they actually seized so far?

The Supreme court Council of Grand Justices also acted to make way for marriage equality, and declared same sex marriage automatically legal if no law is put into place within two years. As for now the legislature hasn’t passed anything to expedite matters.

And iirc it was a DPP minister who testified on behalf of the government that same sex marriage would destroy civilization by offending people’s ancestors, or something.

Transitional justice is one of President Tsai’s major platform, and now we have a database thanks to the efforts. There’s a lot to be desired and plenty of room for improvement. For example, you can only download the split data as spreadsheet files, instead of it being displayed in the browser. You can still try to pull out stats like this Death sentence ratio by place of origin during the White Terror Era [省籍死刑率] [image] Using this database researchers said Chiang Kai-shek personally m…