What is/was your favorite drink?

For me, the first on the list is my great granddads shine. I was raised in the mountains of North Idaho and he had a still that he operated with my grandpop. After the shine was taken down the hill and properly flavored, I was offerred a taste. It was only a taste but . . . . I have never forgotten. Damn! Those that maintain that whiskey is an acquired taste have not had pop’s whiskey.

The second best on the list was a bottle of Macallan 30. I got this as a gift from my boss after opening an office and warehouse on the Gold Coast. He gave it to me and I put it on the shelf in my office. Things got busy and I hadn’t thought about it much. One day my boss, knowing it is on the bookshelf, asks if he can see it. Well, of course he could. He sat down in my office and cracked the bottle. We sat there until the bottle was empty.
Damn good stuff. I wish I could buy some more. DAMN!

Number three on my list is simply cold water. I was in Mexico, looking at some properties that I wanted to buy. I had looked at it one a month before with the owner and thought I could find it again on my own. Bad Mistake. I rented a Toyota and headed out. Ultimately the road turned to loose sand. I kept going thinking that I would soon find a good place to turn around. I ended up stuck in the sand, totally unprepared for the desert. I walked in shorts, t-shirt and sandals for hours (with no water) until I finally got to a hacienda. I was so parched and tired, all I could do was beg for water. Pure bliss. But, still number 3.

Number 4 was my dads beer (that he had left outside in the cold air of Idaho.) Me and a bud were going to see our girlfriends and after leaving the back door, noticed pop’s 6 pack of beer on the porch where he had left it (away from mom and to keep cold until things with family quieted down) Well, we needed it worse than he did so . . . well, you know where this is going. All four of us enjoyed it, got tipsey and had some innocent fun. Got whipped big time over that. Not because of pop, hell he would have bought us some if he had known, but mom found out and all got in deep shit.

Number 5, and last on this list, is a simple bottle of whiskey of unknown brand. I was involved in negotiations with another firm. An arbitrator had been called in. We met in the arbitrator’s office. The outcome was VERY VERY large. At the beginnining of negotiations, the arbitrator pulled out a bottle, of unknown vintage). He proclaimed, “Gentlemen, one of two things will happen here today. First, and hopefully so, we will reach an agreement. The second, and less attractive alternative is that this bottle will be empty and you both will be here to argue your case at 9:00 am tomorrow. Do I have your attention?” Of course he did. Well, we started and finsished with about one drink each left in the bottle. Keep in mind that this was not just a fifth. It was a Texas fifth which is about 3 liters. We all took taxis home with our notes. Glad I had notes beciause I had not much of a clue what I had agreed to until the next day. As it turned out, I got what I wanted and he got what he wanted. As for the arbitrator, I guess he got what he wanted too.

Enigma, that’s a beautiful post. I just got in after 2 bottles of house white and I can barely remember my full name, let alone my favourite drink. I got home, though!

Buttercup;
There aint nothin’m good as gettin’ home safe. Good on ya!

Maoman;
Haven’t heard of this distillery, Laphroaig Distillery, but hell, bring it on. Looks good and we all need beak occasionally.

The beer fairies took care of me.

Lagavulin, 16-year old. Liquid gold.
Gulden Draak. Mmmmm… beer to put your feet up, read a book, and forget the world by.
Water, straight out of the tap at home. Some of the best in the world. Just got back a few hours ago (damn jet lag). What I wouldn’t give for such clean cool air and water every day… will give, soon enough. It’s ridiculous to leave such goodness behind.

Presently it’s Carlsberg, ever since they’ve started carrying it at the local 7-11 and Wellcome stores.

As far as beer goes, Carlsberg is pretty nice, but then I’m in no way a connoiseur of the amber fluid, I’ve no even a huge drinker of it. Years ago I was partial to JD with ice and soda, but I haven’t had that in many a year.

The drink I can’t live without is strong, freshly brewed black coffee. I need it in order to function, and can’t stand it when someone adds milk, sugar, or flavorings to it. Just black is fine.

And water. Nothing is more refreshing than water. I drink about 3L per day and love it. And a plain Margarita (in a long glass, not an iced slurpy, thanks. Slurpies are for kids!)

once on a summer job was about to head to caribbean for vacation, a haitian coworker told me to pick up a few bottles of barbancourt rum, best in the world, only available in the islands.

excellent and often appreciated advice, smooth as anything sipped straight as it is meant to be, with a lingering aftertaste of fresh sugarcane. to ordinary rum what your favorite whisky is to a bottle of rotgut from 7-11. available in states now too but sadly as far as i know not here.

"Rhum Barbancourt of Haiti is known the world over as “the rum of connoisseurs”. Made from the juice of sugar cane, the production of Rhum Barbancourt follows a centuries-old tradition that grew from the French methods of creating cognac and brandy.

Unparalleled in quality and taste, Rhum Barbancourt is distilled from hand-cut, locally grown sugar cane juice - never molasses; It is double distilled in pot stills; Aged in white oak barrels to yield a spirit that has been called “one of the finest rums in the world.”

Barbancourt uses a sugar cane growing in the fields of the Plaine du Cul-de-Sac. It is common belief that this cane is evocative of its genuine soil, the terroir. A unique wild yeast, originating from this area, probably exists, which proliferates on the cane stalks, thus producing these peculiar esters, taste and aroma of Barbancourt brands, during the fermentation process. ".

high-quality, strong black-coffee. Perhaps with a bit of honey.

This thread is making me thirsty!!! Barbancourt Rhum is the best one I ever had. An Haitian friend of mine was bringing back a bottle every year, the 5 stars grade (the one on the pic is 3 stars). Man, what a great treat!!!

I find myself drinking a lot less since living in Taiwan though. Might be the weather, the food (doesn’t fit well with wine imo), the fact the hubby doesn’t drink much… Anyways, all for the better, as this is a great place for non-alcoholic drinks.

The tea here is awesome!!! So many varieties (OK, all wulongs, same same but different) and such high quality teas!!!

I’ve never had a Bramble, but it looks tasty. :lick: 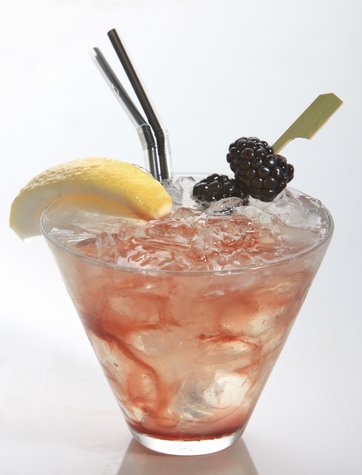 [quote]Years ago, I wrote that the bramble cocktail would be the next big thing to hit these shores (the U.S). I keep waiting to be right. The bramble is the riesling of the cocktail world, known by drinks weenies since seemingly forever (like, the ’80s), yet still unfamiliar to most overheated pilgrims sidling up to the bar in search of a puckery summer drink.

It’s a simple and immensely likable sip that’s been called England’s cosmopolitan . . . It’s on almost every British bartender’s short list, having been invented in 1984 . . .

The bramble is essentially a short gin sour with a drizzle of crème de mûre, a French blackberry liqueur, over the top. . .

In a cocktail shaker filled with ice, shake together the first three ingredients and strain into a rocks glass filled with crushed ice (see below), mounded high. Drizzle crème de mûre over the top and garnish with a slice of lemon, two blackberries and a short straw.

Note: Crushed ice is important in this drink for the dilution. At home, you can either smash your cubes in a clean dish towel or make cracked ice by whacking each cube with the back of a heavy spoon.

And, to make simple syrup, stir together equal measures of hot water and sugar, cool to room temperature and store in refrigerator until ready to use.[/quote]

Now, if only I could get some fresh blackberries. Back home they’d be growing wild everywhere.

Was just telling Housecat about this the other day. Slurp Slurp yummy!

• 1 kg. green, unripe mangoes
• 700 gm. (or to taste) sugar
• 20 gm. black salt or kala namak (available from Indian grocers). If you do not have this, use rock salt.
• 1 tsp. cumin seeds, dry-roasted on a griddle or tawa
• 1 tsp. ground black pepper
• A handful of fresh mint leaves. You can use dry mint leaves, if you do not have fresh.
• For serving:
• Additional table salt to taste.
• Small ice cubes or crushed ice
Instructions

I used to be into martinis. With gin, vermouth, a dash of orange bitters, and olives. Stirred, not shaken.

When I was quite young, Pa would bring home A&W root beer in the brown glass gallon jug (RETURN FOR REFUND) with the finger loop on the neck. Icy cold, straight out of the fridge, mmmmmmm boy, gooooo-ood! Later on they switched to waxed paper milk cartons, boo, and then,

in cans, fugeddaboudit, never half as good as out of the jug.

Well water straight out of the hand pump out back of my Granma’s house, so cold it’d give you an ice cream headache.

Nickel Cokes from the red and white steel Coke machine, in those little (6 oz?) glass bottles, me and my sister would each get a nickel for one when we went grocery shopping, after Ma got up to the checkout.

Shitfire, I’m turning into my

OK, about 12 or 13 years ago or so, before my kid was born, we got our first blender.
For a whole summer, me and a couple of buddies went Margarita nuts, you could get Cuervo Gold AND Jose Cuervo Margarita mix at the Wellcome around the corner, man we went apeshit on them suckers, blended but not slushy, I tell you, hot Taipei Friday night after work, one or five of them go down real good, man…