On topic please. leave the debate for the hate W thread.

To me this is a much more perplexing question than the ‘Why do so many people hate George Bush?’ one.

As a European and not necessarily a Bush enthusiast, here’s just a thought … maybe people like Bush because he’s the only leader to dares to take on leftwing dictators and islamic fundamentalists with more than just words?

In Taiwan, Bush’s willingness to take action outside the UN should also play well … because if China ever attacks Taiwan (a big if, I know), Taiwan will need support from countries that are not afraid of the UN and its veto holder China.

It’s just like high school. The dumb jocks are popular (especially if they’ve got a rich daddy), and the bright ones are the geeks and nerds. (Al Gore)

and Toesave, Fear doesn’t work for me, unless 50% of american voters are serious s&m types.

First to really demand education reform. Have seen charter schools going ahead. Hell even the mayor of Washington DC is supporting them now. Hurray George W.

Thanks for the two tax cuts!!!

Third, thanks for doing the difficult tasks that no one wanted to take on. Dealing with Islamofascism. Look at the progress in two years. The US has been getting the hell bombed out of it and its planes, and embassies and citizens for three decades. Gosh in two years look at the progress. What can he do in six?

The Liberal and Conservative position are like Woody Allen’s spoof on Liberals. “But he had a bad childhood…” remember what this did for crime in America until Republicans like Giuliani came and cleaned the fuck out out NYC? Now it is time to do this with the Islamofascists and I expect similar results. Okay, you had a tough childhood. You want to obey the law like everyone else or do you want to get punished like everyone else. Choice is yours.

Thanks for talking tough with the UN and Europeans and getting this all out in the open. Better than calling a spade a space and the French assholes than papering over these little problems. At least, we all know where we stand now.

Many Americans like W because he’s got a big pair of kahunas. 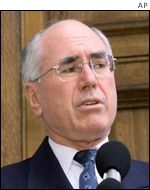 JH has got bigger balls than GWB. More Australians were opposed to the war than Americans. He still survived the protests and is now very popular.

By the way, W will be in for another 4 years. The Dems are in total disarray. The only electable Dems (the General and the Jew with balls) are not going to win the nomination.

Howard ‘The Duck’ Dean wins, and gets crushed by W.

Comforting to those who did poorly in school?

He’s a religious leader and his demographic is white middle-class, church-going, god-fearing middle Americans. Religious baloney heads will swallow anything in the name of god. God Bless America!

He’s a religious leader and his demographic is white middle-class, churchgoing, god-fearing middle Americans. Religious baloney heads will swallow anything in the name of god. God Bless America!

I like W and I’m only white… maybe middle class too.

I forgot to add beer-swilling. So there, you qualify on three counts.

[quote=“Alleycat”]I forgot to add beer-swilling. So there, you qualify on three counts.

The Bavarian Illuminati knows all about why to like Dubya, but they’re not telling.

[quote=“Mother Theresa”]Comforting to those who did poorly in school?[/quote]I doubt it. That would mean every English teacher in Taiwan has a shot at the leadership of his/her country.

It’s easy to spell “Bush” and Dubya is a puissant nickname?