Why is plagiarism so rampant here?

UT Austin is full of Chinese students too. I think they take them because they have money that the school desperately needs. Trump and COVID 19 caused a lot of schools to suffer financially. Those Chinese brings in a LOT of money.

There’s a real anti Chinese sentiment these days to my surprise with the European students in my class. I’m friends with a guy from Prague who is well aware of how the Chinese bullied his city. It seems normal citizens feel more negatively than the European leaders that are willing to take Chinese money.

Plagiarism is rampant in Taiwan companies. Over the years of editing various documents I estimate only 10% avoided copying text from other companies’ documents. Once companies started uploading various documents to their websites copying became the norm and even suggested by bosses to save time. Why not? Only when a customer complained did they care.

But we’re talking about people getting undergraduate degrees. 95% of them are not going to be publishing papers at all! So it’s weird to expect them to write in decent English. They should just write in their native language. Because otherwise since their English is never up to scratch they’re going to plagiarize no matter what. Chinese is a hard language even for Chinese people to learn, I mean it’s a 4000 year old language. It would be like if everyone has to be an Egyptologist and learn Hieroglyphics to get into college. Written Chinese language is at least that old. Then on top of that they must learn English, with all the nuances and confusing grammar rules. Nobody in the US is expected to do any of that for example. They just needed to get good at English and even they struggle at that.

I find almost all of this paragraph illogical. Chinese undergraduate students can write assignments in their native language…by going to a Chinese university rather than one in another country, where the language of teaching is either the language of the country or English (for international students in countries where English isn’t the first language). I don’t think it’s too reasonable for Chinese students (or Polish students, say) to expect to be able to go to a university in another country and submit all of their assignments in whatever language they want.

The ages of languages seem irrelevant to the point being discussed. All languages are pretty old, no?

What I mean is Chinese students are also expected to write assignments in English in China. So you can’t expect them to write it that well considering unless they’re doing a lot of business they won’t use it ever again.

Oh okay, fair enough - I thought we were talking about universities outside China.

They still probably don’t understand the concept of plagiarism, and haven’t really encountered it before. Quite likely they’ve been doing this for years without anyone even telling them it’s wrong.

I have this sense as well. It’s odd. With some students I get that they probably know plagiarism is bad and still do it because they think they can get away with it or they just don’t care about the class . But with others it does seem more “innocent” - like they are conscientious students who seem to care about learning, but who then turn in completely plagiarized work. As you say it’s like they don’t think they are doing anything wrong. It bewilders me as well, and it’s disappointing because I know they can do better. Are they really taught that plagiarism is acceptable?

I think the strategy of assigning smaller assignments earlier on to have them figure out the deal with plagiarism is a good one. I’ve done something similar with another class in grading drafts before having the final version due, but I let my guard down a bit with this class.

So plagiarism does not happen when students write in Chinese?

To be clear, this particular class is an elective, so students are not under any obligation to take it. Also, it is advertised as a class taught in English with a heavy writing component. They know what they’re getting into.

plenty of high school involves just memorizing and then transcribing relevant Important Passages From The Past, with no citations or indication of quotations.

Idk how that relates to plagiarism. That’s the equivalent of quoting Shakespeare for English exams. Who would add citations when referencing Shakespeare?

I guess they still make you even though 90% of the people out there knows what Shakespeare looks like.

Is super annoying if the professor is a dumbass. I’ve had professors fail me because they didn’t realize my score is high because I put the paper questions in there. And I’ve had high scores that was 100% original work.

Just to bring this thread to a head.

I am grading a major assignment and about half are blatantly plagiarized. Just whole paragraphs lifted from published journal articles.

The other half, the quality is horrible (w a few exceptions) but at this point, sad as it sounds, it’s a relief to read them because at least they haven’t been plagiarized.

Why??? These are senior undergrads, and masters and PhD students. ???

And yes, it’s clearly written in the syllabus that plagiarism will not be tolerated, and we discussed it at length on the first day of class.

Don’t people know to paraphrase it in a way that wouldn’t come off as plagiarized?

Is super annoying if the professor is a dumbass. I’ve had professors fail me because they didn’t realize my score is high because I put the paper questions in there. And I’ve had high scores that was 100% original work.

Very true. You have to filter out references/quotations/short phrases and check what parts are highlighted. Using items from published surveys must also be excluded. I always give students the full report from Turnitin and have always given them a chance to explain. Some have copied with the intent to paraphrase and cite, but handed on an old version or simply forgot.

To be clear, I seldom fail students. The one case in particular, the student directly copied complete paragraphS from a website. I showed her the website, with the EXACT content and she still claimed they were “her words.” I spoke to her privately during the break, but she started to yell at me in front of the class and then wrote a letter to the school to complain that I made her lose face. Actually, to be more accurate, I gave her the option of dropping the class (which she did) instead of a failure. Sometimes I just feel so FML…

Haha. I see what you did there.

Just to bring this thread to a head. 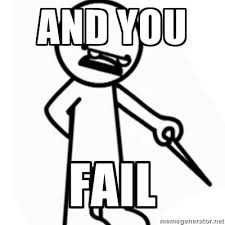 Usually professors are pretty reasonable about it, there was once in my undergrad that I did write very closely to what the textbook wrote because I was taking notes of the important definitions. I forgot I pretty much took those definitions word for word and used them without referencing it. But you could tell my explanation made sense because everything else was fine.