Another shameful chapter of British history. Even after the war started, officials in the Foreign Office were willing to give Europe to the Nazis all for the sake of Empire.

A British amateur diplomat tried to stop World War II by offering Nazi Germany rule over Europe if the British Empire could rule the rest of the world, according to secret files declassified Sunday.

James Lonsdale-Bryans, a well-educated fascist sympathiser, flew to Rome in the early days of the war to try to negotiate the deal with Ulrich von Hassell, the German ambassador to Italy.

The Security Service files reveal that the Foreign Office was aware of what Lonsdale-Bryans was up to and their unease about his actions.

“It would appear that Bryans may be taking part in unofficial discussions for the benefit of troops under the auspices of education officer,” the file read.

"Bryans’ idea is that the world ought to be divided into two parts.

"That Germany should be given a free hand in Europe and that the British Empire should run the rest of the world.

“I am not sure that this is a very desirable point of view to publish at the present time.”

“Bryans is a talkative and indiscreet fellow who is in possession of a story which he delights in telling and which if told publicly would be likely to cause embarrassment to the Foreign Office,” the files read.

To the further annoyance of officials, he also tried to discuss his plans with top US officials, including Dwight D. Eisenhower, who during the war was Supreme Commander of the Allied Forces in Europe.

That led Britain to reassure the Americans that Lonsdale-Bryans was “unreliable though not disloyal”.

The level of backing given to Lonsdale-Bryans by Halifax and the Foreign Office is unclear, but one hand-written note from the Security Services explained: “He went to Italy with the knowledge of the F.O. in order to develop his contacts. He greatly exceeded his instructions.”

It was feared that Lonsdale-Bryans would take his story to the press.

A Foreign Office letter explained: “Although there seems to be a good deal to be said for locking him up to prevent him airing his views to all and sundry, I understand that if this is done it will inevitably involve his bringing up the question of his contacts with the Foreign Office and the facilities afforded him to go to Italy.”
news.yahoo.com/s/afp/20080830/wl … anyhistory 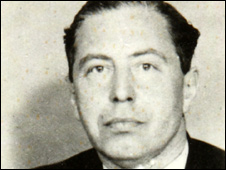 You left a key word out of that heading, amateur - whatever the hell an amateur diplomat is - but I’m sure that was just because it wouldn’t fit on one line and not because it lent more bang to your whimpering buck to drop it.

A private operator and a loose cannon, not a voice of the government.

Off topic - reminds me of Kazuo Ishiguro’s Remains of the Day.

There were quite a bit of Nazi sympathisers in the US and Britain, some government officials, some nobility (perhaps even royalty)… fascism was seen as the solution of the day. and?

This is hardly news. It’s well known that Hitler never wanted to fight Britain. He conceived of a world divided with the U.S. ruling the Americas, Japan ruling the Orient, Germany ruling continental Europe, Britain keeping her Empire, and Italy…well, taking whatever the Italians could get (we all know how miserable their performance was in the Big One).

It’s funny how that all these years later, the cookie has sort of crumbled that way anyway.

Bloody great idea if you ask me. The sausage-eaters get the eyeties, the gyppoes, the dagoes and the onion johnnies and we get all the rest. He should have got a damn medal.

Yep, another of those Tory appeasers- thank God the Labour Party, over the opposition of the Conservatives, insisted that Chamberlain be replaced with Churchill and not Halifax.

[quote]Lonsdale-Bryans had the ear of several members of British Parliament, including Lord Halifax, but the level of support of said MPs is unknown. A handwritten note by the MI5 stated:

MI5 decided against arresting him, due to the possible support he was receiving from members of Parliament (potentially including Neville Chamberlain), and the embarrassment this would have caused.[5] When Winston Churchill succeeded Chamberlain as Prime Minister, he had Lord Halifax replaced and Lonsdale-Bryans’s political influence disappeared, along with the potential threat to British opposition to fascism.[/quote]

Edited- Earlier post said Hamilton, not Halifax- all those damn Eastern cities sound the same to me.