The perpetrator, Li Cheng-long is a former New Party Taipei city councillor, and current member of the Chinese Unionist Party (中華統一促進黨). He was recently charged with throwing a molotov cocktail at a TCG office, setting the front gate ablaze, which he defended by stating “throwing molotov cocktail is a form of freedom of speech.”

Li apparently doesn’t agree that a Japanese should be honored with a statue here in Taiwan, and decided to damage it following a stream of CKS statue beheadings. He had originally planed to have the head fall off on its own during the Yoichi Hatta memorial ceremony on May 8th, however he was incapable of pulling off that intricate a plan, so he opted for sawing off the head of the statue at night along with two other accomplices.

I bet this will help energize the massive “let’s be annexed by China!” crowd in southern Taiwan.

All these pro-unification clowns need to just move to China.

Attention ****** (seeker). Looks totally unhinged. I’d wonder what he was taking when he did that -very bad quality stuff, me thinks. Wrote long FB posts, one saying: Look Hung Hsiu-chu, look Ma Ying-jeou, look Tsai Ing-wen, what I did… Literally a LOOK MA! NO HANDS! kind of stunt.

Insists this is free speech. Wonder what he’d do in places where they actually have no free speech.

Worse. He did not do it alone. The smiles of satisfaction in his posse give me the chills.

I wonder how a single life sized statue of an engineer sitting at ground level thinking about an water engineering project represents colonialism to them, while giant bald dude in military uniform perched on a pedestal doesn’t.

I didn’t realize these statues were hollow like those chocolate Easter bunnies. Reminds me of my sense of outrage when I first discovered that as a kid.

If the statue was solid metal, it wouldn’t have been so easy to lop its head off. If Li Cheng-long was so outraged by what this Japanese engineer did, he should have destroyed Wushantou Dam while he was at it.

Don’t give him any ideas.

Don’t give him any ideas.

Oops. Well, he’ll probably be lynched if he shows his face around Tainan again anyway.

Because they insulted Glorious Leader and his progeny by calling Hatta The Father of Water Projects in Taiwan, when Chiang 1 and 2 among them created all the remaining dams currently in existence. To give thanks to anyone but The Revered Leader -a la NK- is sacrilege and must be pusnihed severely.

Don’t give them ideas! They already hate it enough.

mmm, I wonder if that is teh reason why they won’t invest in maintenance?

Bonus points if Lame English is inside when they demolish it. 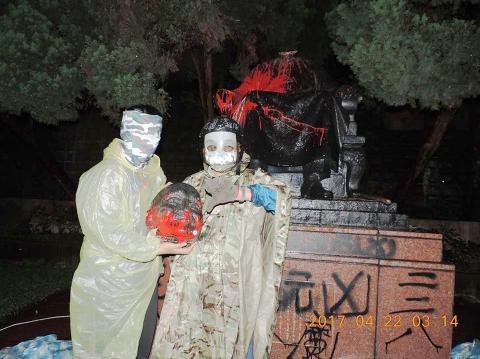 A statue of Chiang Kai-shek (蔣介石) in Taipei’s Yangmingshan National Park (陽明山國家公園) was yesterday found decapitated. The statue in Yang-ming Park was beheaded and had red paint smeared over it with a message saying: “228 mastermind” and “serial...

The move was to “appease the ghost” of Japanese engineer Yoichi Hatta — known among Taiwanese as the “Father of the Chianan Irrigation System,” the group said, in reference to the beheading of a Hatta statue near Tainan’s Wushantou Reservoir (烏山頭水庫) on Sunday.

“Cut down one of ours and we will cut down countless of yours,” the group said.

This is the part I’m confused about:

“Chiang Kai-shek was the mastermind of the 228 Massacre. It is a universally accepted fact that he was one of the ‘big four murderers’ in history,” the group said in a statement.

Is that what they teach in history class now, around the world?

It is a universally accepted fact that he was one of the ‘big four murderers’ in history,”

Seriously? I doubt Peanuthead’s even in the top 100. These clowns really need to get out more.

LOL, I thought the Big Four would be Mao, Stalin, Hitler and Pol Pot, with McDonald’s as the runner up.

Seriously? I doubt Peanuthead’s even in the top 100. These clowns really need to get out more.

You do know that Chiang baldie breached the yellow river dam on purpose killing just short of a million, and then starved millions to death subsequently, leading to the civilians along the yellow river to aid the Japanese instead?

He’s definitely not in the top 4 though. Let’s rank!

Depending on who you ask. If you count those who starved to death in the aftermath of the dam breach, then Chiang would rank number 4.

From Mao and Hitler to Saddam Hussein and Pol Pot, see the tyrants with history’s most lethal regimes.

Depending on who you ask. If you count those who starved to death in the aftermath of the dam breach, then Chiang would rank number 4.

What about Japanese emperor Hirohito? He’s five on that list, but the Japanese caused millions of death by starvation in South East Asia which might not be on that list.