First cuddle couches, now bunk beds… what will those crazy Kiwis think of next? 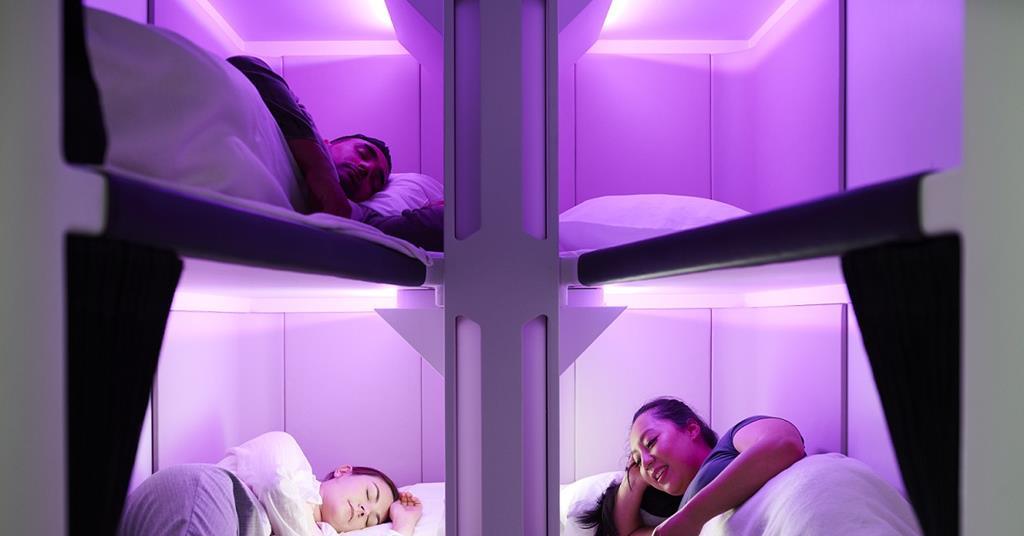 Air New Zealand has filed patent and trademark applications for full-length sleep pods in economy class, as it mulls installing them on its ultra long-haul routes. Unveiling the Economy Skynest, the carrier says it will decide whether or not to... I think you have to pay for the extra seat (it’s in the rows of 3, so 2 people get 3 seats in effect) though with their “Sky Sofa” or whatever it is called. China Airlines had the same for a while, but gave the idea up.

Does that mean Chinese are more inhibited than Kiwis when it comes to PDA?

The idea with these bunk bed pods is that you have a seat anyway but retire to the bed whenever you like. They could save space by having seats that switch to beds and back again (like on some trains), but maybe the need to make them sturdy enough for a potential crash complicates that. Also, there’s more variation in when people want to sleep on a plane vs. on a train.

It won’t be implemented.

Airlines have such a thin margin that they have to carry as many passengers as possible to break even. So you might see something like this in first class or something, but not economy.

not to mention certification and stuff.

Airlines have such a thin margin that they have to carry as many passengers as possible to break even. So you might see something like this in first class or something, but not economy.

The idea is that these will be a “shared resource”, you pay for an economy seat and then you pay extra for bunk time, the same bunk could be sold multiple times during a flight depending on how long each passenger wishes to use it for.

It looks too short for us taller people. I honestly wish I was shorter now that I don’t really play sports.

Fact is, it will either be a first class luxury or it will be extremely expensive that few if anyone will ever go for it. But first class doesn’t really need it because their seat can recline completely horizontal.

Fact is, it will either be a first class luxury

If I booked first class and someone presented bunk beds I’d walk off the plane! First class, indeed business class already has far, far superior products on all but the shortest flights. This is specifically designed for the economy market in order to sell the same space multiple times in addition to a standard seat.

you can have probably about 20 seats for the amount of space the bunk beds will take up. Airlines won’t go for that. Unless someone wants to pay business class prices to use bunk beds.

Airlines won’t go for that.

I think I’ll go with what an actual airline is doing.

Air New Zealand has filed patent and trademark applications for full-length sleep pods in economy class, as it mulls installing them on its ultra long-haul routes.

we’ll see how long the airline stays with it though. Plus patent/trademark is still just one step. It will have to be certified by the FAA or relevant air safety agencies before it can actually be used. You know many airlines are dumping the A380 because it’s too big, meaning fewer airports take it, and it’s a challenge to fill up a plane that big.

It looks too short for us taller people. I honestly wish I was shorter now that I don’t really play sports.

I have a 2m bed, and my feet still just barely fits unless I sleep with my head very close the to edge. You are assuming people put their head right at the edge, which doesn’t work if you have a pillow. And you can clearly see the feet side at the end pretty much cuts to a tiny width.

And Ryanair boss Michael o Leary has been saying hes going to charge for the toilets for thr last twenty years and you can get your next flight for 1 pound if you snap it up quick and everybody will be standing on his planes . It’s called marketing.

Just remember that most Economy Seats are at best 20"/50cm wide (Emirates squeeze you into 17" even on their 777’s), so even allowing for the armrests that’s about 65"/160cm for a row of 3, so most male adults wont be able to stretch out. I’ll take legroom any time, just as long as I can straighten my legs out every now and then. This Airline is Brilliantly Trolling Emirates Over its 'Gerry the Goose'...

Emirates’ latest multi-million-dollar global ad campaign has just launched after more than 14 weeks in the making and countless hours of CGI trickery. Teams of artists and filmmakers in Dubai and London have been working on the campaign which brings...