Storms and freezing temperatures have ripped huge sections of the U.S. Over 100 million people are under weather warnings and power lines are down and pipes burst. Must be especially bad in the south where they’re not used to temperatures going so low.

I’ve got cousins in Georgia and Florida and friends in Chicago- hope they’re alright.

That’s a pretty epic winter for the US, sad I missed it. Huge sections of 6"-24" of snow across the south is impressive - I think they broke many 100-year-old records. 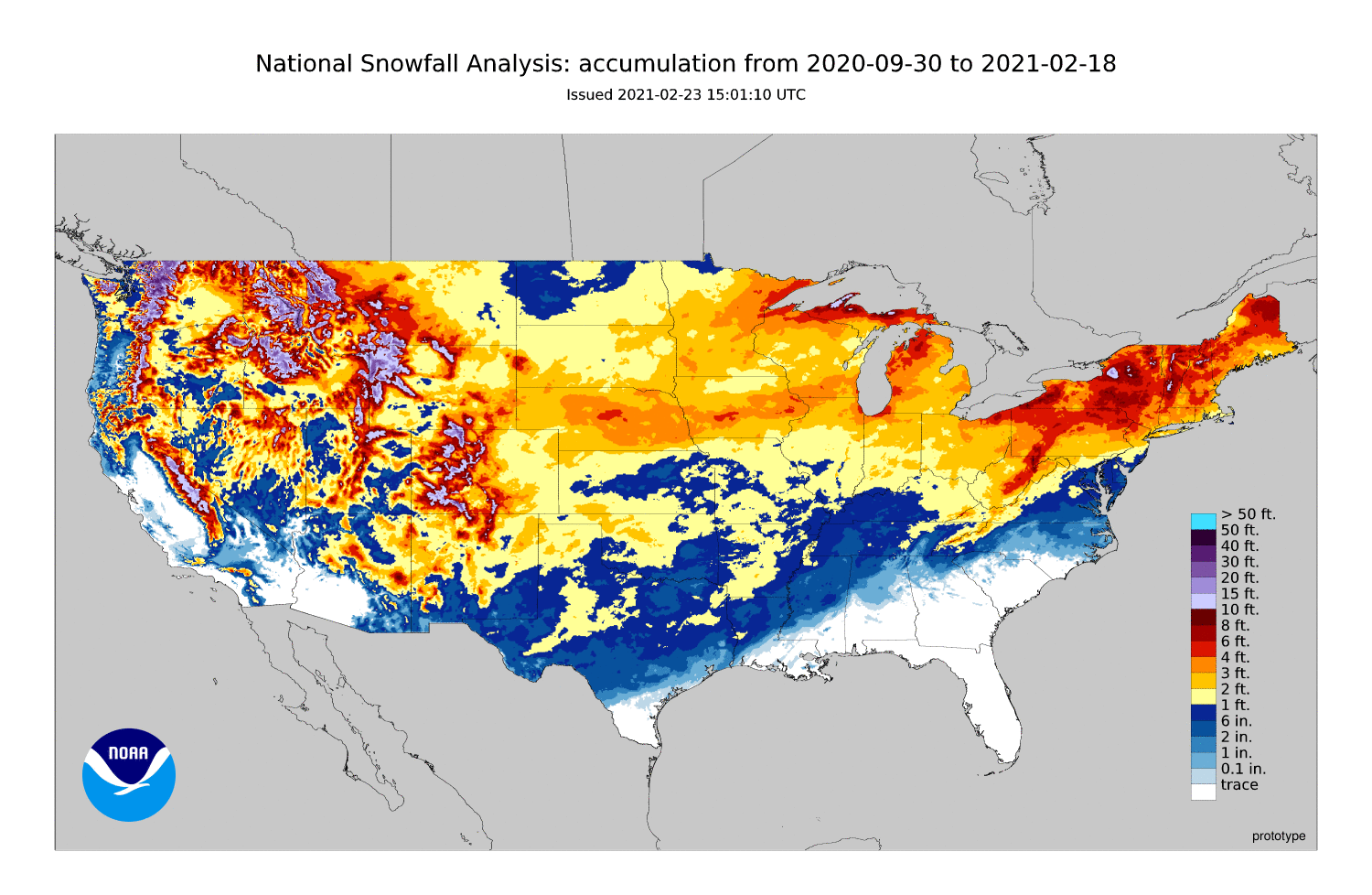 But then again climate change (can’t call it global warming, because it’s not clear it’s actually warming) is supposed to mean more extreme weather event, both cold and hot.

And the green energy movement isn’t helping because they will not include nuclear at all. Renewables + fossil fuel is about all they are willing to consider.

A lot of the issues that get ignored in these weather events is just human stupidity. I’m all for lowering CO2, if not just for health reasons from pollution. But I wrote my paper on climate change risks for banks in Switzerland, looked at data for why the increase flooding and damage. Weather data was all inconclusive, there was maybe slightly more rain in spring but nothing actually statistically significant.

Turns out, in the last few years banks are giving out ridiculous amounts of mortgages and loans for projects in places are supposed to absorb rain water. The biggest cause of increased flooding was just that rather than the climate. The biggest risk to banks was greed, not climate change.

So why are banks financing places that would get destroyed by flood water? Why would they finance places knowing it won’t last? Are they just up for giving people false hopes and then demanding interest payments from them after the flood destroyed everything?

So why are banks financing places that would get destroyed by flood water? Why would they finance places knowing it won’t last? Are they just up for giving people false hopes and then demanding interest payments from them after the flood destroyed everything?

It’s not necessarily banks that are the issue, investors are looking for something to put their money in. Interest rates in Switzerland is like low to negative, so they are looking at building things in the countryside towns to invest money. Most of these towns have a declining population as well as more people head into cities, which makes this even more stupid.

And banks are too stupid to see through that?

Because I want to know where can I find a bank who will loan me a few million dollars to build a bridge to nowhere.

And banks are too stupid to see through that?

Their only risk is the mortgage taker not paying back. They aren’t just giving it to random people, they obviously look at your credit history and income.

I had gotten my FICO to 730s easily working there for 3 years. At that score borrowing money from banks there is pretty much “your wish is my commands”.

But it’s much harder to secure loans in Taiwan. Banks here are conservative as hell and there’s no institutions like FICO that banks base their mortgage decisions on. Here it’s all based on collateral. Much easier to borrow (even on bad credit) to buy something the bank can put a lien on than just borrow money to do whatever.

Such as a CNC machine… those thing cost enough that you need a mortgage to buy, but because the machine is so big the bank can put a lien on them. Much easier for me to buy that than to buy some used manual lathe from the junkyard. Banks rather give me 2 million than 50,000nt because the former is easily traced.

Actually I could probably do that if I could figure out how to afford the 30,000nt a month payment on the machines, like products I can make on them which I can sell to the states or beyond.

Storm? It’s a blizzard not a storm.

build a bridge to nowhere.

Storm? It’s a blizzard not a storm.

It’s a cocker spaniel, not a dog.

Their only risk is the mortgage taker not paying back.

Which they are insured for.

Did it go anywhere?

OTOH, a white horse is not a horse.