Before and After Animal Rescue Pictures :)

I’m very happy to have been directed to this section of the forums.

I am new to Taiwan, but not to Asia–and I have seen my share of animal abuse and strays. I’ve done what I can to help, with shelters and organizations, and have–like many people here in these threads–put great effort into doing my part to rescue animals on my own.

If there is a thread similar to this, my bad for double posting. I thought it would be uplifting for people to share their own images of how poor, mistreated animals have managed to find happy homes and some love.

I would like to thank everyone here for putting so much time and care into helping these poor animals. I am quite impressed with the community here. It is not what I am used to. I will be getting as involved as I can here. :bravo:

I will also be looking to adopt a cat soon, and will be following the links provided here to find a shelter for a kitty in need–or I will simply adopt one of many strays I’ve befriended in my area–or help someone who has a cat they can no longer care for.

Here are a couple of adorable kitties I rescued in Seoul (please post your own if you haven’t already; it’s amazing to see what a little love and care can do):

Here are a just a few BEFORE and AFTER photos I have. Some of these furry friends are still up for adoption. If you are interested in adopting, you can view more photos here: flickr.com/photos/bark-taiwan/
Contact me at Natasha@BARK-Taiwan.org for more details.

Here’s Macaroni BEFORE with her sister, Spicy:

Donny & Marie BEFORE (aka Bacon & Biscuit):

Donny & Marie NOW in their temporary foster home: (they are ready and waiting for the ‘purrfect furever’ home) :

Cucumber AFTER (aka CUTEcumber. She got adopted shortly after this photo was taken- about 2 years ago. Just last week she emmigrated to South Africa

Guacamole AFTER (now namd Bean and living happily in Australia):

Tropper AFTER a little while:

And Trooper AFTER several months with his new mommy:

Lucky AFTER (Lucky is ready and waiting for a ‘furever’ home):

WOW…Cucumber and Bobo…just amazing…it’s really great to see these. Warms my heart, truly. Thanks for the link; I’ll be adopting soon.

I would like to thank those who have sent me pms for starting this thread. I guess I’m a bit of a noob with these forums and don’t know how to reply (says users do not exist). Anyway, thanks for all the kind words and for those who’ve done so much work here in Taiwan with animals in need.

Suffering through ignorance. Xiao Wang Zi, a few months ago, at around his first birthday,
after being weaned at two months and then probably fed as a dog, a couple of meals a day, rather than as a horse, ad lib.

And a week or two ago

LadyBird, you’re amazing!!! All of you are! Now can somebody tell me the quickest way to get a photo on this thing?

I think I figured it out…maybe…
Vic before (found him with a metal tramp clamped to his paw.) 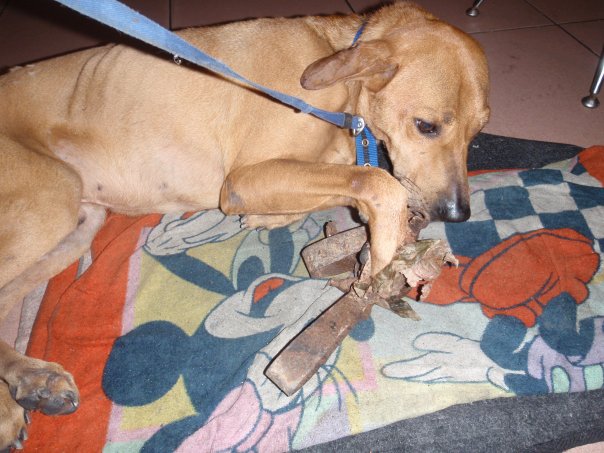 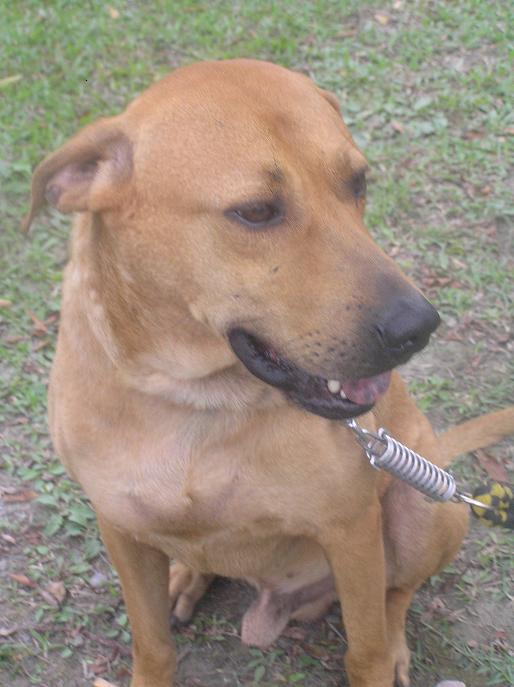 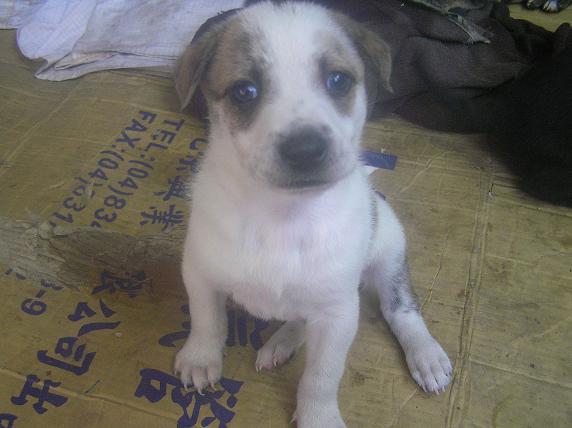 Seven After (Coolest markings EVER!): 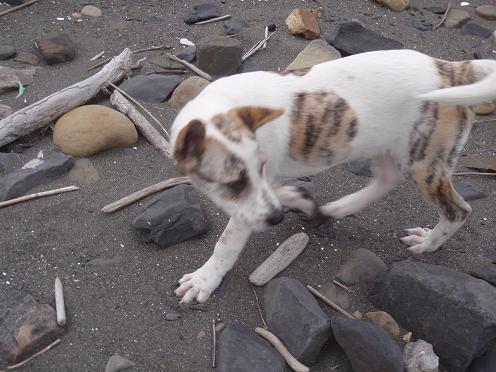 Lore lore NOW (LORE IS UP FOR ADOPTION!!! She is spayed, vaccinated, house-trained, and absolutely an AWESOME dog! So loving and snuggly and gets along well with everyone including children.)

(So amazing how dog’s legs can heal!)
Pup who’s collar was on so tight it was digging into his skin- he was perfectly calm when I cut it off of him, like he knew I was trying to help him- and he’s never let me touch him since

he still lives on the beach near my house.

And now the one’s I kept:
Xiao-mao/Slo-Mo before(She had some skin fungus so had to be shaved):

Xiaomao/Slo-mo after (this is how she likes to sleep every night- with my hand for a pillow=):

And I don’t really have any before’s of my two babies, Dresi and Rom- basically they were both just skinnier. Who ever abandoned these two missed out on the best dogs in the world!

Funny story, Dres and Rom look like twins, but I found them 3 months and 30 miles apart. Vet says they’re about the same age and they’re pretty unique looking for Taiwan. I wonder if they’re from the same litter?
And now, the one I lost =( Had her for two weeks but she died when I was trying to ween her from milk to solid food. Babies are so tricky

That’s why I think LadyBird is so amazing for saving those teeny kittens.
Irons never would stay still so I could take a cute pic:

Unless she was sleeping on me:

In hindsight maybe I should have named her Kelly, after a surfer who actually lived…
Anyways, thanks, so nice to both see and post success stories! We can’t save em all but we can change the world for the ones we do save.