Avatar2 arrives next week (Dec 14th). Still trying to decide between normal and 3D; however, I do want to see it on the biggest screen I can find in Taipei. IMAX is probably a rip-off, so I’m talking about regular movie theaters.

I saw a news clip from a couple years ago about a new Showtime theater in Kaohsiung that has a new large screen. Made me wonder if there’s anything like that in Taipei?

What’s the biggest screen you know of in Taipei?

If you went see Avatar 2, which movie theater would you pick and why?

Movie theaters in Taipei are old and outdated. I believe there’s a big IMAX screen in Banqiao, and one in Miramar. The one in Miramar however sucked the last time I went there. Tiny theater, if you’re not at the last row you’ll have a sore neck

Yeah, that’s why I said IMAX would likely be a rip-off. Last one I tried was in Ximen a few years ago, and the theater itself was tiny, like the cinemas in the mall where they try to pack 24 separate theaters in one megaplex. I was shocked that they could sell tickets and even call them IMAX.

Any case, back to the main topic, that’s why I’m looking for information on regular theaters.

I was going to ask this. Also for Taipei (old or new).

Was or is Miramar Cinemas 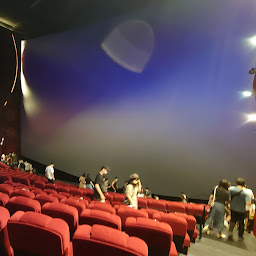 IMAX here sucks…not sure about the rest

IMAX here sucks…not sure about the rest

Center far seat IMAX is amazing, especially the sound quality and sound stage. The viewing angle from the rest of the seats look too uncomfortable so I never tried.

Any thoughts about regular theaters?

Gonna bump this thread again. IMAX in Miramar has only the 3D version of the film. I would like to not wear 2 sets of glasses for 3 hours…

I knew someone was gonna mention that, but contacts are not suitable for everyone unfortunately

Maybe I shouldn’t be, but I’m kind of surprised that nobody has any comments at all about normal theaters.

IMAX HFR 3D is the only way to watch this. It was literally made for it.

They still make 3D films?! Why?

Please watch it in 3D and on the biggest possible screen. The technology has evolved and James Cameron deliberately advanced them for this very franchise.

What movies are you watching (2022) Arts & Entertainment

The visuals seemed totally fake CGI or computer generator or whatever just distracting me from being interested in anything else. So I guess the latest Avatar will be similar. I’m imagining it to look like one of those fake fish aquariums that you display on your tv.

watched it last night at a smallish theater in gong guan…not 3d not titan but big enough to get an idea. (broadway cinema in the same building as “the wall” i think 220nt after bankcard discount)

its too long 3:15 hrs or so… the “action sequence” at the end is so so, it could have been far grander than a few boats … (i know its not an action movie as such but…)
in part this film is aimed at kids, soft deaths etc… but its far to long for the one kid that was in the theater he was just disruptive after 1.5 hrs.

the film seems to be a filler or set up for the sequel and the obvious appropriation of pacific culture kind of made me cringe tbh.

the whole thing reminded me of a pretty screen saver. i guess 3hrs can be considered good value for money. but make sure you have an empty row because everybody in the theater had to goto the bathroom after 2 hrs of drinking pepsi.

there is A LOT of swimming in the water with “wonder” music … like a lot.