Checked my receipt at Carrefour today and noticed that i’d been over-charged on an item that was ‘on special’.

I was told that this was a ‘one-off’ mistake but when i asked to have my groceries re-tallied, it turned out that i’d been over-charged on at least one other item that was also brightly advertised as being ‘on special’. At that stage i demanded to see the manager who insisted that it was just a ‘two-off’.

However, i suspect it goes much further than that and i wonder how often this practice is going on.

Haven’t seen this at Carrefour, but sometimes those 7-Eleven discounts if you buy two of the same item won’t work automatically. In such cases, you have to question it, and then they push another button on the cash register, and suddenly the discount is calculated. I think that happens to me like one out of every five or six times.

sometimes those 7-Eleven discounts if you buy two of the same item won’t work automatically.

That’s really not cool. The question is: Is this gross incompetence, or, a delieberate scam. Knowing what i do from my line of work, i’d be pretty sure it’s the latter. Either way it would be netting these stores several million per month.

Is there a consumer watchdog type body in Taiwan?

The receipt showing a bottle of Absolut Vodka for $499. The advertised price was $375

Was it on special with a different yellow tag, or was it on special with a new red price scrawled on it? I sometimes see the latter in the dairy section. For the red price stuff, the discounting is a little weird - they told me something I couldn’t quite understand about needing to get it processed elsewhere. For the yellow tag, yeah, that’s a problem. I haven’t noticed that problem before, but I haven’t been looking for it either - I will now.

Yep, common occurrence at Carrefour. They always blame the computer. I usually play close attention to the cash register to see if the discount shows up and my wife checks the receipt for anomalies before we leave the store.

To be honest: it also happens at Quan Lian every now and then.

I used to notice this kind of thing a lot in HK. The confusing thing was that sometimes the error was in my favor. Maybe it wasn’t just fraud or incompetence but a combination!

I have had the same thing happen to me at Costco. Usually on the single day specials. Check your receipt before leaving the register.

I got a great deal on some salmon a while back, sometimes they screw up.
But it’s very helpful to check to see if it’s a ‘thing’.

Usually it’s a result of misleading advertising, like you need to buy two or something.

Carrefour is nothing compared to 7-11.
Did folks notice that many of the products in 7-11 don’t even have prices these days?

7-Eleven also uses dishonest pricing. For the more expensive products you won’t find a price tag or there’s a wrong price tag. Like these Ritter Sport chocolates, 100 NT$ a piece (click on the image, it’s possibly not shown in its entirety) 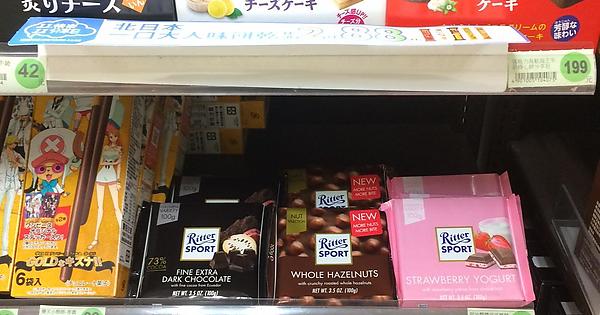 Did folks notice that many of the products in 7-11 don’t even have prices these days?

Heh, such a coincidence I just posted about 7-Eleven.

I have to say, I recently saw the same at Family Mart.

But 7 plays dirty. No price tag or the wrong price on the more expensive products. I don’t believe it’s a mistake.

The “buy a second for a discount” items, usually candy, in the Family mart and 7/11 generally never show up unless you specifically point it out. Need to be careful in all supermarkets on not getting specials and particularly on double scanning items, check the local Costco FB groups for many complaints on double charging from Costco. I think it’s more incompetence than deliberate and certainly not limited to Taiwan, in my home country some supermarkets were running a spot the mistake and get a refund and the item free program in order to try and rectify issues. My sister made a killing on miss-priced boxes of candy, she purchased 2 and noticed the price charged was different to the shelf price so got the 2 free, was back in the store a few hours later having forgotten something and noticed the price was still incorrect, 2 more free. Next day and it still hadn’t been changed so she loaded up a cart with the entire stock from the shelves and got the lot for free

Did folks notice that many of the products in 7-11 don’t even have prices these days?
Heh, such a coincidence I just posted about 7-Eleven.

I have to say, I recently saw the same at Family Mart.

But 7 plays dirty. No price tag or the wrong price on the more expensive
products. I don’t believe it’s a mistake.

Thanks for mentioning this. Yes, I’ve noticed the missing price tags - it’s fast becoming the norm on more expensive items. And it’s hard to believe that there’s been a sudden outburst of “mistakes.” It wasn’t this way before.

Thanks for bringing this up, I shop there regularly and I’ll keep an eye out from now on.

My friend insists Carrefour often uses this method…just not sure is planned or just poor link between sales items and back end II checkout system. He days has happened several times to him.

My friend insists Carrefour often uses this method…just not sure is planned or just poor link between sales items and back end II checkout system. He days has happened several times to him.

It’s actually the ‘perfect crime’ when you think about it.
It’s theft, basically, that can net huge amounts of money, but if you ever get caught, you just say ‘sorry, it was a computer mistake’

Interestingly, when i demanded to see the manager, i was surprised by how young he was, and how short-cropped his peroxided hair was. In fact, he looked a lot like one my own brethren

It happens all the f*** time at Careless. You have to check your receipt always. It usually happens in their benefit but sometimes it works to your benefit, the price charged being less than indicated on the shelf. I usually go back and buy more when that happens. It’s simple incompetence.

I cleared out their whole stock of Norwegian salmon for something like 20 ntd each a while back. So incompetence is definitely part of the picture.

I guess a lot of it is incompetence, but Taidong is so riddled with corruption that never gets investigated that i can’t rule out ‘systematic scam’ as a distinct possibility. At least on the local Taidong level for Carrefour. If you’re a local manager and you work out, ‘wow, i can put an extra $200 000 in my pocket today by fiddling a few prices’ then that’s gonna be a real temptation for someone with a flexible morality.

In fact, i do worry about the level of scamming creeping into Taiwan society, generally. It never used to be like that, was it? Sure, it was happening on the underworld level, but after the gangsters moved into politics, it seems like it’s filtered out through society more

Probably they do have local managers who skim the difference, it would add up in a big store.

I don’t see any extra scamming per se over the last few years but Taiwan business people are extremely cutthroat, friends to enemies in an instant. Scamming each other for the big money is normal.