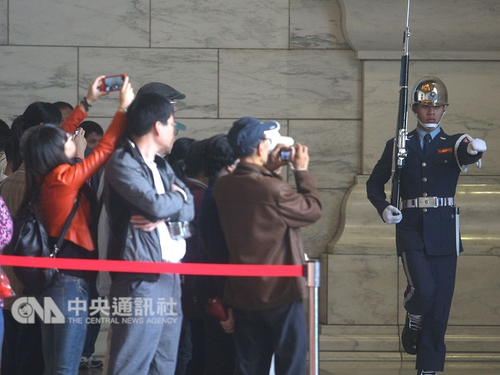 Taipei, Dec. 17 (CNA) The Transitional Justice Commission suggested Monday that the military honor guard at Chiang Kai-shek Memorial Hall in Taipei be discontinued as the complex is a symbol of the authoritarian period of Taiwan's history.

Should the guards be withdrawn from CKS memorial.

The guards have become a good tourist attraction as is the memorial itself as part of Taiwan’s history. They are needed to keep people from using the statue for rock climbing

If the guards are withdrawn then what about the statue of CKS , should that be put out somewhere or melted down?

CKS and the KMT May well have kept taiwan from being taken by the commies. They had the US support.

And if the statue is gone then what to do with that room , just keep it empty?

And if the room is empty then why have that big white building itself? Should that be torn down then and just use that space for another fish pond ?

Might be Chiang Kai Gone ( all statues gone and his mug from all Taiwan currency ) soon.

The complex, a popular tourist attraction and recreational area, should host permanent exhibitions of human rights and democracy, Yang said.

And they think an exhibition like that will attract tourists? What a bunch of frikkin idiots. This is why you should never put academics in charge of any important decision. Come to think of it, the president is an academic…

Koxinga was responsible for some atrocious activities, some if judged by modern day standards would be much more vile than what CKS ever did. Using the same logic, all temples dedicated to Koxinga should be torn down and converted to daycare centers in honor of the women and children he enslaved.

This silliness aside, there’s still the National Martyrs Shrine if tourists need to see the changing of the guard.

Or call it the Citizens Park. Or the Big Ass Park. Add a Venetian gondola ride. Or something.

Koxinga was responsible for some atrocious activities, some if judged by modern day standards would be much more vile than what CKS ever did. Using the same logic, all temples dedicated to Koxinga should be torn down and converted to daycare centers in honor of the women and children he enslaved.

This silliness aside, there’s still the National Martyrs Shrine if tourists need to see the changing of the guard.

Funny in all my eons on the rock I have never been to that martyrs shrine.

Keep the guards, change the memorial. Rename it the CKS VICTIMS Memorial.

I done a photo innit

Why do you think that? I find the wild lilies and the tangwai in the preceding decades interesting, and I’m sure many visitors would as well if presented right

I don’t think he’s suggesting to host the exhibition where the statue is now, but in the basement instead of the cks exhibition

They did it before …Democracy exhibition in the basement… I hate the statue and all his statues and pictures in the schools. I don’t care about the tourists.

CKS memorial is in my opinion one of the most beautiful buildings in Taiwan, nice colors , beautiful shapes. Can’t they just leave it alone or what do they suggest ? Replace it with Claw Machine shops ?

Are they suggesting to demolish he building?

My reply was more aimed at Tommy’s post than the article as he implies there would not be much point in keeping the building if it ceases to become a major tourist attraction and I can see that happening too. Although yes you are right in that the article only suggests that at this point they want to remove the statue and obviously most of the paintings and relics of the CKS museum below which are all based around Chiang. Why wouldn’t they just then knock down the building itself considering it was built for CKS

The guy was a dictator and not even a good one and is hated by grassroots Taiwanese. Sooner or later they have to move him out.

If a memorial for a brutal dictator is the main tourist attraction in Taipei, I guess that says a lot about the quality of Taiwan’s tourism…

I’d like to see both the memorial and the plagued Taipei dome flattened and have the new domed baseball stadium built at the Freedom plaza, and leave the Songshan tobacco factory as a park.

The guy was a dictator and not even a good one and is hated by grassroots Taiwanese. Sooner or later they have to move him out.

By grass roots Taiwanese you mean the small highly vocal group (Ming Nan Ren) pro independence supporters ? Who wasn’t a brutal dictator at that time in China ? Mao? You think Mao would have been nicer to the “grass roots Taiwanese” than CKS if he had taken Taiwan instead ? Most of the real Indigenous people (Yen Zu Ming) here support the KMT and don’t mind Chiang at all.

The world was a different place then.
Cks and his son Cck get credit in my book for keeping the ship of Taiwan sailing straight in difficult times

I agree with tommy there: it’s complicated. Yes, the guy was an asshole, but (as the Americans said) he was our asshole. The US management of CKS and his idiocy is one of the few success stories that emerged from post-war anti-Communism. And of course CKS did get one thing right: he spawned CCK, who basically paved the way for Taiwan to become a normal country. In other words, if it hadn’t been him in power, Taiwan might today look like Cambodia.

It’s funny how these things work out, and presumably all that’s necessary is to put up a few plaques and posters explaining what happened and why the monument is still there: “lest we forget”.

You didn’t do two years conscription for obvious reasons. Got off lightly with that one, I know folks who got sent to Kinmen said it was really bad.

Taiwan that time had a great economy and China was weak so it was just a very different time in that regards. I understand how a lot of people might look back at that time fondly. KMT are still popular or at least not unpopular in places like Miaoli which from the outside you would wonder why , but it’s because local relations between the different ethnic groups were never great anyway and most people care about food on the table More than anything. KMT did bring in the land reform act (probably under pressure to counter communism and build local support) which was a massive boost to peasant and tenant farmers all over Taiwan. Using their own land they could farm or they could get collateralized loans and build factories on their land. Many simply sold off the land and became rich from urbanisation .

The Japanese were very cruel to farmers they would take up to HALf their harvest in tax, they were reviled by some of that generation. If they found that you were withholding there would be harsh punishments. Also the Japanese would disappear people too according to my in-laws.in the countryside or by the time you came out 'you wouldn’t be the same person '.

KMT also bought support of all the civil servants and soldiers with incredibly generous pensions and benefits.

Uncle Sam helped Taiwan tremendously in the 50s and 60s you will hear many Taiwanese talk about how the food on their table and even the clothes on their back had ‘made in the USA’ stamped on it (true story…They would make clothes from the sacks of corn and wheat that were provided from USAID). That generation understand it’s America that keeps the show on the road here. Of course part of the reasons was because uncle Sam had bombed a lot of factories but I digress…

In the end though CKS and CCK were dictators, maintained martial law for a record period and CCK ordered the horrible assassination of Henry Liu and whole families through the local triads. We need to donate their statues to the commies since they Iove them so much now.

The “yuanzumin” support the KMT because their township chiefs are bribed every election with cash which they use to buy beer and Paolyta B to distribute within the Buluo. The KMT repressed indigenous Taiwanese for years and enforced sinicization on them.

By grassroots Taiwanese I mean all the Taiwanese who were already here in 1947 before the occupation of Taiwan by the KMT.

Christ man, the protests were for a reason, they were trying to wrest power off of the KMT. The process is still ongoing. I was in those protests, they weren’t that violent.