So most the few beaches that exist in Taiwan are either small, a pain to get to, or not good. Has Taiwan ever considered creating good artificial beaches in parts of the Island?

They could also think about using Seabins to clean up the currently existing ones. Simple design, anyone could make one out of old industrial parts.

EDIT: This article is OK but they are way overpriced at 3500USD+. You could make a similar design for 1-300USD.

Has Taiwan ever considered creating good artificial beaches in parts of the Island?

I think this is a great idea. Copenhagen (in Denmark) did it about 10 years ago, by building a large sand-bank/island in the sea just off the coast of the old gross beach. The new beach is many times larger and much much nicer. The lagoon between the new artificial island and the original shoreline has hardly any current and is calm even in strong wind, making that area ideal for children and inexperienced swimmers. My understanding is that in Taiwan a lot of people don’t swim at the beaches because “the currents are too dangerous” (I have my doubts whether I believe it or people just can’t swim), so surely something similar to the Copenhagen beach would be perfect. I’d like one within an MRT ride from Taipei, please

Before and after pictures (surprisingly, I couldn’t find any before & after pairs, so I found a before and used google maps to get the angle about right for the after)

Description (in Danish) of the process of building the beach. 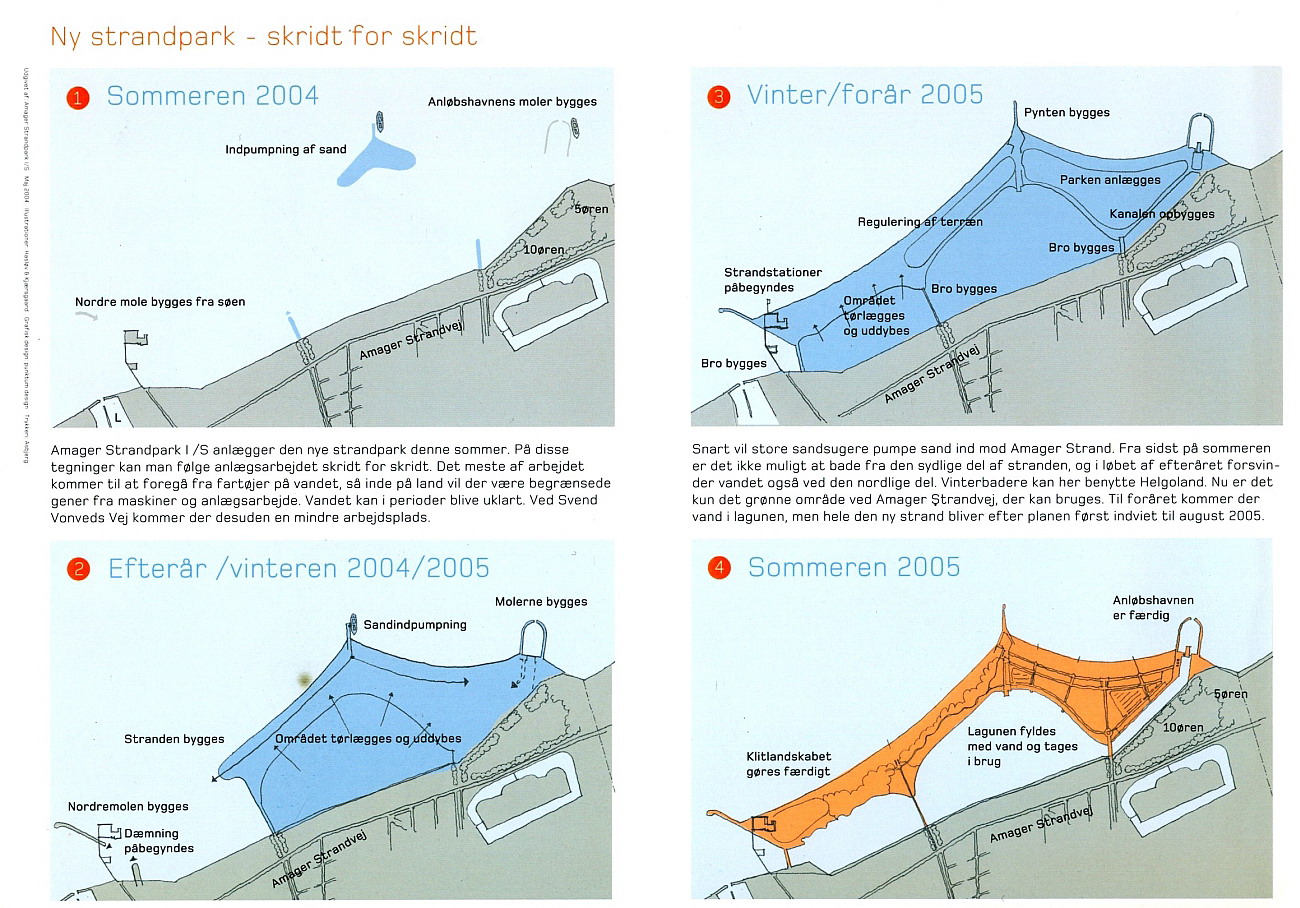 Taiwan used to have long stretches of beaches, but poorly placed man made concrete fishing harbors built in the 60s and the 70s all over the island created an erosion effect, and the sand that was supposed to go to the beaches ends up filling up the harbors, rendering them unusable, and the beaches just disappeared. To combat erosion, the government then had to throw thousands of concrete anti-erosion blocks, commonly referred to as Zhong-zi by the Taiwanese, into the water.

In fact, in the past 30 years, 12 beaches around Taiwan have disappeared. The situation can only be reversed by tearing down those protruding concrete piers. As long as they exist, any efforts to create artificial beaches would just be a waste of money.

Fulong is a good example of this. Fulong is currently an artificial beach, it wasn’t always so, but thanks to the brainless port placement and design near by, Jilong city now has to throw 3million NTD annually to hull in sand to maintain it’s “beachy” appearance.

Taiwan’s coastline, at least back in the 60s was still full of beaches, sand dunes, and coastal forests. They helped reduce coastline erosion, and flooding. Now the coastline has no sand, filled with concrete blocks, the vote buying harbors are filled with sand and unusable, sea life decreased dramatically not just due to over fishing and pollution, but also the destruction of the coastal environment.

So Taiwan did have beaches at one time and the locals just destroyed them? I thought it was just a function of the geography of the Island.

I think the coastal tragedy was also shown very eloquently in Taiwan from Above.

It is such a pity. I am no big fan of beaches myself, even though I lived within one to two hours drive to the Best Beaches in the World. But to destroy nature in such a savage and perment way is such a collosal act of cruelty, a mistake that is repaid in karma aplenty.

The weather and ocean don’t cooperate enough to make it viable as a beach. The East coast is too deep and West coast it’s too dirty. Typhoons and bad weather will destroy most anything that isn’t developed. Reclaimed lands for construction makes more sense in Taiwan.

Taiwanese hate the beach anyway so waste of tax dollars.

wow thats sad. add beaches to the list of things environmental problems that should be improved, but probably wont.

I think the coastal tragedy was also shown very eloquently in Taiwan from Above.

This thread also made me think of that movie. It was very well done and eye-opening.

Taichung and Miaoli are still destroying their remaining beaches. Look up tongxiao beach for the gory details.

The whole stretch of coastline there was named as ‘heavenly bay’ or something like that by the aboriginals.
To visit it know and to even know of the continual destruction including construction of another unnecessary highway along much of the west coast (while the existing parts of the ‘highway’ have massive holes in it) is to understand how deep taiwane enviromental problems are.

The power station has been extended right up to where the locals had their beach resort and its still being expanded. Taipower doesn’t need any permission from local governments to do this. As compensation they pay a couple of million NTD a year and I think they sponsored a swimming pool. Locals don’t seem to have kicked up much fuss but I’m sure plenty are pisssd off now they see the mega size the power station has become!

Got back from the homeland recently, something we did right is not concreting everything. The Japanese, Taiwanese, Chinese and Koreans don’t know what they used to have at this stage.

As another aside, Dublin city has a beach island called bull island that was formed from a similar process and is a very popular place for walks, birdwatching and even swimming on the odd hot days in the summer.mi think it was created by accident hundreds of years ago by building a Harbour wall.

The only artificial beach in Taiwan I can think of is at Dongshi in Chiayi County, by what Google Maps calls “East Stone Fisherman’s Wharf.” The sand was imported from Vietnam.