Why is this not news? This is terrible! Looks like they never learned from the first time they demolished possibly ancient cultural treasures. And they lose their mind when artefacts get loaned to Japan… What’s wrong with them?

Why is this not news? This is terrible! Looks like they never learned from the first time they demolished ancient cultural treasures. And they lose their mind when artefacts get loaned to Japan… What’s wrong with them?

Me thinks it all starts with Xi

FWIW it wasn’t ancient; it was only finished about two years ago.

Seriously, why is it not being reported by major news outlets? This is some Taliban level shit.

Thou shalt place no other gods before Winnie the Pooh.

This is on a level with knocking down a Jesus billboard.

yeah, but, if they’d left it alone for 500 years, it would then be ancient.

Wonder if Xi is going to go all General Zod on the empty canvas?

Seriously, though, it is at best an act of vandalism. Somebody somewhere put a lot of time and money into building a basically harmless monument, and here come a bunch of government Vogons to turn it into rubble.

How can we stand by and watch this destruction

How can we stand by and watch this destruction

We could just drink beer and observe

Some people just enjoy wrecking things. Being unable to create anything good, they get their revenge on reality by destroying.

Marxism is an excuse to wreck things. Hence the extreme emphasis on conflict. After class conflict fizzled, they went on to identity politics - but conflict is the constant.

Socialism is this plus the delusion that they can build better things after they’ve wrecked what was there before - of people who have never successfully built anything of worth.

Envy-induced vandalism is the soul of the leftist impulse. The theory all exists only to rationalize and excuse this.

As I recall, one of our other venerable posters put it thusly:

“Some people are just assholes.”

If you understand how things work, you’ll see the difference. 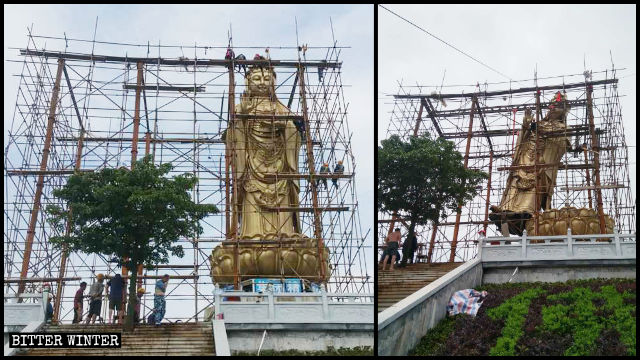 All Outdoor Buddhist Statues Must Go, No Matter the Cost

Regarded by the CCP as its fiercest enemies, the statues of Buddhist deities are being demolished across China under orders from the central government.

And it keeps coming. They keep tearing down the coolest things about China. They never learn. Do they?

Consistent with a state of fear bordering on panic.

Let’s say they are being fair as they are an atheist state and are demolishing mosques and prayer towers in Uighur territories, and persecute Christians and Catholics who I do not put the Great Leader’s Winnie the Pooh portrait next to Jesus or the Cross, so in all fairness they are also removing all Buddhist references.

They’ve been blowing up the mosques and churches all over China too by many accounts. Taking on the Buddhists like this will not be a good move I’d say.

There’s a lot of other bad shit.

Kashmir just turned into an uber police state for one. There’s Not even a thread about it on here.

Kashmir just turned into an uber police state for one. There’s Not even a thread about it on here.

Just saw that in the news and thought, “Oh, shit. Things are going to get ugly.” Remember the Red Guards Before You Cheer the Woke Mobs | The American...

I spoke with an elderly Chinese academic who had been forced from her classroom and made to sleep outside with the animals during the Revolution. She recalled forced self-criticism sessions that required her to guess at her crimes, as she’d done nothing more than teach literature, a kind of systematic revisionism in that it espoused beliefs her tormentors thought contributed to the rotten society. She also had to write out long apologies for being who she was. She was personally held responsible for 4,000 years of oppression of the masses. Our meeting was last year, before white guilt became a whole category on Netflix, but I wonder if she’d see now how similar it all is.

Oh wait…wrong thread, or maybe not…