Just heard a podcast interview with this chap, Joe Bageant, about his latest book, Deer Hunting with Jesus: Dispatches from America’s Class War, which appears to have way more going for it than just a very funky title. It might also have helped that he has one of the few American accents that sound remotely decent to my ear, Johnny Cash representing the other, just so’s youse know’s how limited that iyas. 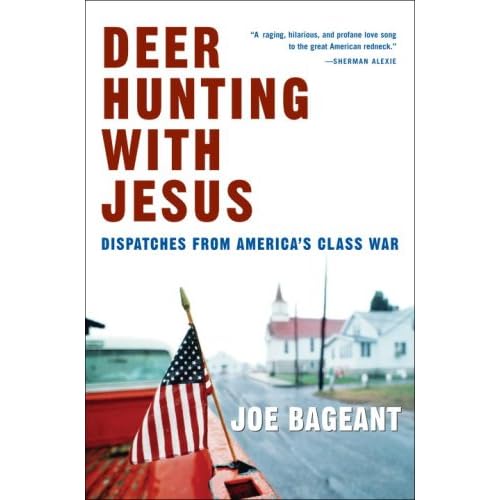 Here’s one of his web based essays. Frankly I find his ability to snub liberals and republicans while mocking AND lending dignity to America’s poor all rather refreshing.

It never ceases to amaze how American capitalism can sell even our own identities back to us in such tantalizing fashion as to make a profit. Nobody is exempt. As in “Liberal ladies, buy your wardrobe at Target and you too will be a slim sexy humanitarian like Susan Sarandon.” My eyeballs are in my lap every time that woman twists her stuff against that orange backdrop. My wife glowers from her armchair: “Buy me a quarter million dollar eye job, chin and butt tuck, and I’ll shake all the damned booty you want, Buster.” I’m seriously tempted by her offer.

Or we can gas up the car, drive to the suburban Cineplex and pay ten bucks to see Al Gore tell us to save energy by hanging your clothes outside on lines in An Inconvenient Truth, thereby striking a blow as an environmentalist. Never mind ole Al’s 10,000-square-foot, 20-room, eight-bathroom Nashville mansion and its $20,000 annual energy bill. Or his 4,000-square-foot home in Arlington, Virginia, or that rolls rural estate in Carthage, Tennessee. Al and Tipper remind us that, because it was the despicable (which it is) Hoover Institute which plastered that inconvenient truth across the pages of USA Today, the houses do not count. They may not count, but their images seem to have been yanked off the Internet.

Meanwhile the Dub and Laura have gone green too, and are unashamedly shopping for a gasoline powered windmill for the Crawford Ranch. “We’re doin’ our part,” the president waves from his custom Silverado HD 3500 long box truck with the matching green 6,700 pound hauling capacity and the matching air conditioned gooseneck trailer. It’s a “green” ranch, green being the official color of the Crawford spread. They say even the pistol shooting range in the basement has green carpet (no shit!)

But country music has got to be the supreme example. People work like dogs, have few or no educational opportunities, live surly lives of struggle just trying to get by, get their cods shot off for the amusement of Cheney and Condi, yet, the country music industry sells even that identity back to the very people who are being screwed and should be pissed as hell about it but aren’t because of the cultural ghetto we poor whites are raised in. As the old Johnny Russell song says, “There’s no place I’d rather be than right here, with my red neck and white socks and blue ribbon beer.” And so the nine-buck-an-hour skidder operator with the double hernia and no health insurance listens to the song and says to himself: "Hey! That’s my life! And he’s a star and he’s singing a hit about it, so other people must be satisfied with it. I reckon there’s no place I rather be than right here! That was true in 1973 when Johnny Russell won a Grammy for the song and it’s still true. It’s a damned good song. I’m still playing it.

The country music industry helped sell the heartland working mook on the virtues of dying in Iraq. The skidder operator’s wife sits inputting billing data at the local hospital for $6.00 an hour, listening to a song about dead soldier’s cherried out car sitting in the garage, waiting for his son to become old enough to drive it with reverence under a heroic sky. In country music everybody is made hero. Truck drivers are bigger than life figures, hemorrhoids, stress and all. It’s much the same as some rap music mythologizing pointless street violence. Take a truly fucked situation and sell it back as bigger than life. And so the production people at dreary workplaces listen to country music all day, and the truck driver is hearing the same songs 3,000 miles away, and the house painter has it playing on his paint spattered portable radio, and identity is further hardened among millions of Americans: “I might be dumb, uneducated, and worked to death – but I am a hero. I AM America. More American than anyone who is not the same as me.” So anyone who listens to classical music is less American by inference. " . . . and besides, I am willing to die in Iraq, just like the hometown boys in the songs. There is no better proof than that!"

Still, one increasingly hears more hopeful strains in country music. Singer Chely Wright, who has performed for US troops in Al Asad, Iraq, and whose background is poor enough and white enough to be one of my own family, and whose ancestors and kinfolk, like mine, have also fought in every American war, sings in “Bumper of my SUV”:

Only the deadest political ear could fail to hear class resentment in those lyrics. Growing up in the poor white working class leaves you angry for life, even after you’ve become successful. But the time is growing very ripe for liberals to wise up and come explain to my people just who it was that made them a growing permanent underclass. If we speak honestly, they will listen. But first we must unsell ourselves that our moral high ground and political awareness makes us superior.

Oh yes…the “Great American Class War”…LOL another loathsome creation foisted by those would create divisions and gloat rather than actually see a growth process in action.

A line you might take to heart…
“But first we must unsell ourselves that our moral high ground and political awareness makes us superior.”

Didn’t expect YOU to wade through it, TC, which clearly you haven’t. There’s no air of superiority in there, that’s the beauty of it. And as for the class war, he regards >60% of Americans as working class. It’s really not your usual analysis, and certainly worth more than your usual kneejerk.

Har har…I quoted the pithy part. Come down and be happy.

That Merle Haggard song confuses me, but I’ll spare ya, well, only after suggesting that there’s nothing ostensibly “politcally uncorrect” in any of the things he suggests might be.

It’s those prisms, man, they shift everything.

Well, the excerpt had its funny spots, but mostly it was rehash of things we know, mixed with faux shock that people are hypocritical and make unusual purchasing decisions. I don’t think I’ll buy the book and see what the “class war” is all about.

Class War?
Isn’t that more of a Brit/Commonwealth Issue?

Something’s going on in the minds of middle-class working folks and it’s going to make for some interesting results at the polls in 2008:

The Republican Party obviously has better things to do these days then look out for the welfare of the American people but it’s a measure of just how desperate the average person in the U.S. is feeling these days if they think the Democratic Party is going to treat them any better.

Where’s it all going to end up? Throw all the bums out, I say, and start over from scratch, system and all.

Well, the excerpt had its funny spots, but mostly it was rehash of things we know, mixed with faux shock that people are hypocritical and make unusual purchasing decisions. I don’t think I’ll buy the book and see what the “class war” is all about.

No need to buy the book. He’s got plenty of essays online at his good Website:
joebageant.com/joe/

I think it’s pretty funny stuff. Obviously he’s a big fan of Hunter S. Thomson and has adopted a similar manic style not just in his writing but in his life. Here’s a bio he wrote about himself:

After stint in Navy became anti-war hippie, ran off to the West Coast … lived in communes, hippie school buses… started writing about holy men, countercultural figures, rock stars and the American scene in 1971 … lived in Boulder Colorado until mid 1980s … 14 years in all … became a Marxist and a half-assed Buddhist … Traveled to Central America to write about third World issues…

Moved to the Coeur d’Alene Indian reservation in Idaho, built a cabin, lived without electricity, farmed with horses for seven years … tended reservation bar (The Bald Eagle Bar), wrote for regional newspapers… generally festered on life in America … Moved to Moscow, Idaho, worked on third rate newspaper there … Then moved to Eugene Oregon, worked for an international magazine corporation pushing insecticides and pesticides to farmers worldwide.

Then back to hometown of Winchester VA to settle some scores with the bigoted, murderous redneck town I grew up in. I love’em but they need a good ass kicking.

Died in 2000 when George Bush got elected … died along with 275 million other Americans … Plan to rise again from the dead when he is tossed out …maybe reincarnate as a Commie terrorist on Wall Street … maybe as a sex worker in Amsterdam … can’t decide … both have their advantages.[/quote]

I agree, it is funny, although that essay I posted wasn’t the best of what’s on offer, it is rather nuanced. Frankly I find his perspective very refreshing coming out of America where the usual political debate just seems so damned tiresome. He doesn’t put shit on working class culture, thinks religion is alright, but is critical of the working lot of most Americans.

It has always astounded me how much America’s poor are willing to put up with and how few genuine voices there are in their defence.

Here’s a link to the podcast interview.

[quote]Deer Hunting With Jesus: Dispatches from America’s Class War
Joe Bageant grew up in Winchester, Virginia a place he desribes as “solidly fundamentalist Christian and neoconservative, steeped in the gloomy ultra-Protestant assumption that man is an evil, worthless thing from birth and goes downhill from there.”

After 30 years living elsewhere, Joe found himself back in his home town, writing about the poor and working poor folks he grew up with.[/quote]

[quote=“spook”]Something’s going on in the minds of middle-class working folks and it’s going to make for some interesting results at the polls in 2008:

The Republican Party obviously has better things to do these days then look out for the welfare of the American people but it’s a measure of just how desperate the average person in the U.S. is feeling these days if they think the Democratic Party is going to treat them any better.

Where’s it all going to end up? Throw all the bums out, I say, and start over from scratch, system and all.[/quote]

How do you actually say “2000s”? 1980s I have no problem with, but the current decade screws around with my tongue.

Somebody proposed “the Naughties.” (get it? “naught”?)

Interestingly, we all say “two thousand and seven” instead of “twenty oh seven” or some such. But 2048 will be “twenty forty-eight.” At what point do we plan to switch? Heh, maybe this is the new Y2K problem!