Discussion about COVID restrictions and lockdowns in Taiwan

(Mods, maybe this should be folded into the general COVID in Taiwan chat thread; I’m not sure if it merits its own thread, but I feel like it does.)

Note the thread for actually announcing and explaining the rules is elsewhere; I’m starting this one more for discussion.

How are people feeling about the current level of restrictions and lockdowns? I’m still vaguely of the sense that Level 3 is about right: I’m not convinced the extra hardships of Level 4 would make much of a difference, and we’d still be stuck with the same number of cases spreading within families and worker dormitories. I also suspect that for Level 4 to be effective there’d need to be much more testing than the government appears willing to do.

BUT then I read that apparently train tickets to Kaohsiung for the Dragon Boat Festival weekend are sold out. (@DrewC, that’ll make you happy!) So … I dunno about a full Level 4, but crap, doing a hell of a lot to discourage holiday weekend visits to the family would be a great idea.

Angelica Oung argues in favor of a fuller lockdown:

Lock it down, now

Taiwan is repeating the world’s COVID mistakes, and time is running out

And she also (re?-)tweets a meme about killing the family for Dragon Boat Festival:

Meme trying to get ppl to stay home: meet to celebrate the ancestors this year? Everybody gets to be ancestors next year. https://t.co/NXY1zLNxcQ 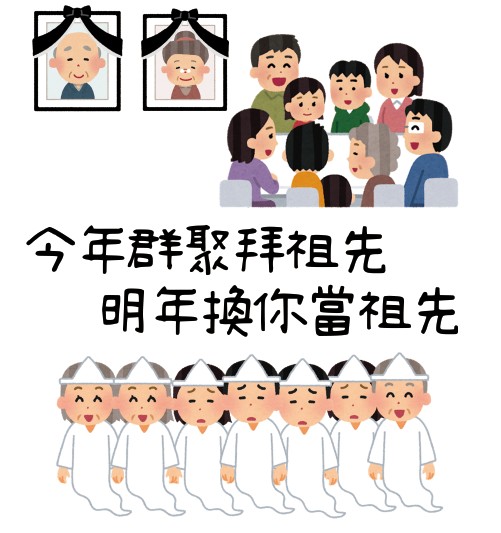 I read that apparently train tickets to Kaohsiung for the Dragon Boat Festival weekend are sold out.

Only 59 tickets are sold, iiic.

Only 59 tickets are sold, iiic.

Oh, that’s great! I was going by Oung’s article above, which includes this image for sold out trains on the 11th:

Angelica Oung argues in favor of a fuller lockdown:

As has been cited elsewhere here and through a quick skim through booking systems for both the TRA and HSR show that…as of a few moments ago, nothing is sold out.

I sort of expect bloggers and Twitter people and folks who hang out the entire day on social media to think a level 99 lockdown would be fine because it wouldn’t impact their daily lives but you can’t simply shutting an entire country and expect things to recover.

Even if you could close things down, you have to at least walk through your rationale how locking down Taiwan would have different results than lockdowns in…every other country in the world. I believe the current number is that ~43% of all recent cases have come from inside the same household and how many people here can smell it if their neighbors decide to smoke?

So … I dunno about a full Level 4, but crap, doing a hell of a lot to discourage holiday weekend visits to the family would be a great idea.

That’s reasonable. However, are we worried about spread on the trains or spread from the north to the south? If the latter, do we stop individuals from driving down as well?

I believe the current number is that ~43% of all recent cases have come from inside the same household and how many people here can smell it if their neighbors decide to smoke?

Yes, I don’t know about the numbers, but that’s my main reason for generally feeling Level 4 wouldn’t help matters all that much anyway. Making everyone stay home won’t do much when the call virus is coming from inside the house.

However, are we worried about spread on the trains or spread from the north to the south? If the latter, do we stop individuals from driving down as well?

For me it’s much more about people giving it to grandma and grandpa at home. Somewhere I saw data on how New York subway trains have a high enough air exchange rate that the virus risk is actually quite low - but who knows if the same would apply for Taiwan trains.

In general, I’m against stopping people. That’s a step I’m very uncomfortable taking. But publicizing how they shouldn’t travel is great. There’s some of this going on, but my general obliviousness to TV here makes it impossible for me to judge how much there is:

During the upcoming long-weekend holiday, the High Speed Rail still has some peak population movement on the first day and last day of the vacation, according to ticket sales so the CECC is urging people to stay put at where they are and prevent long-distance traveling.
1 Like
Terry_B June 6, 2021, 8:49am #7

For me it’s much more about people giving it to grandma and grandpa at home.

However, tell me if I’m callous if I don’t really care. I think that people who are at higher risk should be protected though if people don’t care enough about their relatives to shelter them for a few months, should we shut down the livelihoods of millions of people and destroy the economy of an entire country, especially as people who make such decisions probably will do what they want, regardless of gov’t lockdown level.

but who knows if the same would apply for Taiwan trains.

No idea. I’ve taken the MRT a few times and feel that the risk of riding it is less than the risk of going to the supermarket.

In general, I’m against stopping people. That’s a step I’m very uncomfortable taking. But publicizing how they shouldn’t travel is great.

You and I are entirely on the same page here.

The problem with lockdowns that many have observed is that if you don’t lock things down 100%, systems fail and, unless you’re China willing to weld people in their homes without food, no lockdown is going to be tight enough to be effective.

no lockdown is going to be tight enough to be effective.

There’s probably data out there comparing Taiwan’s current outbreak with the ones that were effectively choked off in Australia and … anywhere else? I don’t think New Zealand’s ever spread as much. I believe South Korea has kept things mostly manageable, but with a constant whack-a-mole approach rather than getting to Covid-Zero. If anyone has information about a country that HAS successfully got back to Covid-Zero after as much spread as there’s already been in Taiwan, I’d like to know about it. But if no one has, and Level 3 vs Level 4 both mean a constant flow of cases but no massive surge, then there doesn’t seem much point in Level 4.

Never mind the side point of loosening some things about Level 3 (closed hiking trails?!) and tightening others (bosses not letting people work from home in situations when it’d be totally feasible).

A Twitter thread rebutting the article I cited back in the first post: mainly saying Level 4 seems unjustified, although the government needs to get on top of things like testing and stop dumb policies like spraying and parks closures.

There's a pro-lockdown opinion piece doing the rounds right now. It repeats many of the bad arguments common to the genre e.g. TW should have been doing "mass testing". Just think about how many people you'd need to test (and how often) to catch a handful of cases in 23 million. twitter.com/spectralcodex/…

@samsonellis @ChasonDailey "The surge from zero to quadruple digits signals that undetected spread has been occurring for months"? There's no evidence for this. In fact, it's flat-out wrong given the genomic sequencing performed thus far, which links all new cases back to the Novotel cluster.
3 Likes
Baobab June 6, 2021, 11:31pm #10

I’m not a proponent of a lockdown but this guy’s tweets are dubious.

One of his points is that we don’t have a high prevalence of COVID so therefore lockdowns aren’t needed, but he also admits that TW needs to ramp up testing.

But there's another reason this is wrong: the relative incidence of #COVID19 in pre-Thanksgiving America was many times that of present-day Taiwan (like 25x). There were *way* more opportunities for the virus to spread to family and through travel. Chart via @OurWorldInData 📈 https://t.co/P6Ihqtatag 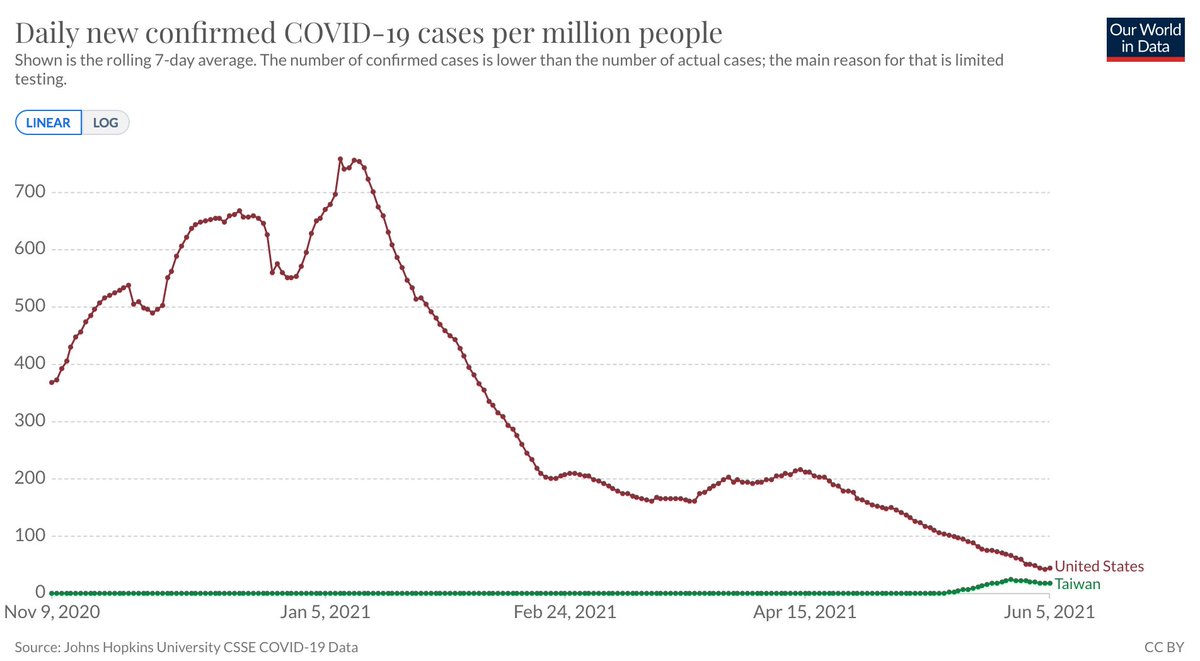 How do you know what the actual prevalence is if you don’t have adequate testing? Not saying it’s 20,000 cases/day, but if you think the 300-500 new cases reported every day like clockwork represent the real number of cases out there, I’ve got a bridge to sell you.

There's plenty of reasons to think a full lockdown wouldn't quickly eliminate transmission in Taiwan anyhow. There are too many undocumented workers, too much informal economic activity, too many people who simply don't have the option to #StayHome for weeks on end.

Also love how the first thing on this list here is “undocumented workers”. Really, bro?

For ‘testing’, I think that he was arguing that mass testing over the past 17 months to root out hidden, asymptomatic cases would have been a waste of resources. The current spread appears to have come from the Novatel pilots, Wanhua tea houses and the Lion King & friends connecting a few dots, not from hidden infections lurking beneath the surface.

I think you can argue this while wanting current testing levels to be increased.

I don’t agree with every word of his thread but agree with it far more than the hyper-emotional, fact-free blog post that he was responding to.

Edit - this was in response to post directly above it.

This guy is as annoying as Brian Ho, Keoni, and Tricky Taipei put together.

Last week he was blaming people getting a Covid travel test as taking away vital capacity. That may be the case, but the question should be why doesn’t Taiwan have the capacity in the first place.

The public park closures really are baffling to me, I really don’t see much transmission risk of a few sets of dips, chin ups etc in open air with some common sense. 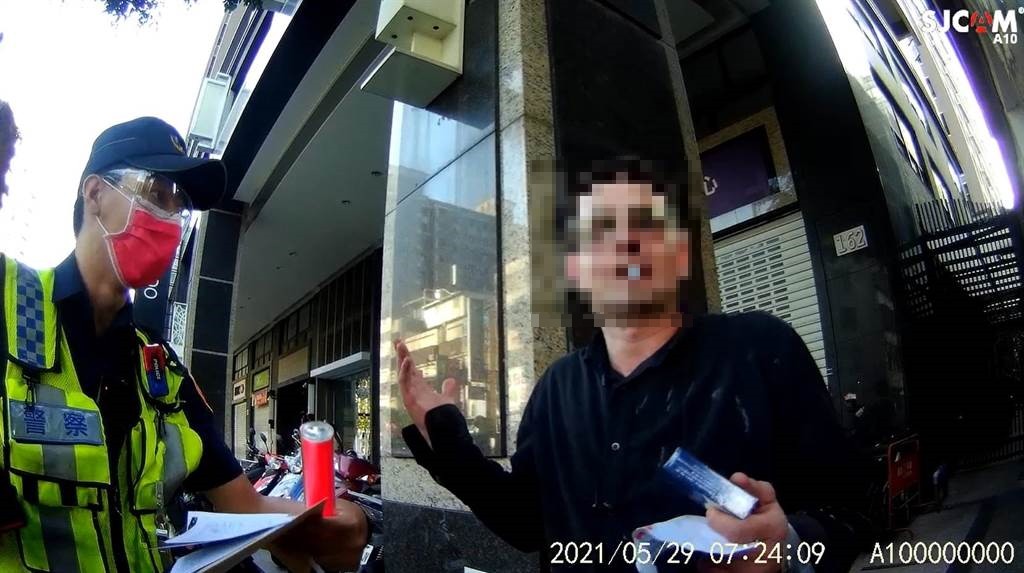 I’m still vaguely of the sense that Level 3 is about right: I’m not convinced the extra hardships of Level 4 would make much of a difference,

I feel we’re slowly transitioning into level 4 with the new restrictions about buying groceries only 3 or 4 days a week. Only difference seems that offices and certain businesses stay open.

So the tenor of the policy makers seems to place restrictions mostly on the private life of people while trying to keep restrictions affecting businesses to a minimum.

At 5 a.m. on May 29, he wandered outside to smoke and was asked to wear a mask by a police officer from Taichung’s Wenchang Police Station in Beitun District, but he refused, claiming it made it difficult to breathe . . .

Phuck him. He’s a public menace. 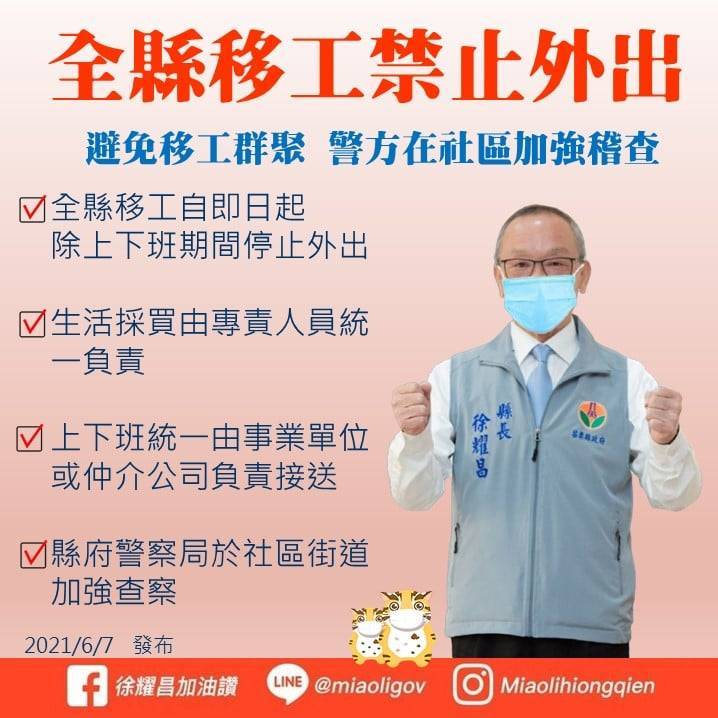 imo, this is a human rights violation.

imo, this is a human rights violation.

It’s really sad how fast Taiwan has turned from “Taiwan can help and the world can learn from Taiwan how to successfully prevent COVID spread” to “Our strategy for fighting COVID is locking in migrant workers, so businesses can keep operating as long as possible”

And am I the only one that thinks that the mask on the image is a badly done photoshop…?

“Our strategy for fighting COVID is locking in migrant workers, so businesses can keep operating as long as possible”

Taipei, June 8 (CNA) Taoyuan Mayor Cheng Wen-tsan (鄭文燦) on Tuesday went back on an earlier decision to shut down beauty salons in the city, deciding to allow them to resume operations immediately as long as they follow the city's COVID-19 guidelines.

And what is this non-sense:

“ Transfers will only be allowed under circumstances deemed necessary. These include migrant workers being targeted by violence or sexual abuse in the workplace or involvement in human trafficking, said Wang.”

So if someone has been abused, just transfer them out? Why not investigate, crack down on such crime, make those abusers pay and have innocent migrant worker continue?