We’re moving from New Zealand to Taiwan in a few months. Will I be able to charge my Apple products (MacBook, iPhone) and other electronics (hairdryer) in Taiwan provided I use an adaptor? I hear Taiwan has a different voltage but not sure if a travel adaptor will solve the problem?

Depends. If they have an AC adapter, then most likely yes.

The Apple adapters and most AC adapters support changing the AC cable too.

Look at the area that says input. Ignore the red. I got this off Google. If it says something similar to 100-240 V then it is plug in compatible.

Apple devices for sure can.

Surprisingly, the Nintendo DS and Wii do not.

Take this as a guide, but please check your devices labels.

Usually a sticker somewhere on the device or adapter will say the input voltage. You are looking for universal devices accepting 100 - 240v. Or devices with a physical 230 / 110v switch.

Laptops, phone chargers and other power bricks within the last 10 years are almost always 100-240v input, so yes.

Exceptions that I know of are some game consoles (Xbox 360 at least) so check any you are planning to bring.

Another exception to the charger rule is most oral b toothbrush chargers are not universal voltage.

Desktop computers, modern ones are auto switching, older ones have a switch near the power input to toggle between 110v and 240v.

Hair dryers, curling irons etc. most won’t work unless they are travel versions with a voltage switch, really anything with a heating element probably won’t work, including most laser printers and kitchen appliances.

Taiwan does have 220v sockets but they are rare and in inconvenient locations (high on the wall) as they are designed for air conditioners that need 220v. Note: it’s not really recommended to use them for other items and you would need the proper adapter to adapt the plug on such socket.

I am from NZ so I have been through this when I moved to Taiwan.

Remember to bring some NZ 4 way power strips if you are bringing a bunch of chargers. That way you can use 1 adapter for the power strip and plug multiple NZ devices into the strip.

Luckily coming from 240v to 110v you will most likely find the device doesn’t work as the voltage is too low. Going the other way 110v to 240v results in the magic smoke coming out sometimes with a loud bang.

Taiwan does have 220v sockets but they are rare and in inconvenient locations (high on the wall) as they are designed for air conditioners that need 220v. Note: it’s not really recommended to use them for other items and you would need the proper adapter to adapt the plug on such socket.

If you have 3 phase then it could be that, but actually no, I have no idea what each of the legs are as L1 and L3 reads around 135v when measured against ground, and L2 measures about 194v against ground. The system is technically 220v 3 phase, and you actually need a transformer to get 110v out of a 3 phase. They are usually hidden above the ceiling or whatever. Connecting any of the 3 phases together gives you about 230v.

For single phase it would be L1 and L2 that gives you approximately 245-250v.

In my house I have the 3x 110V that give 220V when two phases are connected.
My post was also meant as a caveat to not just put the three wires on an imported socket and plug an x-box in.
I would also recommend to use a transformer to run anything that needs 220V before doing anything DIY. The house’s wiring can be pretty shoddy here and I’ve seen some stuff that makes me wonder why not more houses get immolated by cable fires.

All Apple devices are worldwide AC compatible. Forget about all the detail above. You buy plug adaptors and you is good to go.

I’ve been back and forth from NZ to Taiwan many times.

Then you likely have a 3 phase supply. You know this by looking at the breaker panel. If you see 3 wires coming in the supply side to the main breaker, it’s 3 phase. You should also have a transformer somewhere near the breaker panel. It’s a huge green box.

Yep. Said panel is also wired and installed quite adventurously.

Taiwan is split phase like the U.S. It isn’t technically three phase power.

The plugs are L1, L2 and N, generally there isn’t an earth due to only having 3 pins.

Technology Connections explains the US system which it is based off very well: 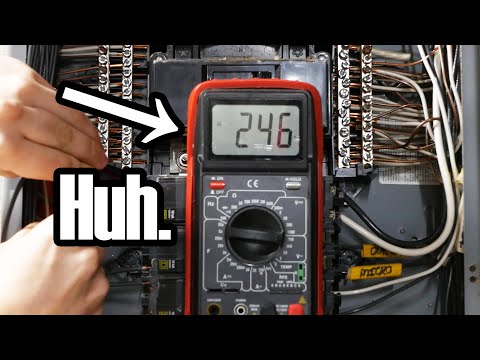 That’s if you have a single phase supply.

Three phase in Taiwan is done differently than the US. In the US each phase is 110v and you connect any of the two to get 208v. In Taiwan the 3 phase must be a different configuration because you can’t get 110 off of a single phase to neutral in a 3 phase supply, you must have a transformer to get 110.

Taiwan is done differently than the US. In the US each phase is 110v and you connect any of the

Three phase in Taiwan is done differently than the US. In the US each phase is 110v and you connect any of the two to get 208v.

Perhaps it depends on when / how the house was built. From what I have seen air conditioners here are either rated at 110v and can be plugged into a normal outlet or 220v. I am not sure if they generate it in the same way, but it is still 220v as that is what the air conditioners are rated for.

I measured the air conditioner plug in the office and got the results as the video above and basically modified an adapter to fit (I don’t suggest anyone try that). The printer works fine connected to it.

Fact is the device does not know if it got its 220v from live to neutral or two live connections to equal 220 volt. It sees 220, and it will work.

I brought back appliance from Germany and it works fine off of 220v in Taiwan.

Forget about all the detail above. You buy plug adaptors and you is good to go.

Pro tip: Don’t buy clunky adapters, but change out the plugs / cables. The apple adapters work fine with the “two plug” cables which one can buy for less than NT$ 30 usually (I bought mine for NT$ 9 at Shopee). Otherwise, the plug can be changed for some adapters:

Same with my ThinkPad (bought in Europe): Just get the right cable and you’re good to go!

(Actually, the “mickey mouse” to two-plug was a bit more difficult to find because it’s non-standard. More common is the one to three-plugs, but those don’t work in the sockets with two plugs which are still quite common here unfortunately).

Yep, voltage is potential difference. I remember learning that a long time ago from hooking up computer fans between the 5v and the 12v pin on the PSU to have them run at 8v so they were not too noisy but would still start.

Due to new Apple machines only coming with a adapter making it more of a wall wart, it wouldn’t fit in my desk at work, had to use one of those two pin cables like in your picture. I don’t really like it though as it has no earth and if your fingers are damp from a cold drink, I feel electricity feeling on the metal case. I know there is a reason for that and it happened with the metal frame of my iPhone 4 as well. Having an earth connection prevents that though.