Kaohsiung has a new flamboyant mayor with some big plans to make the city great again.

What do we know about his election campaign promises and what are the chances he can fulfill on them?

Meanwhile in Hong Kong
Positive or at Least Objective English news about Korean Fish
Taiwan's 2020 Presidential Election - will the "beauty card" be a decisive factor?
hansioux December 4, 2018, 7:07am #2

Korean Fish? The dude is a charismatic know-nothing. Kinda like Trump, he’s a personality over policy type with very little actual substantive details behind his grandiose plans. He won because the other guy was an unexciting, effeminate pencil-pusher type with zero charisma (kinda like a male Hillary). My wife and I are curious about that weird Ferris wheel love hotel he’s planning to blight the harbor with (basically you ride and screw).

Anyway, nothing will change. Except maybe for the worse. If wages actually rise and break out of their decade long stagnation, I’ll be shocked.

The Chinese are coming, on many levels!

My wife and I are curious about that weird Ferris wheel love hotel he’s planning to blight the harbor with (basically you ride and screw).

Maybe that’s the plan to bring the population up to the 5 million mark as he promised.

My wife and I are curious about that weird Ferris wheel love hotel he’s planning to blight the harbor with (basically you ride and screw).

OK, I’m starting to warm up to this Korean Fish guy…

So much Chinese money paying for all these slots about Han Guo Yu on the networks…Since when did they even report on stuff in Kaohsiung, now he’s often be talked about on multiple channels at the same time !

The mainstream media in Taiwan is a joke, breathlessly following this guy around as he visits temples, etc. Since when do they care about Kaoshiung? Not one bit since I moved here in the early 2000s!

He was on TVBS for hours every evening for the weeks running up to the election, and pretty often afterwards as well. I still have little idea as to what he stands for. 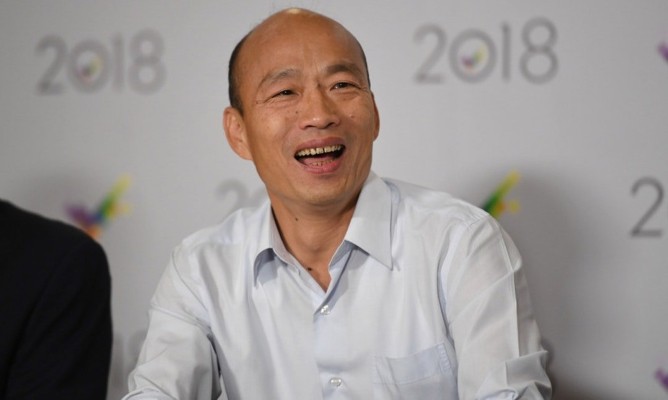 [When asked by reporters why he selected Lin as head of the Kaohsiung City Government’s Indigenous Affairs Commission, Han said he was not aware of Lin’s personal information, but he was enthusiastic about his efforts to help Taiwan’s indigenous people. Han then said, “If he has been punished by the law, it’s OK to get a fresh start,”]

The guy is old school trash. Parties aside, he is what I’m used to in local pingdong.

What does he stand for? Sex motel style ferris wheels. No joke. What a putz. Kaohsiung, you just proved you are one and the same as small town pingdong as far as education, and like 35 year old men as far as far sightedness in terms of economics… Right after winning he has stated he will bow down and welcome China. Not sure why people are so dumb to think becoming #0 with China is good for the economy. Retardation at its finest. Kaohsiung, Gongxi…laziness over freedom.

Sure smells bad, one of his big supporters is a gangster type in Yunlin.

35 year old men are not farsighted when it comes to economics ? Because?

Han Guo Yu is 60+ by the way, as is Tsai YIng Wen, Ke Wen Zhe and almost all the top pols here.

I’m no fan of this guy, but I’m confused by the reference to a “35 year old”? Wouldn’t that be on the fairly young side to be involved in politics? Kind of a weird thing to say if your point is he’s out of touch. Also, you’re off by 2 or 3 decades on his age.

Lol everyone over 35 is offended.

The guy is old school trash.

Lol everyone over 35 is offended.

No. Everyone over 35 is confused. Because 35 is very young to be an office holder. You can’t even legally run for the US Presidency until you’re 35. So it’s weird to use that relatively young age as a marker for being out of touch.

Also, reminder: One day you’ll be over 35. And hopefully more mature and less angry.

Hehe maybe a bad example. I was meaning that people.becoming stable in Their carriers tend to go “economic route”, but they are too young (or dumb?) to get it. Selling out to China is short term gain, long term pain.

Anyone involved with Taiwan industry saw this after Mayingjou screwed Taiwan and made us dependant on China. Now entire industries are.collapsing due to usa/China trade tensions, and these people aren’t making the connection. Wood industry example being a prime one for environment. Now deforestation is happening all over Taiwan for half the price cause there is virtually no market outside China. China factories are closing, moving to Vietnam and.Cambodia,
Meanwhile people here are fuggered. They blame dpp, but this is 1100% Ma’s problem. Kaohsiung douchbag is far worse than Ma, luckily he is stuck as mayor down south because even his.own.party thought him an unworthy piece of shit…luckily for them dpp has been all but useless and people don’t like that. There was no real third candidate in ktown so instead of useless they voted in evil.

So ya, 35 year old…bad example…seems the whole spectrum of age suffers the same amnesia and/or ignorance.

Ps. I am not a dpp supporter