has anyone been to this place in Keelung?

It’s a famous “ghost house”…I wanna go there when the ghost month is over.

rather amused by this interpretation: 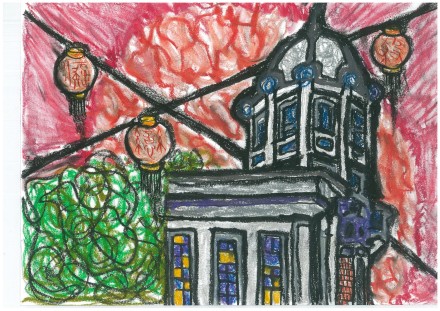 The Haunted Bar in KeeLung

This is the haunted house in Keelung, which is a harbor in East Asia where many American soldiers came for recreations during the Vietnam War. The building is colonially styled, designed as a bar f…

What sort of spirits do they have?

I see what you did there…

Surely it defeats the object going AFTER ghost month?

That’s an amazing building. It would make a great bar. Is it derelict and abandoned? Any idea if it’s up for sale?

ThIs is a beautiful derelict building right on the Harbour front area in Keelung. IM guessing it’s a listed building though.

It is partially blocked from view by the monstrosity of an overpass that runs past the Harbour area.

According to local people, no one would wanna be around that place because it will bring bad luck.

So, according to the article link, a girl that worked in the bar was pregnant with a guys baby and burned the place up with people inside drinking and dancing and they all died?

I had to read you for noticing that xD

Built in 1931 by mining tycoon Lîm Khai-kûn (林開群), the place was then rented to famous artist Gê Tsióng-huâi (倪蔣懷), often referred to as the first western styled Taiwanese artist.

Ge moved out after three years, leaving the place vacant until the war ended. Lim then rented the place out to become a bar (美琪酒吧).

The rest unfortunately (or maybe fortunately) are all fake. Sorry if that ruins the building for you, but it’s still worth visiting I think.

There was a fire that killed American soldiers back in the day, but it took place at Taipei’s Hotel New Taipei (新台北大飯店, present day No. 1 Songjiang rd. Lane 39) back in July 4 1966.

The fire killed 6 and injured 3. 2 were American soldiers, 2 were girls they spent a night with, 1 was an American businessman, and 1 Japanese businessman. The fire was started by an American solider staying on the 6th floor smoking in bed then dozing off. That GI was only slightly charred.

1 GI staying on the 7th floor threw the girl he stayed with down to balconies below them, then jumped behind her to repeat the process. They made it to the 4th floor, meaning that GI threw an adult into a balcony below them 3 times, then jumped himself 3 times. Pretty brave and amazing. Too bad he got tired and missed from the 4th to the 3rd floor as they both leaped to their death… Even more tragic, fire didn’t spread to the 4th floor, so they could have just walked down the stairs at they point. If anyone deserves a ghost story, that couple did. I would love to go! Only if you are a sensitive! Haha

Yep. That is why it has been haunted.