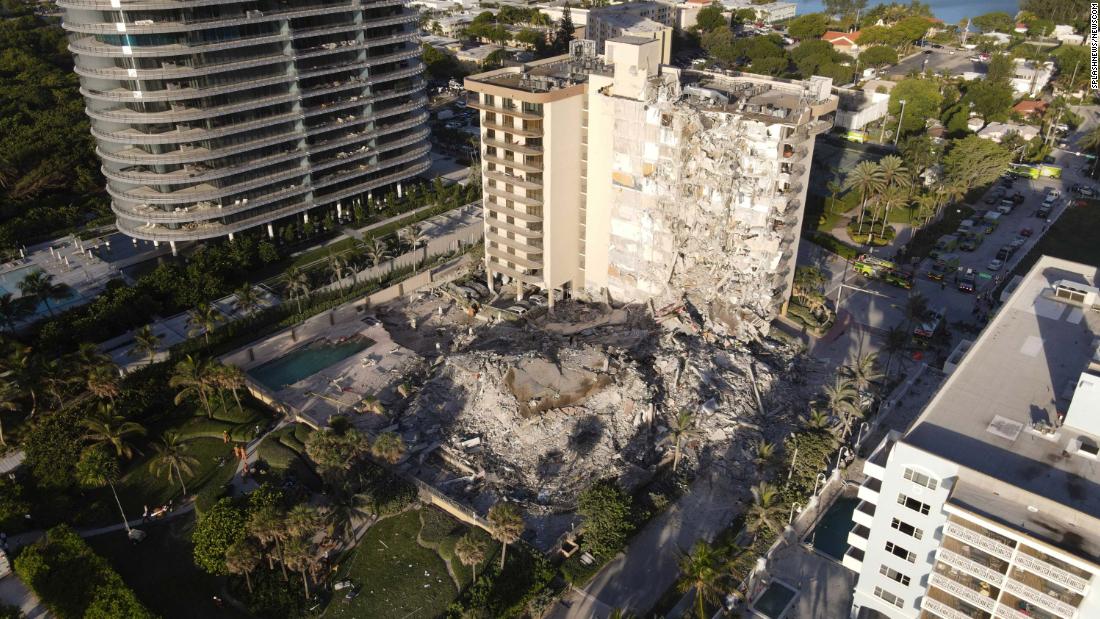 Search continues with almost 100 people unaccounted for in deadly Florida...

An intense search and rescue effort will continue through the night after part of a 12-story residential building collapsed early Thursday in the South Florida town of Surfside, killing at least one and leaving almost 100 people unaccounted for.

Wow, that’s like 2/3 of the building according to this side by side 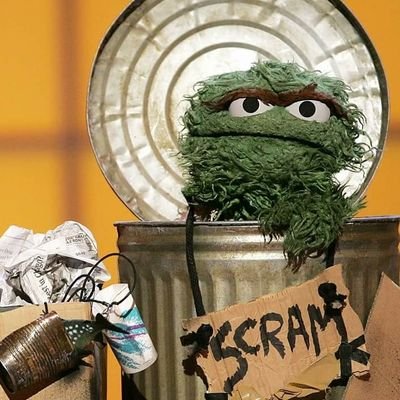 @tonypascarella
For some perspective on the Miami Beach building collapse, everything to the left of the red line is gone. https://t.co/NaXXYm9jfO 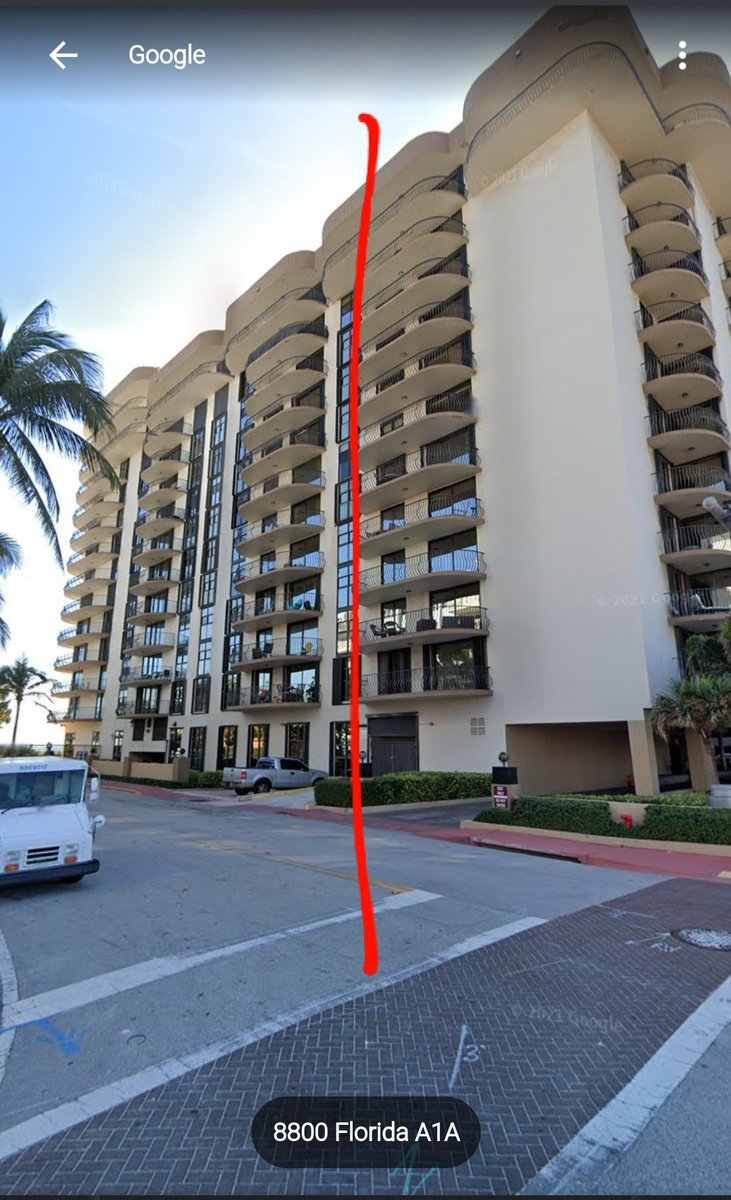 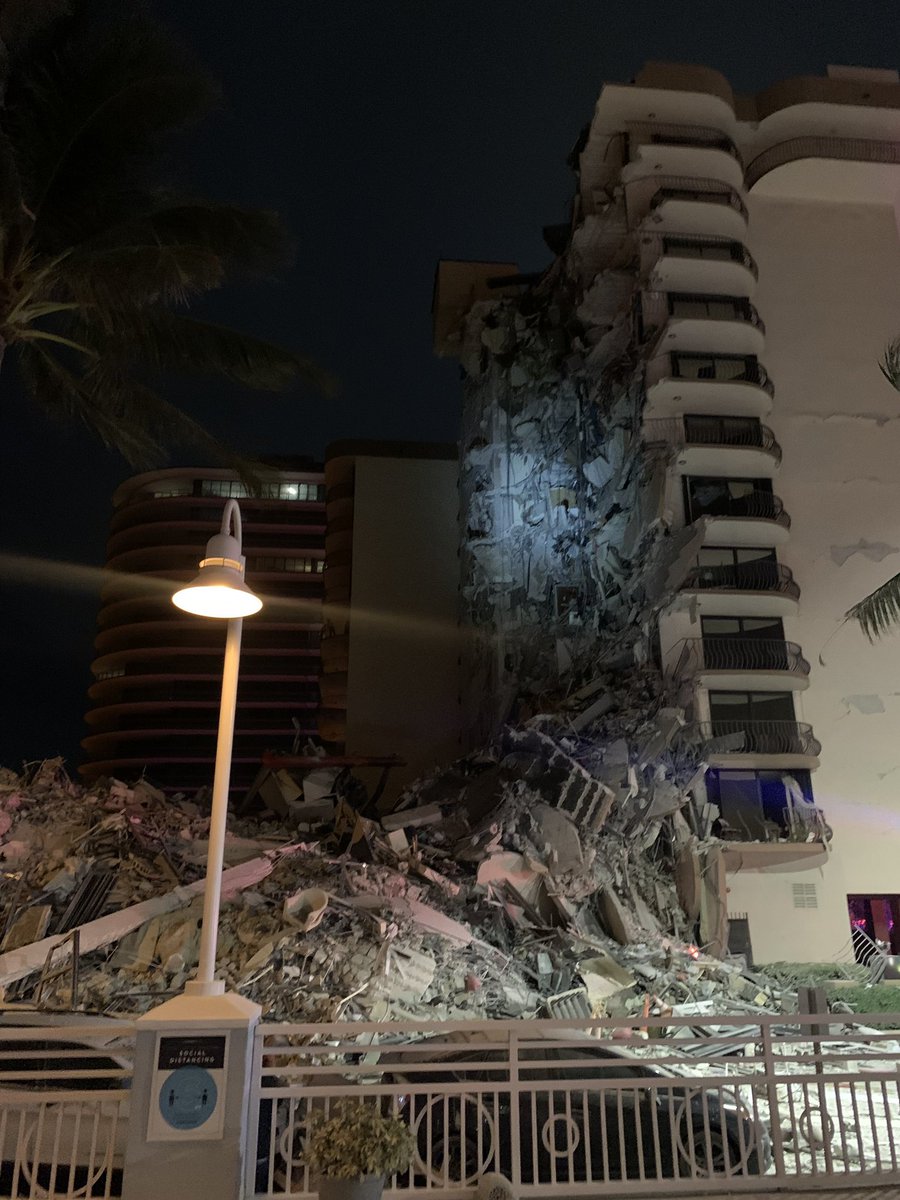 Thats not insanely suspicious as all hell…at best a contractor has changed his name and living somewhere more tropical by now. 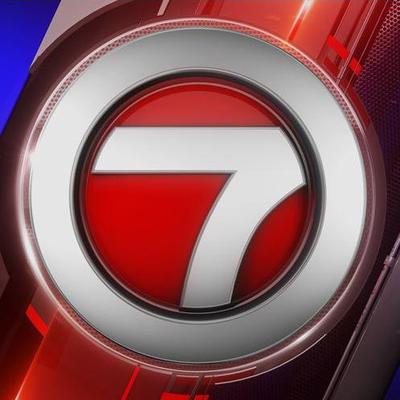 @wsvn
JUST IN: 7News has obtained surveillance video of the moment the Champlain Towers South Condo collapsed in Surfside early this morning. According to a fire official, 35 people were pulled from the collapsed building. Search and rescue efforts ongoing. wsvn.com/news/local/1-d… https://t.co/oeczbumRG9
the.shoemaker June 24, 2021, 2:26pm #7

Apparently happened around 130am too.
Lots of people most likely in there . Jesus.

Casualties expected up in the ( numbers changing as sources updated)…so far only a kid alive…and one body pulled out of the rubble.

@SophNar0747
Residents at the site of the building collapse in Florida previously complained that the building used to rumble/shake, and here the ground looks as if it has a concave: https://t.co/CrvAh4YiEy 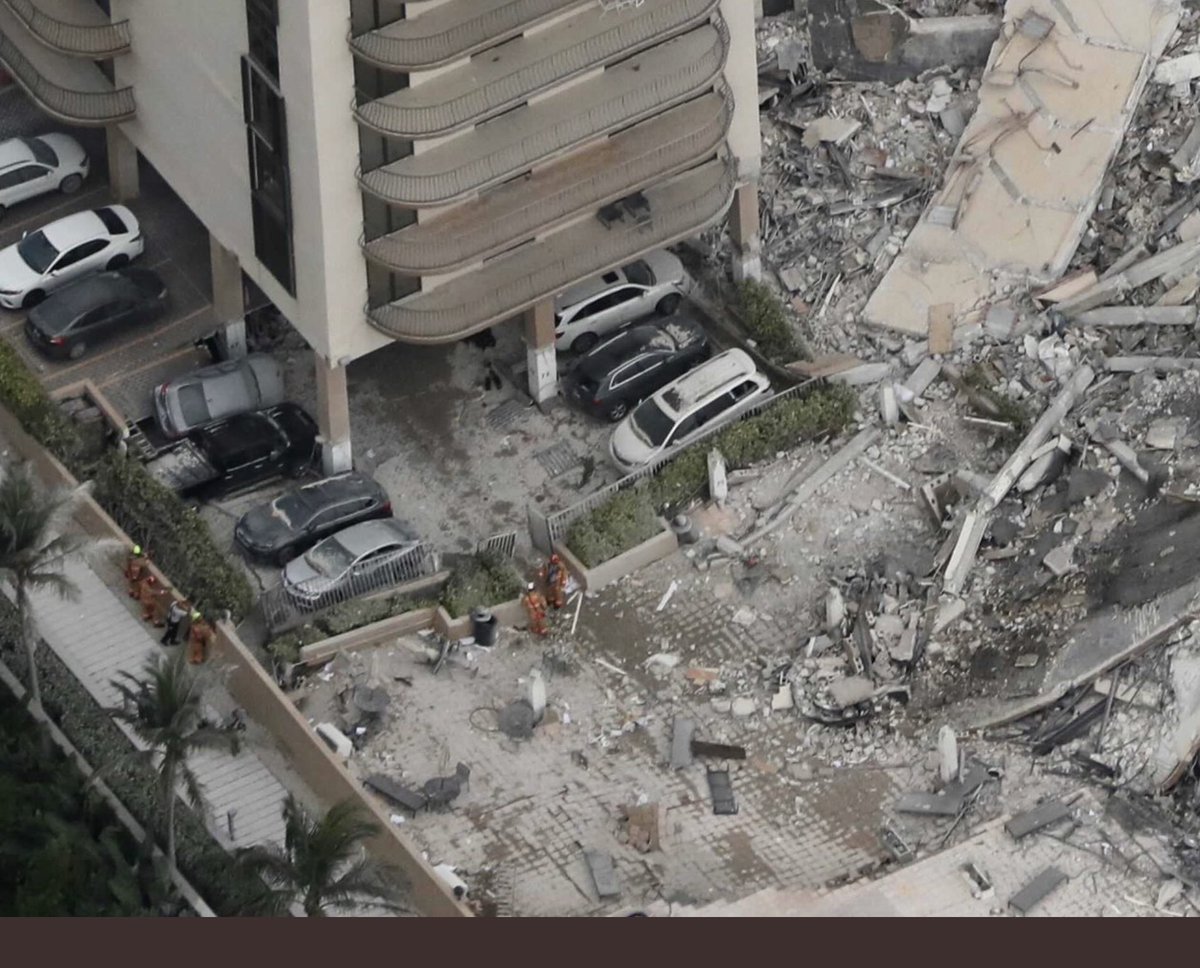 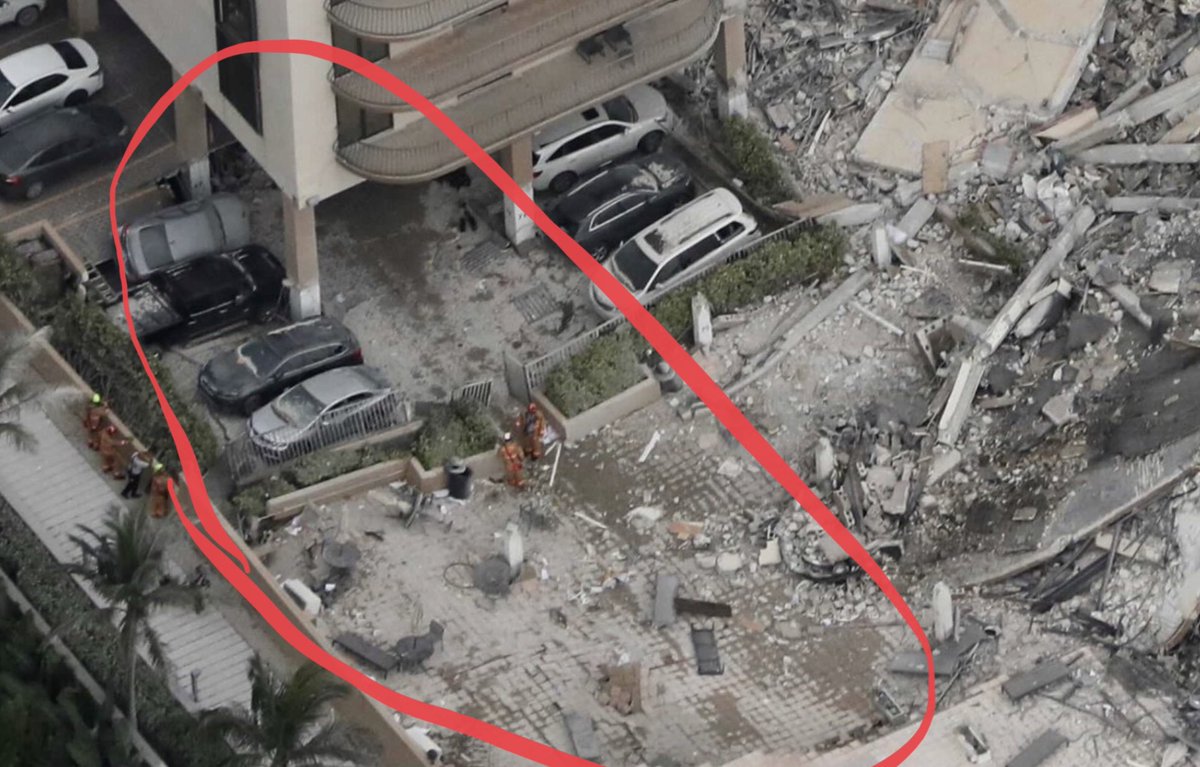 I am more conviced than ever my simple old house that is 1 story is a far safer bet.

Of course saving anyone trapped and suffering is priority number 1, but do they know why it collapsed by chance? Has the contractor actually left the country already?

Yeah seems fairly common down there.

Initial numbers from Miami Dade authorities were scary. Lists of missing coming in have reduced the initial expectations - thank goodness. But loss of life still depends on how many were really inside, not determined yet.

Scarier though that the building had tremors and there was some kind of warning.

@JeffreyGuterman
A man says his family friends and their young daughter were inside the Champlain Towers South Condo in Surfside, Florida at the time of the collapse. However, he has been unable to make contact with them. https://t.co/sclEn8GLYp

Double checking, the Navy test earthquake registered a 3.9M in Ponce Inlet, Florida, but still too far away from Miami (about 260 miles). It’s more likely due to a sinkhole. 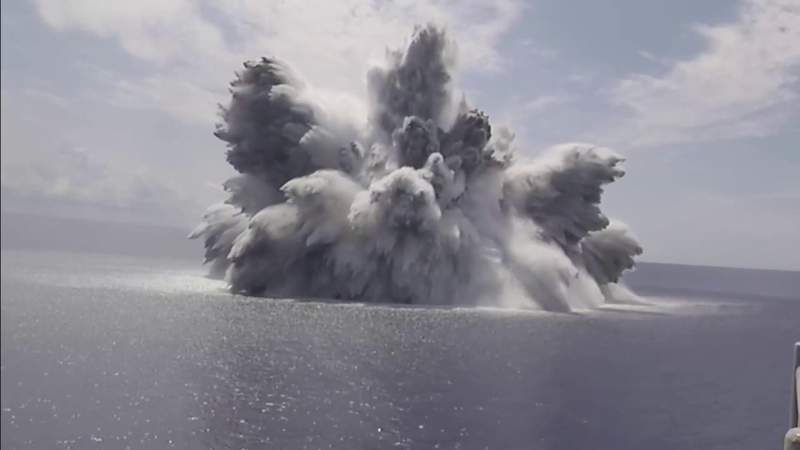 A massive military explosion off Florida’s coast triggered a 3.9 magnitude earthquake on Friday.

(On a side note, this is one of my worries about China using a similar tactic to trigger/accelerate an earthquake in Taiwan which would require China to “come to the rescue”.)

Taiwan which would require China to “come to the rescue

If avoiding nukes, such a powerful detonation wouldn’t be possible

Ignorant opion based on photo says that if sinkhole is the reason, its not nearly severe enough to cause this kind of collapse. Almost surely shitty construction or perhaps years of people saying “dont think too much” at the warning signs.

Budings that size dont implode from a dent under them, its very strange. Serves as a lesson to anyone living in such buildings, dont call people pointing out problems jaded, or dismiss them as negative. Often times people pointing ot problems are justified. Take note and make inquiries. Your life isnt worth it. And most buildings built by small and medium sized buy and sell companies are built as cheap as possible. Not worth ignoring reality. I really do hope everyone is ok. But ya, that looks unlikely

I heard this story and thought it was just a balcony collapse. wooooow

That building fell because of an earthquake. And it didn’t collapse like this one did.

The fatality of this one looks like it will be really really bad.

If avoiding nukes, such a powerful detonation wouldn’t be possible

That’s what I thought too, but actually it’s very easy it turns out, don’t need anything advanced either.

China could simply drill for oil, frack, move underwater sand around over a decade (like in Shawshank Redemption), etc enough to displace landmass and trigger a massive quake along an existing fault.

Top 5 Ways to Cause a Man-Made Earthquake

In the first Superman movie, supervillain Lex Luthor plans to trigger a massive, California-detaching earthquake by detonating a couple of nuclear weapons in the San Andreas Fault. Crazy Lex! That scheme never would have worked, geologists will tell... Manmade and natural earthquakes not so different after all

They may even be doing it unintentionally already by amassing so much concrete across China’s tectonic plate: 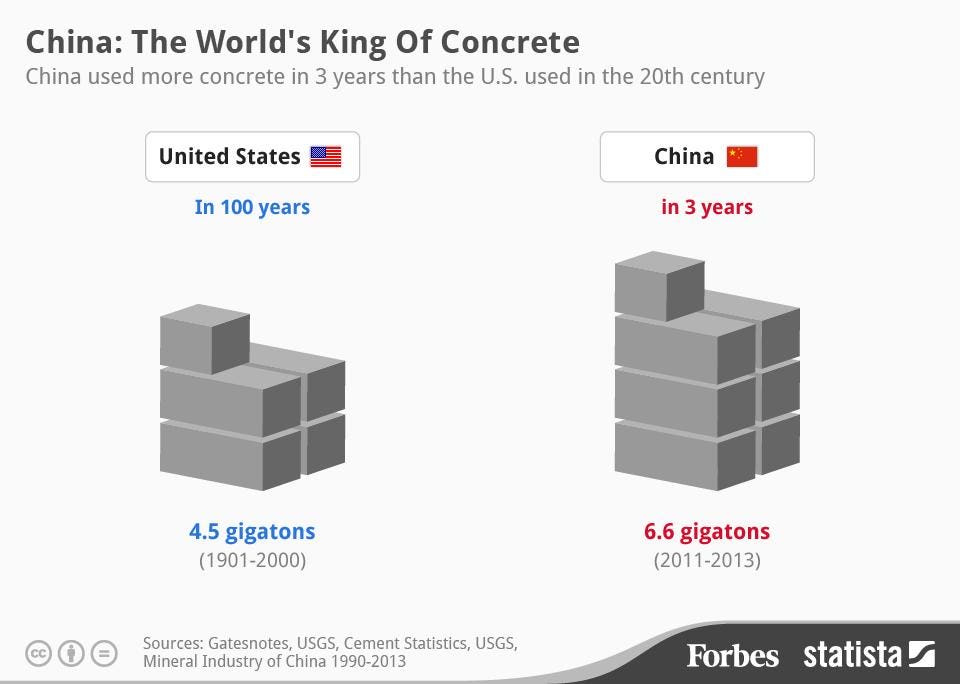 China Used More Concrete In 3 Years Than The U.S. Used In The Entire 20th...

China produces and consumes about 60 percent of the world's cement -- the Three Gorges Dam alone required 16 million tonnes of it. To put China's massive 21st century construction splurge and concrete consumption into perspective, Bill Gates made a...

That building fell because of an earthquake. And it didn’t collapse like this one did.

The fatality of this one looks like it will be really really bad.

The similarity (if caused by that ground depression) is that the ground underneath isnt suitable and the construction of the buildings are complete trash. Just drawing parallels between shitty corrupt construction which is a pretty common problem worldwide.