Any Jacky Chan’s Action movies fans here?
have anyone watch the latest Tuxedo?
how is it?

have anyone watch the latest Tuxedo?

. Guess I’ll have to wait for it to “come out” on VCD. After watching most (40+?) of his movies I started to lose the “magic” of seeing his newer ones. It was cool back in the states being the guy that had seen all these kung fu movies no one else had. But now their EVERYWHERE!

I reckon the Tuxedo will not disapoint with zanny antics, neat stunts and wacky tricks.

I haven’t seen it, but it got lousy reviews.

The link above leads to the reviews for The Tuxedo on a site I like very much, Rotten Tomatoes, which compiles movie reviews from a wide range of sources. Check it out.

I went through rotten tomato’s other Jackie Chan movies to see how they were rated. The ones I liked were rated very high, the ones that weren’t so good were rated low. Sounds like your better off watching rumble in the bronx again.

I love Jackie Chan’s movies pre 1990. After that, he sort of became a parody of himself.

He’s great. He’s always got that Jackie Chan smile.
His kung fu is bad asss. His movies are always funny.
Sometimes, his movies suck, but that just makes him more human.
He’s not the ‘KUNG FU GOD’ (Bruce Lee).
Bruce Lee is too much like a perfectionist, I think. Not much to relate to.
Jackie Chan is like, ‘hey… just smile and do your kung fu! Everything’s OK! You’re a super star, too! Come to Hong Kong! Happy Happy!’
I want to be like him when I grow up… oh, man, I’m already grown up…
But it’s never too late to learn Cantonese.

Jackie Chan is an asshole. He said Taiwanese democracy is a joke! Hope he rots in hell. Sorry…That was a bit harsh. But it was really ignorant of him…

Jesus, touchy much? And by the way, he said the election was a joke, not Taiwanese democracy.

And I feel sorry for Jackie’s son. By Christ did he inherit his old man’s looks…

My bad. Haven’t seen many an election in Mr. Chan’s "Administrative region"that he can compare to. Assclown

I love Jackie…
A t5rue performer…
I was dissapointed with that comment butt…
it never really was explained.I like to think he meant “look at those ignorant KMT jerk-offs making such a fuss…” -

juvenile- If that’s what he meant then nuff respect cause he’s right. But yeah, he should have explained himself or used better wording.

To be honest, the election campaigns on both sides verged on the insane on occasions, and when you add in the fiasco that followed, I don’t blame him. 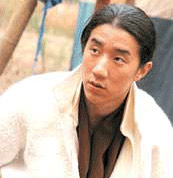 Spitting image of his old man, isn’t he…

I know this is the news you’ve all been waiting for.

Funny you should mention elections in HK, Rob123. The big Legislative Council election is coming up in a day or two.

All I have to say is Tung Chee-hwa .

About Jackie Chan’s comments on the election:

He didn’t say ‘why’ the election was a joke; he didn’t take sides.

Was it a joke because he thought Chen set up his own assassination attempt?

Or was it a joke because the Blues were such sore losers and took to the streets in a ridiculous protest complete with beer-booths and little flashing souvenirs. I walked through those protests when it was packed at night, by the way - it was comparable with Oktoberfest.

To the Blues, the Greens’ victory was a joke, but to the Greens, the Blues reaction to the results was a joke.

His comment, made essentially to save face on the mainland, was very ambiguous.

And his son looks like a really handsome guy. And he can probably do all his old man’s kung fu… I’m jealous…

I know this is the news you’ve all been waiting for.[/quote]
Why’d this get merged? I guess my title was a little vague and I didn’t write much, but I could have changed that. I figured someone would look at it and add more. If I wanted it here I would have posted it here. This thread gotted politicky, which I like to stay away from. I’ll just start another thread and make things a little clearer (not right away though, I’ll wait for a response).

I don’t think Jackie Chan likes to be political, either… His comment was forced.