I got Dinka, Assyrian and Yoruba wrong. 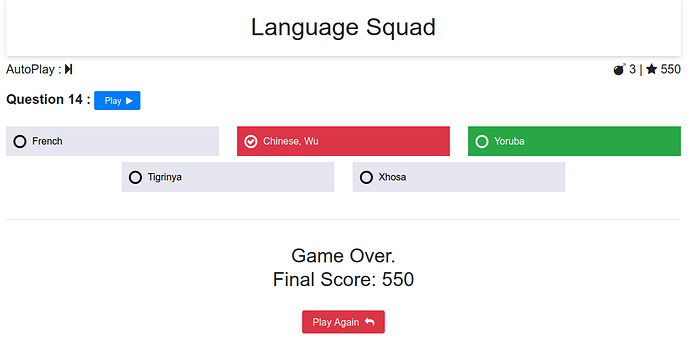 I got Vai, Armenian, and Kannada wrong.

Did you do the hard level for script? I got 1,500. Missed Canadian Aboriginal and Devanagari.

Did you do the hard level for script? I got 1,500. Missed Canadian Aboriginal and Devanagari.

I played again, and got 3 wrong again, but my score improved to 750. I think if you get the later questions with more multiple options to choose from right, you get a higher score.

Lol what? It’s Turkish. I didn’t know what’s Babayin so I thought maybe it’s a dialect of Turkish or something. Apparently. I may have missed three. I’ll try the hard one later.

True I guess I got the assignment wrong. Turkish did modify a bunch of the alphabet though.

Apparently it’s a 3 strikes then you’re out kind of game… So if it ends, you’ve gotten 3 wrong. Why can’t they all just write in American?

Why can’t they all just write in American?

Maybe they do, but just in different scripts… What language is this?

Is it
A. Gibberish
B. Catonese
C. Chinese

I just saw this pic and reminded this thread