The newest member of our family

Will it make a debut at the race in Yilan at the end of April?

On weekends I need a bit rest!

Hi Kids,
I have a bunch of bikes but these two are unfortunately surplus to requirements.

Fast, light, agile and ideal for streaking around the city streets or for a longer ride.
Problem is, I now have three new ones!

On sale in Daan!

Did indeed - obviously it did not work.

How to do it here?

Can you tell me?

Thanks in advance! :bravo:

Thanks Uro - such appreciated.

Potato quality picture from this morning. A couple of changes and it’s become a very handsome bike (before it was too black, too plain): 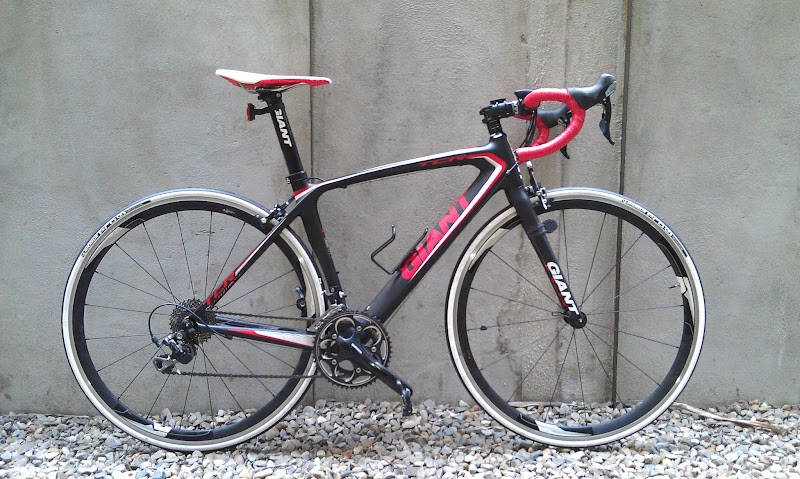 Potato quality picture from this morning. A couple of changes and it’s become a very handsome bike (before it was too black, too plain):

Those new tires really make a huge difference Jesus! Good choice to go with white instead of red.

[quote=“jesus80”]Potato quality picture from this morning. A couple of changes and it’s become a very handsome bike (before it was too black, too plain):

Those new tires really make a huge difference Jesus! Good choice to go with white instead of red.[/quote]
Yup, they help to balance the white on the saddle.

Agreed, those tires and saddle make the bike look much better…and apparently faster because you bumped me off the top5 in that segment.

Agreed, those tires and saddle make the bike look much better…and apparently faster because you took pumped me off the top5 in that segment.

That was before the new tyres…

The speed thing comes after the red tape.

My steel Bianchi Campione d’Italia in 2008, as shown in this thread:

I traded that frame last year for a different Bianchi frame, which I eventually sold, and I bought a 2004 Bianchi ML3 frame in aluminum with a carbon fork in a smaller size (55 cm), which I’d been meaning to do for a while. Everything on this bike is Italian save for the seatpost and the pedals (Time).

I left Taiwan before F.com even started up, but I’ve kept in contact with the land and the language over the years, and was a fairly active participant in this forum for a while. Not lately, though. But the cycling has been a constant passion and means of keeping sane (in a very general but, still, clinical sense of the word). It’s been fun browsing this forum and looking at old threads for the past couple of days. I think I only embarrassed myself in about half of my posts, which I figure is fairly respectable all told, and really all you can ask for.

Going to borrow marasan’s picture that he took of my bike a few weeks ago since I actually do not have a profile view of my bike. Almost exactly one year since I purchased my first road bike, the 2014 Defy3, I upgraded.

The first of its kind, the Laguna ADR
I’ll never go back to caliper brakes.

I thought I had posted a pic here before, but I don’t see it.
Anyway, here she is the weekend I got lost on my way from Yilan to Longtan.

456 days bump … :).
Made in Miaoli, purposely went for 38mm niobium alloy wheels as opposed to carbon.
One 19 year set of Spinery’s on the other bike gives headache enough.
These are relative light but rock solid.
Just will rip off all those decals one day.

Veeery nice. Everytime I see a Primavera frame, I think of that one Australia Taiwanese friend that rides 11-23 in the back and 52-36 in the front on Taipei hills. He’s insane.

Did not know this thread existed!

Part 2 of my formal hello then! Here are my three current babies, all needing a bit of love and attention after they made their way to Taipei.

On the way to some of the climbs in the Grampians (Victoria, Australia).

Taken along the bays just outside Adelaide, South Australia. Was there for Tour Down Under. Adelaide is an awesome place to ride if anyone ever heads down there.

Don’t have too many photos with this bike unfortunately as I crashed out not long after picking it up, and since then life’s been in the way (or that’s my excuse for being +10kg now).

Here’s a #whatyoumissedthismorning though, heading up to Kinglake, in Victoria.

Wanted to get something that’s not common in Taipei, so this was a bit of a farewell present to myself. It is an Aussie company (but mainland titanium), rides well and looks pretty schlick!

Ok then, the other most used baby, almost 20 years old, bought in a time when cycling in Taiwan was not that common.
Just replaced all rolling gear, like new again.
Still going strong, as fast as a road bike.