Hi folks!
My friend is coming to Taiwan for a visit and we are embarking on a road trip at the end of March. The plan is to rent a car from Taitung drive/camp/hike along the South Cross highway and drop it off in Tainan.

There is a good blurb about the Southern Cross Island Highway in the latest Lonely Planet. Info on hikes along the way, too.

As far as Jiaminghu, I remember being very cold and damp in the early morning. We departed camp before dawn, and the temperature was 0 degrees C. The YuShan cane/dwarf bamboo was knee high and icy. It was sunny when we got closer to the lake, though. Don’t drink the water - too much heavy metal contamination from hikers’ discarded batteries. Bring lots of water - water sources are scarce and stagnant, if my memory serves me right. Brackish

In my experience, once you get above the clouds, it is often sunny. Funny that. I am the magical sun wand, but it only works when I am not hiking with Chris.

Have a fantastic visit and hike!

My advise would be to drive the south cross but just do day trips up the various trails. You can climb Dauguanshan, Guanshanling, both over 3000m in a half day, and there’s also the lovely Jhongjhiguan trail near Tienchih. All these are mapped and discussed in LP, though Jiaming just gets the barest mention (will fix that next time).

There is also the really fabulous Lisong Hot Springs to hike down to.

Weather can’t be predicted but it tends to get rainy, cloudy in the afternoon so the above hikes are great as they can be finished before the fog sets in. Driving is okay, but be careful and try to be off the road before late afternoon.

If you want a great but not so demanding hike as Jiaming try Beidawushan, the mountain we just climbed last weekend. Great clear trail, great natural campsite, beaituful scenery and can be finished in two days. You could drive the South Cross, head down to Maolin, then to Pingdong and Beidawushan. I will be blogging about it in the next couple days. I highly recommend it for someone who wants a light taste of taiwan’s high mountains. Plus the chances of good weather are far higher in Pingdong than along the SCH.

Interestingly, I have been thinking about just such a trip across the South Cross Highway with my hiking partners. But again, I would just do the day hikes, including Lisong Hot Springs.

Your basic plan makes a lot of sense.

The weather should be fine there at that time of year.

The lake hike is excellent (don’t worry about the bamboo - has been cut back, and drink from the lake as much as you desire). Avoid it though at the weekend if you really want to stay in the Cabins. Lots of water at first cabin, none in the dry season at the second (avoid staying there until it gets cleaned up) Contact me, and I can give you detailed info on all the nitty-gritty.

Defiantly do some or all or all the peaks/walks around: Guanshanling (try to do first thing in the morning…stay in Yakao Hostel or camp at tunnel), Ta Guan, Ku ha, Jhongjrguan, Yakao Forest road (didn’t mention that…). Unlikely to get colder than 5 deg C at night…then again, this day last year I was at the lake in several inches of unexpected snow. Again email me for various info I’ve been putting together barkingdeerinfo@gmail.com

Driving it will be fine at this time of year. Possible some fog in the evening.

V, so the lake water is okay to drink from now?

Yes the water is fine - as fine as anywhere.

There are various fascinating discussions of the subject on certain forums. The dilution rate is reasonably big and various groups have made great efforts to find every last battery in and around the area. (BTW I was pleased recently to see special collection containers in some cabins for collecting used batteries). A more significant complaint is people relieving themselves in the rain catchment area instead of walking 5-10 mins over the hill.

Some argue the water there should always be treated (yes) while others say the strong sun has sorted things out already…whatever…nip a thousand meters down to the Lakuin Stream for some flowing water instead…bedtime!

But really? Just don’t eat the local grasses I guess.

Amazing, thank you so much for all the info and advice. I will definitely be in touch.
Cheers!!

Went to Lisong Hot Springs today. Took me a while to find it, as I parked up too early.

Didn’t go any further up the pass, so can’t comment on the conditions higher up near Yakou.
Road was in pretty good condition as far as I went, although I nearly grounded the car on some deformed tarmac near Lidao.

They’ve done a really weird thing with the trail down to the river. Ah, too tired to type this up - maybe tomorrow.

So that steep trail down to Lisong HS -

They’ve put in posts ALL the way down on both sides of the path (except for the final scramble) and linked thick rope through every post.
It’s a huge effort, and means that you’ve always got a handhold either side, going down or coming up.
The ropes are pretty new, gleaming white, I’d say this was done this year.

BUT (aye, ain’t there always a but), the ‘posts’ look to be modified steel rebars, sliced to lengths at the factory. They stand-up about belly-high, and the uncapped tops are jagged and sharp around the edge. With the trail being so vertical, it would be really easy to slip and ‘impale’ yourself on the top of one of these. I say ‘impale’, because they’re not pointed and probably wouldn’t penetrate, but would certainly give you a nasty blunt injury.

I met an American down at the river, and we climbed back up together. At the top, both of our hands had bleeding nicks from these bars…

btw - the springs themselves were nice, but the river was still a little high and I only just managed to get across to them. Best to go here Dec-Mar I think.

Thanks for the update. This sounds typical of county level trail improvement. In almost every case it would be better to have left the old system in place.

Trail is steeper than it looks, and these ropes run all the way down until the final steep section near the river.
Also, a close-up of the insanely dangerous blunt tips of those poles. 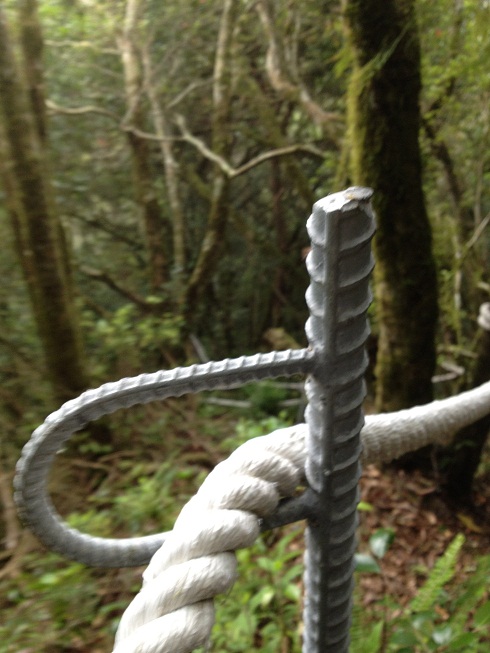 someone certainly can get impaled on those. It seemed like a good idea, but no one thought it through i bet.