City Council ballots won’t look quite the same without Donald Capezza’s name on them.

The former councilman was involved in local government for decades in a variety of capacities.

Originally elected to the Riverview City Council in 1977, he served two, two-year terms.

He was absent from the council table for two years after losing a bid for mayor in 1981, but was subsequently re-elected to the City Council in 1983 and ended up serving in that capacity for a total of 14 years.

He later made unsuccessful bids to regain a seat on the council, including most recently last November when he ran as a write-in candidate.[/quote]

Reporting from Washington— Tony Blankley, who gained notoriety as press secretary for Newt Gingrich during the Republican takeover of Congress in the 1990s and later as a conservative commentator on radio and television, has died. He was 63.

The British-born Blankley, who was a child actor while growing up in Los Angeles, died Saturday at Sibley Memorial Hospital in Washington, said his wife, Lynda Davis. He had stomach cancer.

With his British accent, eclectic tastes and sharp tongue, Blankley turned his stint with Gingrich from 1990 to 1997 into a career as a commentator. In a 1996 profile, The Times dubbed him “The Speaker’s Speaker,” and Gingrich at the time called him “the best known non-presidential press secretary in modern times.”

Blankley was editorial page editor of the conservative Washington Times from 2002-07, and was a regular commentator on television and radio, including frequent stints on “The McLaughlin Group” and KCRW-FM’s “Left, Right and Center.”

He most recently was a visiting senior fellow in national security communications at the Heritage Foundation, a Washington-based think tank, and an executive vice president of global public affairs for the Edelman public relations firm.

Gingrich spoke about Blankley during a campaign appearance Sunday in Manchester, N.H., where the former House speaker is running for the Republican presidential nomination.

He called Blankley “a very, very dear friend,” and described him as a key figure in the 1994 congressional campaign that led to Republicans taking control of the House of Representatives for the first time in decades.

“He was a great writer, and had a terrific career after Congress,” Gingrich said. “His father had been the accountant for Winston Churchill and had come to Hollywood to do finance for the movies, and Tony grew up with this deep passionate commitment that I think he got from his dad, for freedom, a deep sense of affection for Prime Minister Churchill and then later Prime Minister [Margaret] Thatcher.”

Blankley was born in London in 1948. His father, Jack, was an accountant for Price Waterhouse and years earlier, while at another firm, had done work for Churchill.

The family moved to Los Angeles when Blankley was 1 year old, and his father worked as a financial executive in the movie industry.

After his father had him audition for a bread commercial, Blankley launched a career as a child actor. He took singing and dancing lessons, and his accent helped him land roles playing a British boy or a prep school student. He appeared in TV shows such as “Lassie” and “Highway Patrol,” and had a role in the 1956 Humphrey Bogart film, “The Harder They Fall.”

His acting career ended in his teens. He graduated from UCLA, where he earned a bachelor’s degree in political science, and Loyola Law School in Los Angeles. After passing the bar exam, he worked 10 years in the state attorney general’s office.

His political views were shaped by the writing of Ayn Rand and conservatives Barry Goldwater and William F. Buckley. Blankley volunteered for Ronald Reagan’s campaigns, first for governor of California and then for president.

After a two-year stint as a legislative director for Rep. Bobbi Fiedler (R-Northridge), Blankley went to work for the Reagan administration. He was deputy director for the Office of Planning and Evaluation and then a senior policy analyst at the White House. He also did some speech writing for Reagan.

But Blankley made a name for himself as press secretary for Gingrich, starting in 1990. Over the next few years, Gingrich, a Georgia congressman, rose to national prominence and led the Republicans to the majority in the House in 1995.

When Gingrich became speaker that year, Blankley gained some of the spotlight. He carried Gingrich’s case to the media during the next two tumultuous years, which included a government shutdown and constant parrying with President Clinton.

[quote]SALT LAKE CITY – Canadian freeskier Sarah Burke died Thursday, nine days after crashing at the bottom of the superpipe during a training run in Utah.

Burke, who lived near Whistler in British Columbia, was 29. She was injured Jan. 10 while training at a personal sponsor event at the Park City Mountain resort.[/quote]

Way too early, way too young. Tragic loss, and for the sport. She was a trailblazer.

[quote]
Paterno, a sainted figure at Penn State for almost half a century but scarred forever by the child sex abuse scandal that brought his career to a stunning end, died Sunday at age 85. [/quote]
theglobeandmail.com/sports/f … le2310746/

Last surviving Franco cabinet minister that revitalized Spain’s tourism industry in the 1960s and founded the Popular Party (now in power in Spain).

He was the antithesis of politically correctness and prepared speeches. To a man capable of challenging protestors to fights, of reprimanding a collaborator in front of journalists, of saying of a female representative that “the only interesting thing this señorita has shown is her neckline”.

[quote]
Manuel Fraga Iribarne, a politician who founded Spain’s ruling conservative party and ignited divisive reactions as the last surviving minister from Francisco Franco’s right-wing regime, died Jan. 15 at his home in Madrid. He was 89 and had a heart ailment.

In a career spanning 60 years, Mr. Fraga served as Franco’s information and tourism minister and as Spain’s interior minister after Franco died in 1975. The job he coveted most — prime minister of Spain— eluded him. But his influence on the country remained lasting.

Most Franco ministers quickly faded into obscurity after democracy was restored in 1978, but Mr. Fraga soldiered on. He helped write the country’s post-Franco, democratic constitution that was passed in 1978.

Although he repeatedly failed to be elected prime minister, he nudged Franco loyalists toward the political center, founded what is now the Popular Party and groomed Jose Maria Aznar to replace him as leader of the Spanish right in 1989.

In the post-Franco years, he ran his native Galicia region for 15 years and then settled into a seat in the Spanish senate.

To the Spanish left, Mr. Fraga was a reviled reminder of a right-wing regime that kept Spain isolated from Europe and the rest of the world for decades. In Galicia, critics say, he ruled despotically, manipulating a conservative political culture based on patronage to stay in power.

Defenders, however, say that Mr. Fraga promulgated a Franco-era law that did away with media censorship, which was seen as a hint of change in the hard-line regime. As tourism minister, Mr. Fraga worked to open up Spain to the outside world. A famous tourism slogan — “Spain is different” — was coined on Mr. Fraga’s watch. [/quote]

1964-Sonny Liston down for the count. 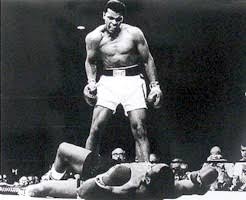 Singer Whitney Houston has died at age 48, according to her representative. Just saw the breaking news on CNN.

Edit: Just beat me to it Funk.

Shame that she lost herself to drugs. She was a great singer and beauty in the 1980s. Serge Gainsbourg liked her

They both died way too early. I guess musicians do that!

Gosh, a bad marriage leading to an early grave. What a pity, what could have been. True. all artists lose momentum, but her career was way too brief for such a magnificent voice and her talent could have developed much more.

I liked the words of Lionel Richie: in the following weeks, lots of horrible stories will surface. Focus on the voice. It used to be that all an artist had to do is survive their craft, no one knew what was happening in their personal lives. Now, with all this twitter and such, it is too much pressure.

She was pretty big in her day.

I grew up idolizing Gary when he caught for the Montreal Expos.

The effervescent Carter, nicknamed “Kid,” is perhaps best known for his part in the '86 Series. He had 24 homers and 105 RBIs that season, then drove in 11 runs in the playoffs.[/quote]

[quote=“k.k.”]I grew up idolizing Gary when he caught for the Montreal Expos.

The effervescent Carter, nicknamed “Kid,” is perhaps best known for his part in the '86 Series. He had 24 homers and 105 RBIs that season, then drove in 11 runs in the playoffs.[/quote]

Just saw this myself. Very sad indeed. He lived in Kirkland, PQ and I would often see him around the hood. During the strike, you could see him and Steve Rogers at the park keeping loose. In fact, when I was 18, I remember getting my lunch at the deli next to my office and John, the deli owner, had beckoned me to the back of the shop, all conspirator-like, where he gleefully pushed play on his cassette recorder. Just as he did, Lights walked in and John hauls him back as well. He restarts the tape and immediately, Gary Carter shouts out, “Oh, I know this.”

He then starts dancing and singing along with the tape. Here’s the song:

Just one of the most amazing memories of my young adult life. My boyhood hero right there in the deli, having lunch and shooting the shit.

The Canadian Football League lost a big man on Sat. LEGENDARY CFL COACH AND GM CAL MURPHY PASSES AWAY AT 79

[quote]He could be crusty and had a reputation of sometimes being tight with a buck. But there’s no denying that when it came to football, Cal Murphy had the Midas touch.

He was part of nine Grey Cup-winning teams as an assistant coach, head coach and CFL general manager. He’s a member of the Canadian Football Hall of Fame and since 2000 had been evaluating talent for the Indianapolis Colts, one of the NFL’s top franchises.

In 25 CFL seasons, Murphy is best known for his 14 years with Winnipeg and was inducted into the Canadian Football Hall of Fame in 2004.[/quote]

Buck Compton, who successfully prosecuted Sirhan Sirhan for the murder of Robert Kennedy (! - I didn’t know that), and who was also the lieutenant who was portrayed as cracking up at Bastogne in Band of Brothers, has died of natural causes at age 90. [quote]Davy Jones, the lead singer of The Monkees, died this morning after suffering a heart attack in Indiantown, Fla., his representative confirmed to ABC News. He was 66.
“He passed next to his passions, his horses, and was one hour away from his wife, Jessica Pacheco-Jones,” his rep said in a statement.

“All of his family, friends and fans mourn Davy’s loss,” Joseph Pacheco, Jones’ manager and brother-in-law, said. “We were fortunate to have such an incredible human being in our lives. Sadly, his time on Earth was cut far too short and he will be missed tremendously by all who knew him.”

The Martin County, Fla. medical examiner’s office will be conducting an investigation into Jones’ death but said in statement that “there do not appear to be any suspicious circumstances” surrounding it.
Jones is survived by his wife and four daughters from previous marriages.

The British born Jones joined The Monkees in 1966 and contributed to a stable of rock hits, including “Daydream Believer” and “I’m a Believer.” The band was formed as part of a TV series about a rock band also called “The Monkees.” The show got canceled in 1968; the group, which included Micky Dolenz, Peter Tork, and Michael Nesmith, broke up two years later.
[/quote]

Widely read conservative Internet publisher Andrew Breitbart, whose flare for battle with politicians and the mainstream media earned him a reputation as one of the nation’s most influential commentators, died Thursday.

I just got up and saw your post. Damn!