Tom Rook and Tom Parker are both British artists living in Taiwan. Both have taken to drawing intricate maps of Taipei. Hats off to both of them! I still can’t decide which Tom’s works I prefer. They’re both appealing in their own ways. Not sure about Rook, but Parker has recently embarked on selling his works. 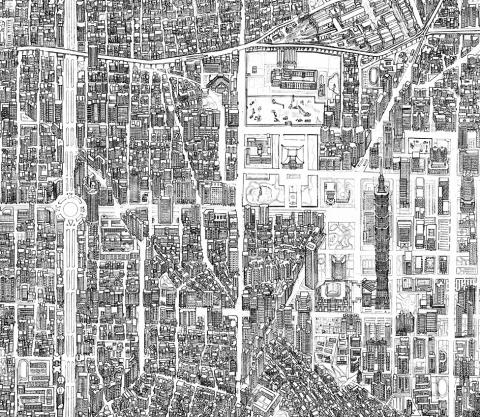 Starting from a simple desire to decorate his bedroom wall in Taipei, Tom Rook spent about a year drawing a detailed map of a large portion of the city, complete with bridges, buildings and open spaces. At the time, Rook, a UK native, was an English... So refreshing after looking at crappy google maps all the time.

Simple and easy to use

Functional, yes, but completely lacking in aesthetics. It’s getting harder and harder to remember that maps used to be art.

The Tom Rook map exhibition is located across from Daan Park in a building bookstore/coffee shop that is in itself worth a visit. Hint: Look for the giant book and dinosaurs. Interesting article on hand-drawn maps of Taiwan that covers both Toms. It calls Rook’s maps precise and Parker’s fantastical. Despite the prevalence of satellite data, traditional map-makers continue to tell remarkable stories with historical and contemporary images of Taiwan.

Both maps would be useful in those old-style travel handouts in hotel lobbies.

This one could use improvements first glance.

Barely recognizes the uniqueness and height of Shangri-la Hotel buildings.

Looks like Tom Parker puzzle is out there somewhere. Looks like Parker is a much savvier marketer than Rook. I follow both of them on FB, and I’ve only gotten ads for Parker’s works.

Well damn I went by here and they canceled it early so nothing WTF.

The Tom Rook map exhibition is located across from Daan Park in a building bookstore/coffee shop that is in itself worth a visit. Hint: Look for the giant book and dinosaurs.