Tour bus flips over on highway no.5

Some other related news…a bus crash in Xindian has resulted in 17 deaths and multiple injuries so far. 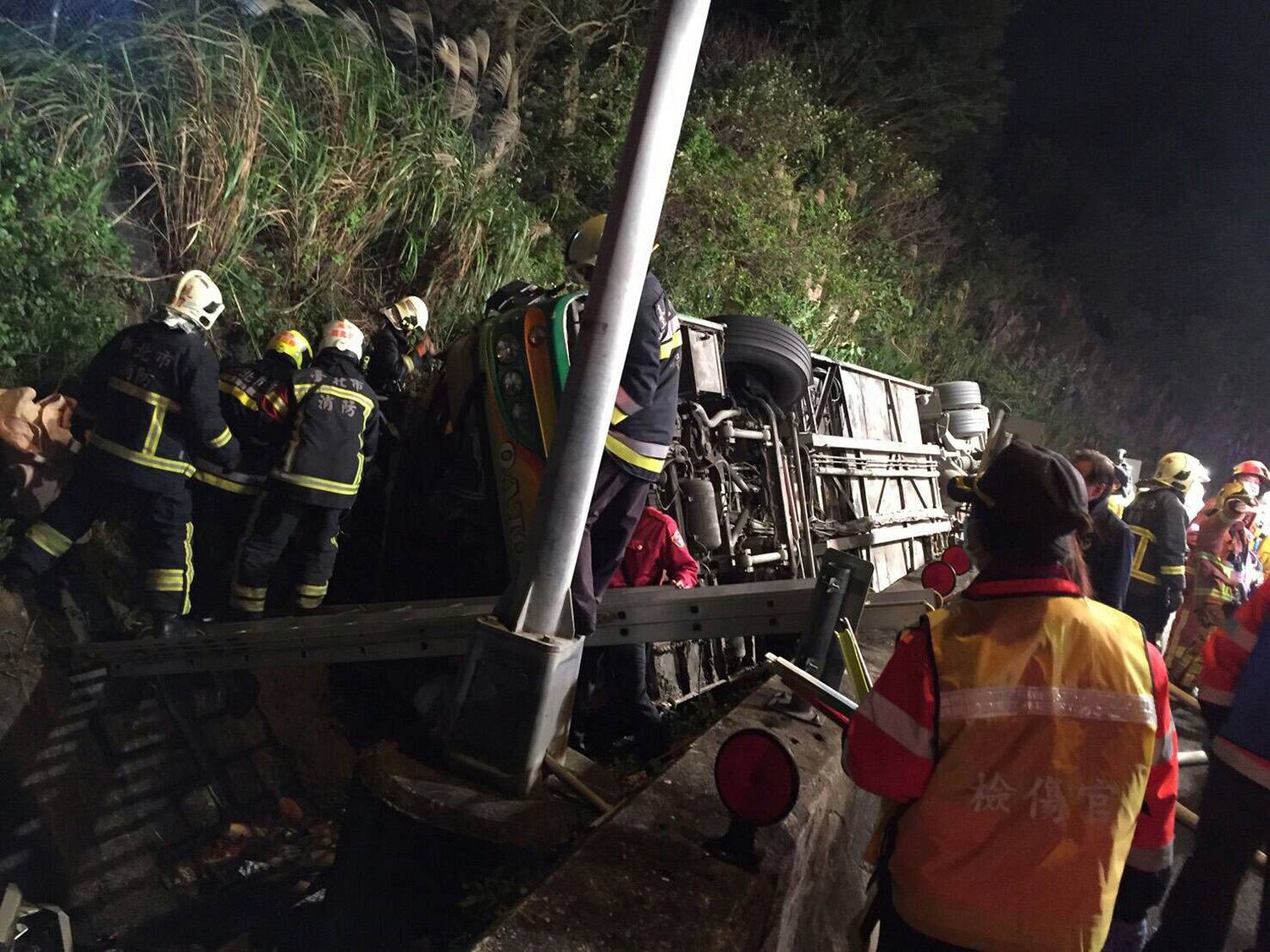 The crash occurred as tour bus was returning from a trip to Wulin Farm in Central Taiwan to view cherry blossoms.A tour bus flips off an exit ramp on Freeway No. 5 killing 32 and injuring 12 on its way back to

From the picture it seems the passengers were all pressed against the side of the mountain. Hence the high number of deaths. May exceed 28 , as some of the seriously injured may not make it.

the photo is really brutal.

whats the public response to this sort of thing? does anybody make any noise about improving the driving culture or is it just us laowai doing that? it seems to be happening a lot with these tour buses recently. i know one guy did it on purpose but still.

I was looking at a FB post on this from Apple News. The comments consisted of several hundreds of people posting Amitabha/God bless Taiwan or words to that effect. A few comments that there seems to be some bad luck going around and a couple of brave souls suggesting that Taiwanese driving skills are a little lacking.

On my Facebook feeds people mostly blame the overworking of the drivers of these tour buses.

My friend sent me this, one writer’s analysis of the driving/traffic situation in Taiwan. A bit of a long read, but it’s nice to see this addressed.

The exact location of the crash is at the freeway 5/3 interchange, there’s a sharp left with a 40km/h limit where the roads merge.

TV news has some dashcam footage appearing to show the bus approaching the bend way too fast and toppling over. Looks like no other vehicles involved.

They were coming from Wuling Farm which is a long drive including a lot of mountain driving. I’ve done it myself many times and it’s really really tiring and deserves rest breaks on the way.

They were coming from Wuling Farm which is a long drive including a lot of mountain driving. I’ve done it myself many times and it’s really really tiring and deserves rest breaks on the way.

Time to give the wheels to the Radar guided neural-nets.

The rescue workers are totally traumatized. They say that when they got to the scene, they called out to find the people… and no one replied.

I can also imagine the carnage. Most tour buses have no seat belts, most people must have been thrown around. They were also elderly, and at that time, after a long day, probably asleep.

Yes, most locals offer condolences but many also ask what the heck is going on, so many fatal tour bus accidents, something has to be done.

I mean, the bus comapny has said that the bus was an expensive one, no cheapo used, paid extra for extra safety, can’t understand what happened. They say.

Cost of the tour was 1100 ntd. That is what they were harging last year for a 2 day to Taitung. One wonders if the margins are so low, what is being cut, what is pushed aside? If the driver was rushed to be in Taipei at a certain time, if he was pushing too tired, SOP. Then accidents are a logical conclusion.

Most tour buses have no seat belts

Reports indicate the bus had seatbelts however the majority of people did not use them.

Analysis of dashcam footage show the bus was travelling at least 20km/h over the posted speed limit, couple that with typical poor driving skills the majority of bus drivers display in Taiwan and the inevitable happens.

Maybe, just maybe, this will lead to some proper standards and perhaps even enforcement of those standards for a period of time. The driving skills and attitude of the majority of tour bus drivers you meet on the roads in Taiwan is absolutely appalling.

How about the design of those exit ramps? Could that be a factor, too?Honestly, they have always given me the hibbie jibbies. They feel too tight, especially coming at those speeds. Maybe a higher safety barrier, most around Xindian are pretty high, though one to conatin a bus would have to be really strong.

This accident reminds me of another one news reported recently. Two scooters collided. Both had fathers who were taking their daughters as passengers. Traveling in opposite directions, one of them took the curve too “open”, invaded the other lane, crashed head on with the other scooter in a narrow two way street. Both men died. Really sad… and yes, shoudln’t have happened if…

How about the design of those exit ramps? Could that be a factor, too?Honestly, they have always given me the hibbie jibbies. They feel too tight, especially coming at those speeds. Maybe a higher safety barrier, most around Xindian are pretty high, though one to conatin a bus would have to be really strong.

Most curves in Taiwan (like exit ramps) are poorly designed. They probably don’t want to spend money to make them longer to handle traveling at higher speeds, so they are hazards. Exit ramps in the USA are usually longer and more curved to handle higher speeds. Driving in Taiwan is like the law of the jungle.

Exit ramps in the USA are usually longer and more curved to handle higher speeds.

After being on the road, behind the wheel, for over 2 years now. I have noticed the on ramps to highways are epically short. Some cars already on the highway are traveling at around 80-100kph and the cars merging are much slower. Resulting in the possibility of collisions.

Also worth mentioning is that those tour buses are modded to make them taller to create extra room and put in those cozy seats.

This way exceeds the engineering parameters for a safe height, making the buses extremely prone to rolling.

If you’ve driven that road you realize it isn’t really an “exit ramp”. The road just ends and turns to the left and merges with Highway 3.

It’s still a very wide road and it’s not common to notice that the road is changing to a sharper left turn. I’ve noticed myself going faster than I should went approaching that particular location.

The tour bus company claims that the driver had a 2 days rest prior to the accident, but the driver’s family says he hadn’t had a off day since lunar new years eve. The bus driver worked for 16 days straight.

Today on the same road from Yilan to Wulin farm another bus went slightly off road, with a wheel on a ditch that forced everyone to leave the bus. No injuries, luckily.

Non-story. This is nothing but the result of the driving culture. I walked home yesterday from work along Tienmou East Road from Chungshan to Tienmou North Road. About 400 meters, I guess. 20! I stopped counting at 20 Effin’ cars parked illegally. A police Land Cruiser must have been called and after they pulled over (illegally, as well) the officers got out and could do nothing but shake their heads. Turned at the intersection. Four cars blew the red light. Tossed out the garbage at 830pm. Not one, but two scooters, one on my walk across the street, one on the way back, roared by scores of people throwing out garbage at high speed…sans headlights. Typical day on the road in Taiwan.