I think the day will come when ridership increases.

Nonetheless, we all know that it requires a combination of crackdown on illegal parking, (much) higher parking fees, parking fees for scooters and decrease of public parking spaces.

I bet that 45% of population using mass transport in NY is mostly because there’s no space to park, any parking space is extremely expensive and police will give you a ticket in a heartbeat for illegal parking.

Exactly,its a mix of carrot and stick. Singapore is a similar size and population density to Taipei, but driving and parking a car is prohibitively expensive, as it should be.

Adding to my comment, Taipei should get rid of the majority of on street parking for both scooters and cars, and charge expensive hourly rates during the normal business hours!

In Melbourne the hourly rate of parking in a CBD carpark goes up to ~$30 aud (~700 NTD) per hour during the day.

They’re doing that. However, when administration changes, things get delayed. Example: The airport MRT was supposed to be opened…4-5 years ago.

Adding to my comment, Taipei should get rid of the majority of on street parking for both scooters and cars, and charge expensive hourly rates during the normal business hours!

Getting rid of it will cause mayhem and outrage. Scooters are already parked illegally and ridiculously, it’ll get worse if they begin to remove them altogether. Starting to charge rates is probably the right way to go, but they would need extra manpower to enforce parking fees on scooters.

Getting rid of it will cause mayhem and outrage

Getting rid of legal on street parking should be progressive. But definitely need more officers to enforce penalties and be stricter for illegally parked vehicles (10000 NTD sounds good to me) .

This is what needs to be implemented in the streets,
http://inextechnologies.com/paid-parking-alpr.html

You’ll notice many of the upmarket areas don’t allow scooter parking on pavements in Taipei. Its a gradual but SLOW trend.

They look like a newer version of the Sevilla trams but the last time I was there was back in 2009.

I think a lot of commutes can be made with public transportation. The mrt goes to a lot of places and there are Youbike and buses. People will go bezerk if you took away the parking spaces, but there is enough public transport for most people.

One big difference in the Kaoshiung tram is the power source. No overhead wires needed for these newer models, runs on quick charge batteries. Also of note, somewhat of a surprise but people follow the traffic rules better around these trams than say in Los Angeles or South Florida (see news about the new high speed rail that has many deadly events). Not much (so far) crossing where tram is coming, to the point I saw people waiting a long time to cross waiting for the tram to pass.

Interestingly a lot of on street car parking disappeared a few years ago in Taichung when the new mrt line was started.
Was quite annoying to be honest as you still don’t have an MRT there!

The percentage of citizens using MRT for commutes everyday is something like 15% compared to 45% in New York. It is still well underused. As mentioned in the article, bus users became mrt users but motorists are still rising. 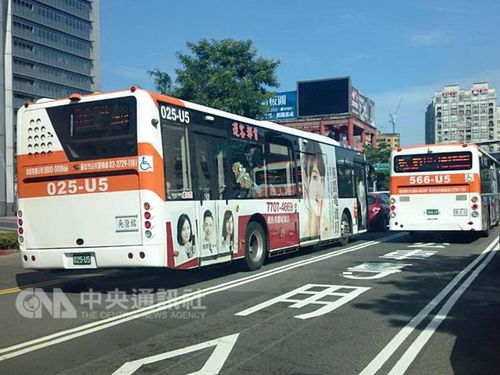 Public transportation usage up in Taiwan in 2016: survey | Society | FOCUS...

Taipei, July 11 (CNA) Public transportation accounted for 18.1 percent of all vehicle rides taken by people in Taiwan in 2016, the highest since data become available in 2009, a Ministry of Transportation and Communications (MOTC) report revealed...

So that’s pretty comparable to 45% in NYC. However you have to account for the fact that 43% for Taipei is bus + subway, whereas 45% in NYC is subway only. However, I think bus usage is probably pretty small in NYC.

The big difference would be commuters coming in from outlying areas. In NYC, this is virtually all via commuter rail over long distances. In Taipei, it is (relatively) shorter distances via scooter.

Taipei will never need commuter rail, because of its geography. The Taipei Basin is a very small area compared to the urban agglomeration of NYC + surrounding suburbs, or the Kanto and Kansai plains, for that matter.

But, the Taipei area will need better MRT coverage in New Taipei City in order to increase transport usage. A lot of that is already in progress, with construction ongoing on the Circle Line, Wanda Line, Ankeng Line, and Danshui Light Rail, all of which are mostly or completely in New Taipei City.

I am also really encouraged by recent developments such as the monthly pass and YouBike expansion.

scooters are still a big part of it though. lets face it the MRT system is pretty good already. if it was covering every inch of taipei and new taipei city people would still use their scooters because they are convenient and cheap, and they are lazy. its a problem.

Current usage is important, but more important is that it’s built for growth. Slow now is part of the plan in preparation for the future.

I love when people ride scooters because it’s one less car on the road and one less person on the MRT or bus. Scooters parking on the sidewalk bothers me but not as much as heavy traffic or overcrowded public transport.

No, you have taken a shorter version of the article I was using. I was talking about daily commutes using public transport.

I can’t find the article I wanted though

What? The things are polluting death traps that take up loads of space

I was free for a long period, but now with the extension you have tap your card.

As a complete coincidence I was reading this article on said tram when the ticket inspector/ conductor whatever the correct terminology is, came to check that everyone had a valid ticket or had taped their card.

Not only the MRT, Taipei’s bus network is really very good and cheap too.
The new 1280 all public transport for a month in Taipei metro area has been initiated as well.
There’s just no good reasons for the number of scoooters anymore up North.

This is a public health problem and the government especially city governments are doing a really shit job at dealing with it especially Mayor Ko as he should be aware of heart problems and deaths which can be caused by air pollution (NO is involved as it acts as a kind of a signaling agent in our blood). That’s not even talking about the lung cancer, the noise, the nuisance , the deaths and injuries, blocking up the pavements, the obesity from riding the damn things everywhere .
Yeah cars should be restricted too.

Also Taipei is becoming a better city for cycling. The bike path on Xinyi road now hardly ever has idiots walking on it