They are all undercover.

Ya, some police in that photo but more private security, some other area much more police. But still all nice people, better than USA police as far being friendly, police in USA seem not as talkative a bit more on edge.

I flew Air American into London, got message bags were delayed but bags arrived on time after clearing the boarder force.

Also nice room on the American 777 aeroplane, I flew KHH to LAX on Cathay Pacific and after few days then to England on American. I love the sporadic hatchet threads on London, England or the UK in general. It’s like people need to run down these places to justify their choice of where they live.

Leftover curry is a solid breakfast choice in London

Well I wouldn’t go there for the food! haha. If anything not good, about UK arrival is more questions, like am I going to work in the UK, what kind of business and where. At LAX , only question was how long will I stay, me three nights, him oh three days (with a smile). I did not get a LAX stamp in my passport which I wanted. The native British outlook would be

Lots of nice places and food in England to be not so pessimistic, some cities in England have more blue sky days than Taipei )or at least Sun like here in Liverpool, or cafe in the library if you want be indoors 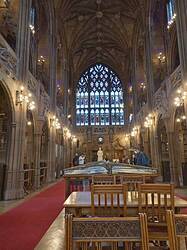