Calls for prosecution after German politician says Obama win ‘a declaration of war’
German authorities have been called on to prosecute a far-right politician for describing Barack Obama’s election as a “declaration of war” on white people and accusing his supporters of being “swept up in Obama fever which resembles an African tropical disease”.

In a statement headed “Africa conquers the White House,” Juergen Gansel, a deputy in the Saxony state legislature from the far-right National Democratic Party of Germany, said multicultural America was seeking the destruction of “pure” national cultures.

Accusing Mr Obama of aiming to destroy the US’s “white identity”, Mr Gansel said: “A non-white America is a declaration of war on all people who believe an organically grown social order based on language and culture, history and heritage to be the essence of humanity.”

Warning that “Barack Obama hides this declaration of war behind his pushy sunshine smile,” Mr Gansel, whose party sympathises with neo-Nazi groups, said that Mr Obama’s election was the result of “the American alliance of Jews and Negroes”.

He concluded by declaring his hopes that Mr Obama’s government is unsuccessful.

“It would be a gross irony of history if the first black president drove his clientele of minorities to openly revolt due to his grandiose domestic failure, and the much-touted American dream became a nightmare,” he said.

Yikes. :fume:
A little wikipedia research confirmed my hunch that the vast majority of German people consider Mr. Gansel and his party to be a national embarrassment that they wish would go away. I don’t feel the need to lecture any Germans about this, I am quite sure that every European I know in Taiwan hates this guy and his ilk already. Even though for the past four years a lot of my non-American friends kept lecturing me about Bush even after I said I didn’t vote for him, and now a lot of my non-American friends are reminding me that there are a lot of racist idiots in the US and they think Obama will be shot, and some of them seem kind of smug about it, like they want to take my unhappiness away from me, I am not going to do as was done to me and make innocent people miserable by lecturing them about politicians they don’t support and can’t do anything about. I will not ask any Germans why they don’t remove this guy from office, because I am better than the people who kept getting in my face and telling me to impeach Bush even though they know I don’t have that power.
I am starting over with a clean slate, I am going to forget about all of the hatred that was directed towards me during the Bush years and not be bitter. I am not going to say “I told you so” to all of the people who told me that America couldn’t elect a black president. I am not going to make the claim that this guy represents all Germans or Europeans, because I know he doesn’t, and I will resist the urge to do it just to get a rise out of you.
But you know, some of these threads on f.com that are pages and pages long, about some repub’s “uppity” comment or whatever Lindsay Lohan said, some of you are enjoying those a little bit too much, and I am posting this to remind you that America doesn’t have a monopoly on right-wing nutjobs.

So let’s all get along.

And I won’t be bringing up this old irrelevant fart in any discussions with Austrailians, either.
spiegel.de/international/eur … 35,00.html
Klaus Emmerich has long been a figure in Austrian television news. His journalism career spans 61 years and includes a stint as a correspondent in Washington D.C. for ORF, Austria’s public television station. He is something like the Wolf Blitzer of Austria.

Or, at least, he was. Now, the respected US expert has stained his own report card with a string of blatantly racist remarks regarding the election of Barack Obama in the US. Speaking on a talk show on the Austrian public channel ORF on Wednesday, he said: “I wouldn’t want the Western world to be directed by a black man. When you say that is a racist remark: right, without a doubt.”

Obama’s victory was an “extremely disconcerting development” he told the Austrian Standard on Wednesday, because "blacks aren’t as politically civilized.

…
No, this guy does not represent any Australians I know, just as American rednecks do not represent me. No need for me to mention this old dinosaur ever again in fact. I hope his kind will be gone from the world soon, and i have confidence that most Australians feel the same way.

Goddamn Australians! Nothing ever changes. 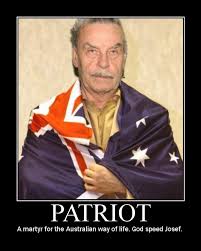 Now that would be funny if the actually background wouldnt be that horrific.

And yes, we still have our share of idiots running around as well, despite their own attempts to hit the wall (way too late in Haiders case…).