I didn’t think I’d bother after seeing the film, but it actually goes much deeper than that. A third through it, enjoying it. Very engaging, dual narration.

Is it better than the movie? I hated the movie.

I liked the movie when I saw it like 8 years ago.

The book is good. I’m about a third through it. Nothing that will end up on my all-time favorites list, but diverting enough.

In my endeavor to read out of my wheelhouse fiction, I present: It’s a bit woke and intersectional, but very well written for, I will assume, a literary crowd. She’s smart, well read, and writes smoothly. About 1/3 of the way in.

It really is. I’m not a big fiction reader because most of it is English teachers writing on the side.

She’s good. No joke on my part.

The start of this new section is simply brilliant,

Here’s a peek. She brings out the nerd in me for literary layers and depth. 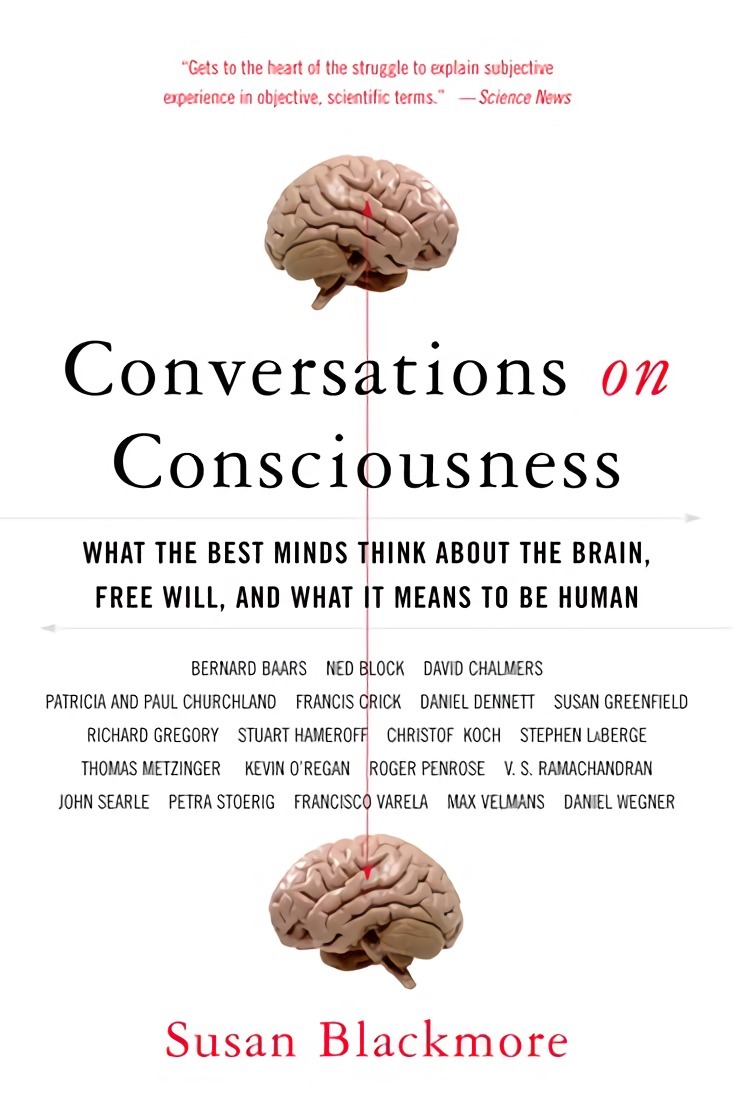 Conversations on Consciousness: What the Best Minds Thi…

Reading this. Big fan of Sue Blackmore, she wrote originally on Meme theory and writes a lot about consciousness. In this book she interviews famous philosophers, psychologists, scientists etc who study consciousness and asks them basically the same questions. What an exceptionally well done novel. Totally engaging all the way through. Shout outs to Carver, Jack K and DFW. Thrilling ending. Lovely memoir of a rich and educated Vietnamese family coming to America. A non-combatant look at the country during war time.

Got this at the library as well. It’s fun. I wish I had an predatory bird app that scared the shit out of the goddamned gopher what’s been eating my garden down to the dirt. After a lot of not-so-serious books, I’ve started reading this. Looks promising.

Still haven’t read The Song of Achilles, though, because I don’t feel like crying.

I’m on book 2 of a 4 book short stories collection by Random House.

Lots of stories about Asia.

I’m touched. Coincides perfectly with the Somerset Maugham short story I’m reading at the moment, The Social Scene. I’m also having flashbacks of loves, of Thailand, of love with a Thailand girl, of love of Thai food. [20220729_103531] This is a book that I’ve read so that you don’t have to. Sir Backhouse was an example of a certain type of late Victorian gentleman — hyper-educated, adventurous, floridly eccentric — who by the end of the 19th Century had penetrated the remotest corners of the globe. Backhouse claimed to have penetrated none other than the Dowager Empress of China herself, a claim that it is no longer possible to refute or confirm. Certainly, with his fluency in Mandarin and Manchu and his intimate familiarly with many prominent Manchu aristocrats, Backhouse was a Westerner with almost unique access to the secret lives of the Manchu ruling class. His descriptions of the high-end boy bordellos of Beijing, for instance, are undoubtedly based on first hand experience (the appropriately surnamed Backhouse acknowledges himself to be a “Rabbit General” or passive homosexual by temperament). Such descriptions provide fascinating glimpses into a hidden world: if Western missionaries were privy to the sodomitical shenanigans and hot sweaty donkey sex of the Manchu elite, then it wasn’t something they wrote home about. What vitiates the worth of Blackmore’s memoirs as a historical record, unfortunately, is his known proclivity to mythomania: he claimed, for instance, to have bedded not only Oscar Wilde (possible if unlikely) but also Arthur Rimbaud at a time when Rimbaud was no longer in Europe. Perhaps I’ve led a sheltered life, but this reader finds it difficult to give credence to Blackhouse’s claim that Cixi possessed an abnormally enlarged clitoris with which she performed anal sex on him. Her claimed predilection for the “English vice” (flogging and heavy spanking), likewise, seems suspiciously like a transplantation from Blackhouse’s own experiences in merry England. And as for the scene where a jealous pet fox mauls the penis of a palace lady’s paramour: that really pushes credulity too far. What we are left with, then, is a delightfully scandalous memoir comprised of events, some no doubt true, others palpably false, without any way of sorting the chaff from the wheat. We can’t even by sure of the answer to the central question: did he actually ever dee the Dowager? And without knowing that, all his descriptions of Cixi’s pillow talk, political pronouncements and perversions need to be taken with a pinch of salt.

did he actually ever dee the Dowager

Doubtful he would have had that kind of access, so to speak, without having his balls chopped off.

Doubtful he would have had that kind of access, so to speak, without having his balls chopped off.

Well she wouldn’t have been the first female ruler to take a male lover: just think of Cathy the Great or Wu Zetian with her collection of 男寵. With Blackhouse’s connections an audience/tete a tete with the dragon lady was definitely possible. And from there Cixi deciding to taste foreign devil sausage in the boudoir doesn’t seem such an impossible leap — the palace eunuchs wouldn’t have the had the balls to tut-tut and, besides, her taking Blackhouse as a lover would only have been mildly scandalous (and that because he was a foreigner, albeit a Sinified one, not because the dowager empress was expected to remain chaste). Which is not to say it ever happened: other than Blackhouse’s own claims and vivid, precise descriptions, the only independent corroboration, and that weak, is that Blackhouse was rumoured at the time to be the Dowager Empress’s lover.

An easier, more fun (not to mention more honest) version of the story is the book Hermit of Peking: The Hidden Life of Sir Fdmund Backhouse by Hugh Trevor-Roper, of all people.

The arrival of an unpublished memoir offering up a scandalous version of the hitherto blameless public life of the revered oriental scholar, Sir Edmund Backhouse, sets Hugh Trevor-Roper on the trail of an outrageous confidence trickster. One of the great detective stories of our age, told with a pace and an infectious delight in the process of historical research, “The Hermit of Peking” would have made an outrageously imaginative work of fiction but for the fact that it is all true. Trevor-Roper unearths scholars with bizarre sexual fantasies, eunuchs, rare manuscripts and a malicious dowager Queen, and sets them all against the backdrop of a decadent and intrigue-ridden Imperial Court.

Hamlet.
The ghost of the King of Denmark tells his son Hamlet to avenge his murder by killing the new king, Hamlet’s uncle. Hamlet feigns madness, contemplates life and death, and seeks revenge. His uncle, fearing for his life, also devises plots to kill Hamlet.

Got about 1/2 way through. Some parts incredibly insightful, other parts random naval gazing to the point where I’m saying, “is she still writing about the woman she heard about from some stranger’s anecdote?”

Hopefully, this will be an improvement. Gotta love summer vacation and truly free public libraries. Merca!