It is remarkable, that practically overnight they turfed out the old system, which seemed quite fine, and replaced it with something that simply muddies the waters. It all became less scientific, not more.

They did something similar in the UK. The excuse was that the number of deaths was “overwhelming the system” and corners had to be cut … despite the fact that deaths never actually increased much beyond a normal flu season, and then only in transient peaks. The obvious solution would have been to recruit some more manpower instead of (as was actually done) shutting everything down.

And here in Taiwan, I’m sure some people will suggest that the authorities are doing the best they can under difficult circumstances. Well: here we’ve got a bunch of people who have set themselves up as Generalissimos for Life (or for the foreseeable future), have unilaterally suspended the Constitution, and commandeered the entire resources of the country to “fight COVID” … and yet they’re unable to get some clear information about the deaths of a few dozen people into a daily Excel spreadsheet. Even though some faceless bureaucrat already figured it out years ago. If these are difficult circumstances, and they’re doing the best they can, I wouldn’t want to entrust them with anything more complex than doing the laundry.

What does, “Directly attributed to the disease” even mean? Are you saying that means…

Chou Jih-haw (周志浩), head of Taiwan’s Centers for Disease Control, said this. Your questions should be directed to him.
But “directly attributed to the disease” is pretty clear.

That statement is quite obviously bollocks

You know it much better than the head of Taiwan’s Centers for Disease Control.

As with VAERS or covid deaths, medical professionals, who are allowed to access detailed private medical information of those people, make the decisions how their deaths are categorized.
Public has not access to such private medical data. It is abbreviated and anonymized in the reports.
Asking for death-certificates that only family members receive to be made public is ridiculous.

Public has not access to such private medical data. It is abbreviated and anonymized in the reports.

Yes, I know that’s the excuse generally given, but since it’s obvious to any casual observer that several of these deaths (perhaps a majority) cannot possibly be “directly attributed to the disease”, serious questions should be asked, and they need serious answers. And the CECC really strike me as very unserious people.

I’m quite amazed at the willingness of people here to make excuses for unprofessional behaviour (or possibly worse). A great deal of public policy (and the validity of some emergency legislation) hinges upon whether the CECC are being honest. It is in their best interests - if they are being honest - not to obfuscate the facts. As @FairComment said, if the precise details of the death certificates cannot be divulged, then other methods of conveying the same information are possible, and it doesn’t take a genius to figure out how.

But “directly attributed to the disease” is pretty clear.

If it is “so clear” then I ask you to please explain it in plain English. What does that mean to you? Does it mean to you that nothing else apart from Covid caused that death? I’m asking you specifically.

If you take “directly attributed” to mean “Covid alone caused this death” then to a lot of people, that seems quite a lot to swallow, especially when these deaths pretty much all have severe comorbidiites such as heart and lung diseases, cancers and so on.

If we take their explanation as it is, then the way the CECC are labelling these deaths make it appear that none of these comorbidities played any part whatsoever in these deaths.

Personally, I find that very hard to believe, and possibly the way they are labelling these deaths is wrong. They’ve confessed they’ve previously labelled other so-called “Covid deaths” wrong in the past, so they have a history here in that regard. They are clearly not above making serious errors in death labelling.

One also wonders what the point of becoming a doctor is, if, after years and years of training, observation and clinical practice, one is simply told to “follow the WHO” in rubber-stamping suicides and drownings (among other things) as “Covid deaths,” or whatever other instructions they hand out which may be similarly clinically unsound.

I would think it would be highly embarrassing.

Well, it’s this sort of thing that led to mass protests among NHS staff in the UK. As I mentioned before, the onslaught of COVID horseshit was the last straw for one particular family member; she went off to work in a comfortable office doing research instead of helping sick people, because the gubmint was sending a clear message to highly-qualified, hardworking doctors that their services were not valued.

The doctors I’ve met had a fairly robust professional ego. I suspect a few would have bristled at having to hand their nuts in a jar over to the WHO.

Most appeared to cave, though, lest they lost their jobs

I’d rather blame it on the economic stress -from people in service industry who lost their jobs-, plus being cooped at home with granny, grampa and the kids all day and night is not conductive to passionate evenings.

In my experience, irregular menstrual cycles lead to more children, as people think they are safe, nah, it’s just a normal delay, not an 18 year headache one. Surprise!

Finally, most people here have trouble conceiving because they get married in their 30s, and start child making almost by 40s, with already lower sperm/less eggs to work with. Fortunately, IVF is affordable and there are no ideological/religious constraints…unless you use a Catholic hospital. Even the government has subsidies for IVF.

Those reasons wouldn’t account for a 23 percent drop in one year.

Are those numbers definitely correct? 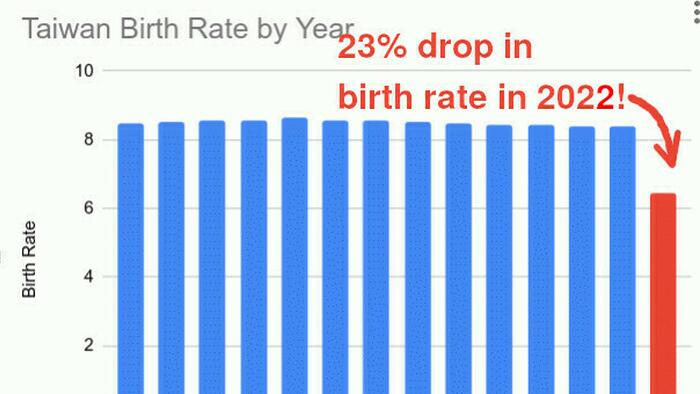 The Depopulation Of Taiwan

This deserves its own thread.

That site is a fucking cesspool.

It’s been that way since I’ve been following it. Maybe 18 years or more?

Get the official stats, not Wikipedia.

Society
Taiwan’s population declines for second straight year: MOI
01/10/2022 07:52 PM
Listen
Image for illustrative purpose only (source: Pixabay)
Taipei, Jan. 10 (CNA) Taiwan saw its population fall for a second consecutive year in 2021 to a level not seen since 2013, according to the latest household registration statistics released by the Ministry of the Interior (MOI).

One major factor explaining the decline was negative net emigration, with 16,733 people immigrating to Taiwan from overseas and 183,369 emigrating abroad during the year, the figures showed.

Also contributing to a lower population was the greater number of people who died than were born. There were 183,732 deaths in 2021, the most on record in a single year in Taiwan and 153,820 births, an all-time low, the figures showed.

The number of marriages in Taiwan also dropped by 7,096 from the previous year to another single-year low of 114,606, and the crude marriage rate was 4.88 marriages per 1,000 people.

And remember folks:single parenthood is a no no here. As in not getting married and having the kid is an scandal, even if wealthy. Sigh.

and we have a thread for that already

Curious if anyone has dug into the numbers (clearly the author of the linked article did not). Is the further decline in growth rate reported driven by less births or more deaths?

Population decline has been coming for a long time. Pandemic most likely accelerated the trend.
Same happens in Germany, Japan, China and in many other countries.

Pandemic most likely accelerated the trend.

All things considered, zero hedge and otherwise, I guess I’d be holding off getting the incoming Novavax jab, if I was at all concerned about future breeding.

Then again, if said data is true and accurate, maybe the jabs4ever! die-hards becoming impotent is some sort of natural selection taking place, as we speak.

Could be a win-win.