You can buy 2K clear from most paint shop in Taiwan. Strongly recommend wearing a 3M mask when spraying it though… it gives you a bad cold otherwise and I can’t see this being good for you in the long term. It’s nothing like nitro.

Make sure you have holes in the bottom of those barends to run cables for the bar end adapter. You also dont need a EW-JC130. You should run one long wire 1200-1400mm from the ew-rs910 to the 4 way junction box as it follows the rear brake line cable from your right shifter. You run one 700mm - 1000mm cable from one shifter to the other internally through the bars. and then one 350mm cable from the right shifter to the ew-rs910. It will look much better and be cheaper than the ew-jc130.

Shimano is always updating their firmwares, they are not trying to make you go 12 speed, it looks like you have some things routed incorrectly in your setup on your photo.

Yes some are routed incorrectly in photo I was messing around different combos, all works whatever I do.

I did say the EW-JC130 came with the kit I bought, to do it your way may be neater but will mean buying another cable and doing away with expensive EW-JC130 , that would be more expensive for me.
I will follow your routing advice using the Y cable instead of extra cable I didn’t receive.

I not sure need to drill hole bottom of the bars for bar end, I should be able to route through cable route?

My ubike easy card doesn’t work now so waiting for ARC so I can setup, not doing job until I can use it.

Just adding YouTube video using simple diagram showing the EW-JC130 being used.
This is the route I shall be using. 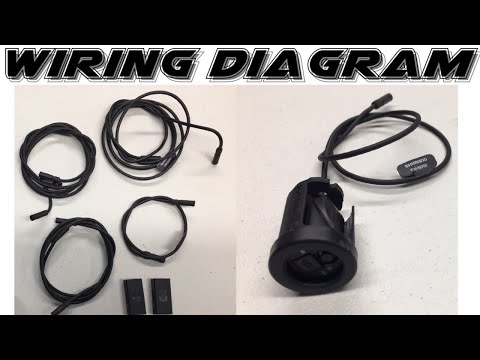