Cluster of earthquakes in Chiayi County overnight - nothing big, but very shallow - one as shallow as 5km.

I’m nervous now when i see cluster activity coz that’s what happened here. Whereas ‘our’ fault line should only be capable of small to mid-size quakes, that’s not the case in Chiayi, which is very much prone to a big one

IS that related to the 921 major event in SM lake/ chi chi area?

And on New Year, no less. Hope we are spared such heartbreak again.

IS that related to the 921 major event in SM lake/ chi chi area?

I’ve got no idea. You’d have to ask an expert, but most of them are either too scared to say anything in case they are wrong or busy writing pointless academic papers to insure they keep getting funded.

On the other hand, cluster earthquake activity is a common phenomenon in Hualien and hasn’t escalated to a major earthquake there in recent times.

The ‘funny’ thing about earthquakes is that in themselves, they are actually pretty much harmless - it’s the man-made structures that fall down that cause all the death and destruction (ok, tsunamis and landslides are the exceptions)

Another pair of earthquakes overnight in virtually the same place as the previous night’s trio in Chiayi - and probably more that didn’t register with CWB. I’d be getting pretty jittery if i lived in that area

There has been some movement in Kinmen. I do not recall ever seing quakes over there.

In the afternoon there was a 4.8 in the mountains between hualien and yilan. Felt a bit of shaking on the bed, it was the first eartquake I felt in quite a long time.

Yesterday was the anniversary of the Tainan quake. Among the saddest things so far: when the building toppled over, seven kids became orphans, six were left with only one parent.

I’m on the top floor of a high rise in Taichung, almost nothing here, thought it was in my head at first

Got woken up here in Kaohsiung. Back to sleep now.

Apparently there was a 6.7 in the Philippines 2 hours ago.

This one was pretty scary, felt the same way as last year but apparently 2016’s was slightly stronger. Thanks God no injury reported. Heard ambulances ten minutes later which got us nervous but glad no one was killed or injured this time.

CWB measured the main quake at 5.6. Several shallow aftershocks. Tainan residents are no doubt feeling pretty jittery given last year’s big quake.
Hope that was the worst of it…

Also noticed there was a small quake in Hsinchu recently at a depth of only 1.5km. That’s the shallowest quake I’ve ever heard of. God help us if there was a big one at that depth

Seems like it has quietened down there now S, so that’s good.

Were there any fore-shocks, or it just came out of the blue? How long did it last? Was it stuff flying off shelves level?

Something i don’t quite understand. It was measured as a 5.6, but CWB reports the ‘local largest intensity’ as 6 for Tainan City. Anybody know how that works?

Is it like the weather with the actual temp and the apparent temp?

There were 4 injuries, a few aftershocks…and a couple if trolls: 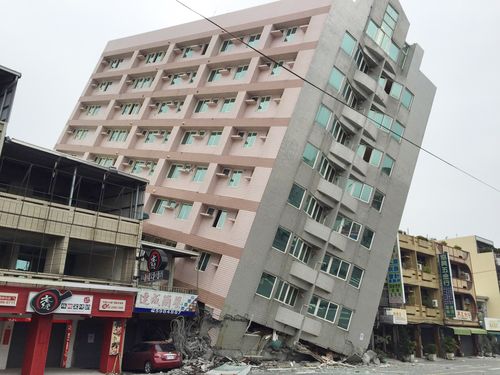 Two suspects interrogated by police.Two Tainan residents were being questioned by police about their use of a picture from last year's earthquake to claim that a building collapsed during the 5.6 tremor in Tainan Saturday morning.

Taidong Council, how you doing down there?