This guy’s looking more and more guilty of more and more things. International sex trafficking with a marijuana entrepreneur? I hope this doesn’t turn out to all be smoke and mirrors, because it is hilarious!

A trip to the Bahamas taken by Rep. Matt Gaetz (R-Fla.) with a marijuana entrepreneur is reportedly part of a federal sex trafficking investigation into the congressman.

Republicans: Democrats are all sex trafficking pedos despite no evidence or charges!

Also Republicans: Matt Gaetz denies being a sex trafficking pedo despite overwhelming evidence and being under FBI investigation, so let’s give him the benefit of the doubt and also let’s do a fundraiser for him! 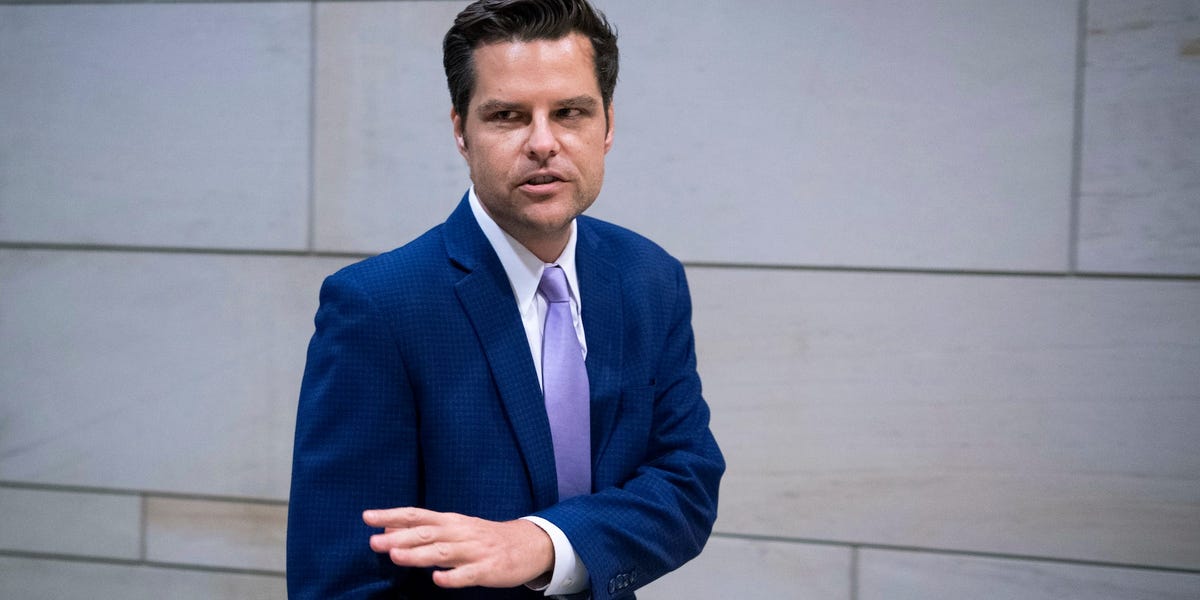 It was reported last week that the DOJ was investigating whether Gaetz had a sexual relationship with a 17-year-old girl and paid for her travel.

Has Jim Jordan his own thread?

They should look into the possibility of Matt having a pizzeria somewhere.

Blimey! He’s picked up a lot of dirt in a short time on this planet.

If he switches sides, he’ll get away with it.

If he switches sides, he’ll get away with it.

No comparison between Franken’s dumb frat boy pics of him pretending to squeeze someone’s tits, and Gaetz actively trafficking in a pedophile sex ring.

“It is a shame that the Left tries to drag my dating life into their political attacks, but it’s no surprise — when your ideas suck, you have to stoop this low,” the Gaetz email said.

Pretty sure having sex with underage girls is not “dating”. Strange he would refer to allegations of sex with minors and sex trafficking as being related to his “dating life”…

Gaetz has such a punchable face too; like Eddie Munster’s retarded older brother.

Gaetz has such a punchable face too

A face to ‘break’ in a baseball bat.

A second staffer for Rep.

I guess he was quite a bully in high school.

Yeah, this story is such a shame. He seemed like such a pleasant gentleman. [/s]

In two late-night Venmo transactions in May 2018, Rep. Matt Gaetz sent his friend, the accused sex trafficker Joel Greenberg, $900. The next morning, over the course of eight minutes, Greenberg used the same app to send three young women varying sums of money. In total, the transactions amounted to $900," The Daily Beast reported Thursday. "The memo field for the first of Gaetz’s transactions to Greenberg was titled ‘Test.’ In the second, the Florida GOP congressman wrote ‘hit up ___.’ But instead of a blank, Gaetz wrote a nickname for one of the recipients. (The Daily Beast is not sharing that nickname because the teenager had only turned 18 less than six months before.) When Greenberg then made his Venmo payments to these three young women, he described the money as being for ‘Tuition,’ ‘School,’ and ‘School.’"

I guess he was quite a bully in high school.

He reminds me of every stereotypical highschool bully… not even a jock. A wannabe jock who can’t make varsity because he parties too much and is too bloated with beer and fat and so he pounds on the nerds to vent his frustration and feel superior to someone.

A wannabe jock who can’t make varsity because he parties too much and is too bloated with beer and fat and so he pounds on the nerds to vent his frustration and feel superior to someone.

I dunno. It’s already been suggested above that he might have a useful role to play in baseball.

I dunno. It’s already been suggested above that he might have a useful role to play in baseball.

He also has a date rapist vibe to him. Like the kind of guy you warn your sister not to date.

A wannabe jock who can’t make varsity because he parties too much and is too bloated with beer and fat and so he pounds on the nerds to vent his frustration and feel superior to someone.

Not sure if mentioned but his dad was a wealthy politician who I guess helped him wiggle out of DUI charges.

Fun fact, not only is Baby Gaetz even better than Pizza, it’s his actual nickname!

“I feel betrayed by him,” Hill said to Hayes. “And I have to wonder about his motivations for defending me in the first place.”

I have to wonder who he was thinking of for #3, perhaps AOC?

Katie Hill on Matt Gaetz: 'I feel betrayed by him'

Gaetz not only has the cash/young girls thing and the political favors thing going on, he’s also being investigated for potentially trying to put together a sham 3rd party candidate to siphon democrat votes off.

But that’s not all! There may be stuff involving the production of fake ID’s for minors.

Investigators believe another Florida politician, Joel Greenberg, recruited women online for sex and that he introduced the women to Gaetz.

Additionally, information that may connect Gaetz to a fake ID scheme at the center of the case against Greenberg, was presented to federal investigators in a meeting early last year, according to two other people familiar with the matter.

In the meeting, which has not been previously reported, a witness provided evidence linking Gaetz to Greenberg, the former tax collector in Seminole County, Florida, who was arrested last year on charges that include sex trafficking of a minor and fabricating fake IDs.

According to one of the people familiar with the matter, an employee at the tax collector’s office saw Greenberg and Gaetz on internal office surveillance video looking through driver licenses on a weekend evening.

In a text message exchange shared with CNN that the source said was between Greenberg and the employee, Greenberg confirmed he was in the office "showing congressman Gaetz what our operation looked like."