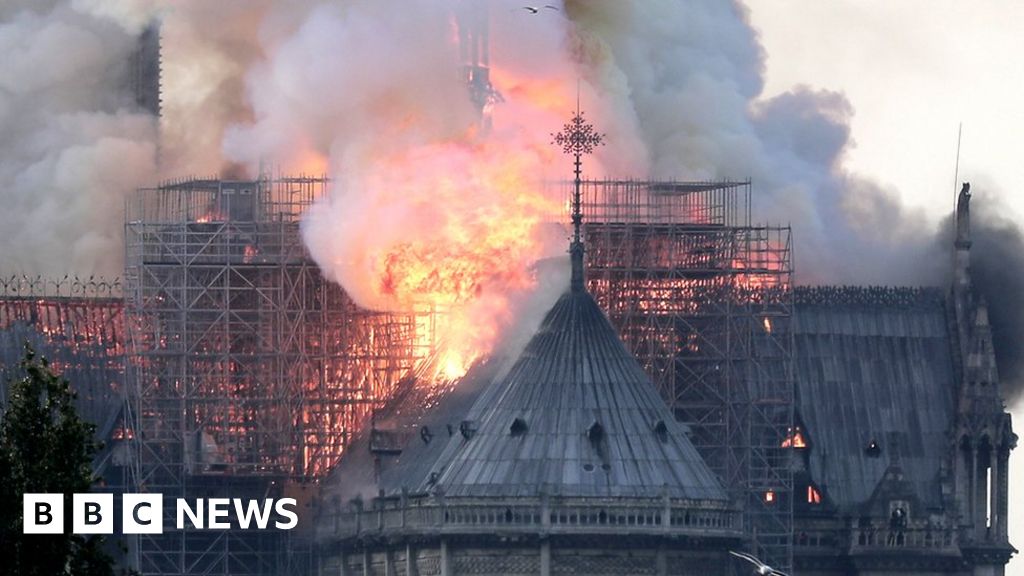 A major operation continues overnight at Paris' iconic Gothic building after the spire and roof collapsed.

The fire is pretty big.

(EDIT: fire chief in the US says the weight of water from aircraft tankers could do just as much damage as the fire itself)

also have to worry about falling embers.

Whoa it looks like the entire roof is gone.

Terrible … sigh . I guess I was lucky to have seen it a few years ago.
Seems like there have been quite a few acts of arson and vandalism directed at Churches across France recently.
Hopefully this was an accident, but the end result looks serious for such an iconic building.

Anger as France sees 10 Catholic churches attacked in ONE week - 'God will...

A SEVEN day spree of vandalism has seen Catholic churches targeted across France sparking fears of a fresh wave of anti-Christian sentiment in the country, including one church being defiled with human EXCREMENT.

Did a quick Google search on this…
Holy crap.
(no pun intended )

ND spokesman said “nothing of the (wooden) frame will remain”.

Going to take many decades to rebuild it, commentors already saying.

The authorities have already affirmed that it was a construction accident. Put that in your pipe and smoke it.

Hmmm… we must wait and see what went on . I am dismayed to see 1000’s of smiley face reactions on some of the Youtube clips. Awful… whatever one may think of the symbolism .

What are you smokin’? I just blamed it on right wing christian white supremacists as it most likely was

The authorities have already affirmed that it was a construction accident. Put that in your pipe and smoke it.

That is a misrepresentation of the facts. Why are we surprised ?

Nobody knows yet . One worker was quoted saying that it was started deliberately . The authorities have stated that they do not know, but construction work was being carried out …so that may be a reason
Quote from French Police
Police in Paris say the cause of the massive fire enveloping the spire of Notre Dame Cathedral isn’t yet known.

put your Pipe wherever you wish , just try and keep up.
I sincerely hope it was just a terrible accident .

It does not bode well for the west that we let this kind of thing happen, whether by accident, or conspiracy.

just had interview of Ken Follett, who wrote The Pillars of the Earth, a historical novel about building such a fictional cathedral in England. He researched them quite a lot.

I’ve always been waiting for the day Forbidden City explodes.

And yeah this is a really embarrassing thing to happen in a developed country.

Terrible. Feel gutted about this. What a shit thing to wake up to. Visited it in 2011. It survived World War II and ISIS terror plots, only for some incompetent restoration work to partially destroy it.

A million Uighurs in concentration camps in Xinjiang…excuse me if I don’t consider a fire in an old church an international tragedy.

The cathedral ruined by an accidental fire that somehow started in two places at the same time at night with no workers on site, from NBC:

Inside the cathedral, altar and cross are left untouched, surrounded by debris:

what did God mean by this?