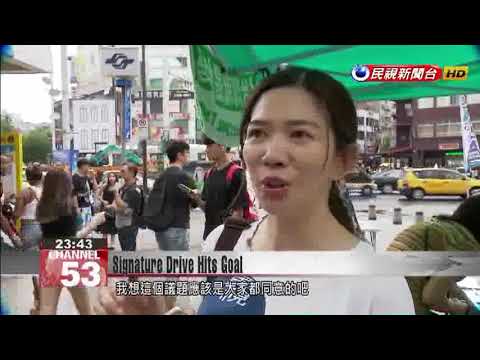 Great! What comes next?

They plan to do a referendum in November, as long as most the signatures from the petition are valid.

Is your government required, obligated, to put the question on the ballot?
If you have sufficient, valid, signatures, can it be ignored?

The procedures for running a referendum are defined in Chapter 3 of the Referendum Act:

There’s a few steps to come aside from checking the validity of the signees. There are some technical outs, but nothing that says it can be ignored. Someone else might have a better understanding.

Why is there near zero coverage in national media?

You do realize that the point of this is not actually to get the Olympic team re-named, right?

Obviously, if they actually rename the team then they won’t be able to play in the olympics at all.

However, if the referendum goes ahead, and the majority vote for changing the name to Taiwan, I believe there will be a huge shift in politics, and it could reignite Taiwan’s independence movement.

Like this referendum, that’s a lot of wishful thinking. I thought referendums were supposed to be a way to more conclusively make a controversial decision by putting it to a direct vote by the people when opinion polls may be inaccurate and elected officials may fail to represent the public will. But public opinion on this matter has never been in doubt. If it were up to the people of Taiwan, the national team would be known as Taiwan and not Chinese Taipei. It’s not up to the people of Taiwan. It’s up to a handful of people in Beijing.

There are quite a few proposals in this next election that appropriately use the updated referendum law to gauge public opinion on controversial issues (e.g. use of nuclear power, status of gay marriage, etc.). This is not one of them.

Speaking as someone who supports independence, this is beyond idiotic.

An American court ruled that the Baltimore CFL team could not call themselves, the “Colts” due to copyright infringement (there was already a defunct NFL team called the Baltimore Colts). What did the Baltimore fans do? The announcer introduced the team as “Baltimore, CFL…” and then had the fans yell “Colts!” No law can do anything about that.

Why don’t we start by having our own announcers call ourselves Taiwan, instead of Chinese Taipei? Japanese and Korean broadcasts use our real name already, for goodness sake. Now we’re jeopardizing our athlete’s opportunities to compete by demanding we are called something we don’t even call ourselves. Sometimes Taiwan makes me want to bang my head against the wall.

Given that Hong Kong is competing as Hong Kong, China 中國香港, asking for the name to be changed to Taiwan, China 中國台灣 should be a easy deal. The KMT government of 1984 purposely avoided any name including the term “Taiwan” and agreed to use Chinese Taipei so that they could conveniently abbreviate that to 中華隊 i.e. the “Chinese team”.

Sarcasm, or? Why on earth would Taiwanese want 「中國」 in the name? They don’t even want 「中華」 let alone 「國」.

Sarcasm, or? Why on earth would Taiwanese want 「中國」 in the name? They don’t even want 「中華」 let alone 「國」.

Sarcasm? That’s reality, unlike this referendum which is sitting on a whole heap of wishful thinking.

The current options are:

Anything else won’t get approved by the real decision makers in Beijing.

Zero chance for (2). (1) of course is easier as Taiwan does enjoy a good status quo. But I’m genuinely curious to see if anything interesting comes out of this referendum.

No. I do not understand your reply. A serious olympic athlete is representing his or her country. “ChungHua Taipei” is not a country. Seems clear cut to me.

Taiwan is Taiwan. I do not understand your confusion.
USA olympic teams are “Team USA”
Taiwan olympic teams should be “Team Taiwan”. Am I clear?

A true athlete competes in olympics as a representative of his or her country.
“ChungHua Taipei” is not a country.
Let’s see; that would be “UK Washington” for USA athletes.

There is nothing good about your imaginary status quo.
Xi holds the strings; He pulls and Taiwan jumps.

Do Taiwanese call themselves, “We are Chinese Taipei”