You would think that yes an Leofoo Amusement Park in Tauyuan, Taiwan is a smaller Six Flags, or Disneyland, or sumthin of the sort. Just look at the advertisements! All the happy people and park characters walking around smiling at you! So I go one weekend, and not to my surprise it was just as I expected,…and worse. The rides were terrible! I can forgive them not being up to par as in quality fun being Taiwan as it is, but I think the only risk factor that WASN’T fun was all the safeties on the rides being in bad condition and fearing whiplash the next day. The workers there in a majority, were acting as if,“I hate this job but I need to make a buck” with barely a smile or sense of welcome to the guests. One female employee actually made us sit in the non-moving ride while she watched fireworks! And a sudden realization when I left the park, there was no music playing on any of the rides or any characaters walking around. That just took the spirit out the whole trip. I’d say the most fun I had was screaming my head off in false fear just to give myself an artifical rush. So FYI Leofoo Park sure isn’t an amusement park, more of a bored-a-ment park.

According to the TV advertisements, they have lowered the admission fees at most of the resort areas and recreational parks around the island this summer. Does anyone have suggestions as to which ones are the most fun?

According to the TV advertisements, they have lowered the admission fees at most of the resort areas and recreational parks around the island this summer. Does anyone have suggestions as to which ones are the most fun?

My girlfriend and I went to LeoFoo last week and it wasn’t that bad considering that (a) We live in Hsin Chu - a 20 minute drive away, (b)got there after 5PM thus paying 1/2 the entrance fee, and ©we got to ride all the rides without waiting more than 3-4 minutes…

Window on China is a joke. Small kids will find it funny. The rest of us - No… I have heard that there is a place with pig-racing down somewhere near Zhubei, but haven’t found it yet. If you are adventurous, then try Yuemei amusement park. It has its own exit from the Sun yatsen Freeway near Taizhong. Easy to find. Will try to get the link later. I think that one is good.

Window on China is a joke. Small kids will find it funny. The rest of us… No

Yuemei amusement park? I’ve never heard of this place. What’s it like? Would it be worth travelling from Taipei to visit?

I thought Window on China was hilarious for its pathetic cheesiness. It is surely worth a look. My favorite miniatures are the CKS Airport and the oil refinery harbor.

Yuemei is known by its English name, Yamay Resort. It consists of two parks: Discovery World (Traditional amusement park) and Mala Bay (Water amusement park). Their web site is under reconstruction, but I’ve pasted the link here anyway. It is worth it if you are into water slides, roller coasters etc. You may want to do it over a weekend, so you take one park Saturday and the other one Sunday. There should be hotels nearby.

I found this post and the last one was made almost 2 years ago.Any new info,please tell all of us.

Leofoo Village still sucks. The 2-3 times I’ve been half the rides were closed. I only went cause I could get in free. I wouldn’t waste the money to go there.

The “theme park” in Wulai (up the mountain with the cable car) is nice … to look at.

I recommend Hualien Ocean Park in Hualien. I went there during Spring Break this year with my school (teachers, not kids). They have characters walking around, bumper boats, a swing boat, a small roller coaster, an aquarium, a dolphin (where you can swim with and/or feed and pet the dolphins) and sea lion show, cable cars to go to the top of the park, a log flume, etc. Lots of restaurants, including Western food, and very nice souvenirs as well. I had a decent time there despite the cold, drizzly gray weather and being there on a weekday in the off-season. Can’t imagine how much more fun it is now that it’s warm and there’s a bigger crowd.

I liked Liufu the two times I’ve been there. None of the rides were closed either time. I don’t like the zoo there and their exploitative use of endangered animals like white tigers.

The one at Wulai is really nice and well worth visiting if you’re up their. Very low key and simple.

What about Little Ding Dong? Ever since I first passed their sign on the highway coming back to Taipei I’ve wondered what exactly that is? My wife tells me it’s an amusement park.

Little Ding Dong is a science amusement park for kids. 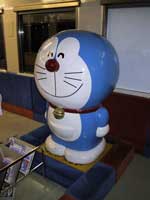 This is Xiao Ding Dong.

How did this thread get on to the topic of the contents of Stragbashers trousers again ?

Don’t forget about Formosa Waterworld, just outside of Taipei…

Janfusan fancy world was good by Taiwan standards when I went there a couple of years ago. It’s not far from Do Liu which is south of Taichung. It’s got a couple of big rides and a ferris whell which wobbles when it goes round (not an original design intention, methinks).

On the whole, it’s not too bad.