Oh, this is gonna be nasty. SCOTUS has for years now become increasingly fed up with legislating from the bench. Pass a Law or STFU seems to be the message. 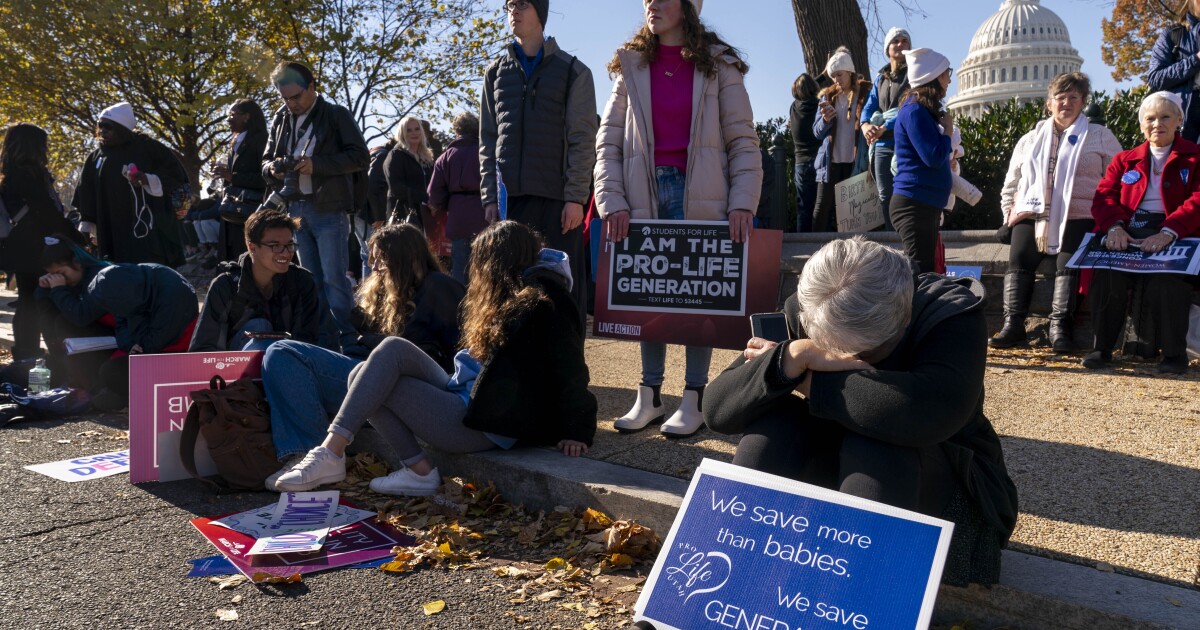 Justices in the Supreme Court's six-member conservative majority on Wednesday raised substantial doubts about the jurisprudence behind the 1973 case establishing abortion rights in the United States, Roe v. Wade, during arguments over a Mississippi...

this is gonna be nasty

Legislation without representation is the real crime. Elected representatives should be making public policy, not unelected, unaccountable judges with lifetime tenure.

It’s these kind of people that push me to the pro-life side. I am really against having the government get into my personal business, but some of these people are just gross. Abortion should be rare and not used like birth control.

The US Supreme Court is meant to be apolitical, hence the lifetime appointment that is supposed to free them of political considerations. But since FDR they have used the Supreme Court as a means of exacting political objectives by court packing.

Apolitical and also trusted because of that.

At least two Supreme Court judges have said that if the people don’t trust them, the experiment that is American democracy will fail. Why? They don’t have the power of the purse or control over the military. They are able to function on trust alone. Start making it political like a certain political party has been doing for the past 6 years and they’re just another political entity. Which they already are.

The survey of 1,696 U.S. adults, which was conducted from Nov. 17 to 19, found that equal numbers favor (39 percent) and oppose (38 percent) the Mississippi law when it is described as something “that bans most abortions after 15 weeks, or about three and a half months.” (Roe v. Wade currently prohibits states from outlawing the procedure before about 23 weeks.) A significant share of Democrats (19 percent), Black Americans (25 percent) and Hispanic Americans (29 percent) also say they support a 15-week ban. Another 23 percent of overall Americans are unsure.

You can’t lay this at any one party’s feet.

The trend has been ongoing since FDR, who is a Democrat. Fact is both sides want to pack the court because one loophole of the US constitution is that it does not say how many justices may serve on the Supreme Court, so they are free to pack as many of their own into the courts as they can.

It’s all a show. American “democracy” has already failed a long time ago, just that the people don’t want to accept or acknowledge that.

Problem is nobody in the world wants it to fail as the US is such a central pillar of the global economy that if it fails, the entire world will fail. This goes for US dollar and all that. The US hasn’t collapsed because they have the entire world pay for their mistakes.

With abortion arguments at Supreme Court, we finally have the opportunity to...

Decades of advancements in science and technology have enhanced our understanding that human life begins at conception.

And apparently, USA Today is having middle school girls opine:

We condemn from afar but where's the empathy when it comes to abortion?

Ask anyone who knows me, I love, love, love babies. Yet I also recognize not everyone should give birth or be a parent.

It dawned on me in the moment that here was yet another man who felt emboldened to try to dictate what a woman should do with their body.

Funny how there’s not a mention of the science.

It’s so easy to condemn from afar. Why isn’t it equally easy to exercise empathy?

Right, like empathy for that squirming kid in yer belly. 15 weeks is long enough. Time to grow up.

The US Supreme Court is meant to be apolitical, hence the lifetime appointment that is supposed to free them of political considerations. But since FDR they have used the Supreme Court as a means of exacting political objectives by court packing.

In Dred Scott, Lochner, and other cases going back to the founding, where the Supreme Court was used to make political rulings for one side or the other.
Roosevelt did not succeed in packing the court. He did scare them away from their accustomed role of being Gilded Age hirelings of the wealthy. You know, the good old days of the Court when the 14th and 15th Amendments, passed to protect blacks, were used to allow segregation and prohibit working hourrestriction or safety laws.

But since FDR they have used the Supreme Court as a means of exacting political objectives by court packing.

Judges have always imposed their personal ideologies during the judicial process because there’s no effective check on their ability to stray into legislative policy-making but their own sense of self-restraint. Human nature will never be up to that challenge though. The self-restraint dam burst when leftists openly embraced the concept of judicial fiat under the guise of euphemisms like “judicial activism” and the “living Constitution.”

Now that leftists have lost control of their experiment in circumventing the slow and unreliable democratic process they find themselve in danger of having their judicial activism de-activated. That’s got them crying ‘foul’ because only the Left is supposed to be able to impose its ideology via judicial fiat.

In a democracy, the only legitimate way to determine the proper balance between the competing rights of an unborn child to life and a woman’s right to control her own body is for elected representatives – in light of modern scientific findings – to determine that line. That line, being a matter of life and death, should then be enshrined in the Constitution via the only constitutional method for updating the Constitution – the amendment process.

Funny how there’s not a mention of the science.

As I understand it, “the science” is that they can feel pain, although that’s disputed. And in any case, I’m not sure it matters. The question is whether to keep the viability standard, right? And if not, what to replace it with.

For what it’s worth, I don’t think a limit around 15-weeks (with exceptions) would be particularly unreasonable. But I’d like it to be based on something clear.

But I’d like it to be based on something clear.

We’re a long way off from scientifically determining when life begins in utero so maybe the best interim legal principle for drawing the line should be adverse possession.

Adverse possession is a doctrine under which a person in possession of property owned by someone else may acquire valid title to it, so long as certain common law requirements are met, and the adverse possessor is in possession for a sufficient period of time, as defined by a statute of limitations.

An unborn child would acquire the right to remain in utero after a statute of limitations had passed and a pregnant woman had given it tacit permission to not be evicted.

Someone in Portland give you an edible gummy bear?

Drugs and ad hominems are for losers.

The cracks are showing in Roe v. Wade - The Spectator World

Undoing Roe v. Wade and returning the decisions surrounding abortion to the states is a possibility that today seems entirely within reach

Apolitical and also trusted because of that.

At least two Supreme Court judges have said that if the people don’t trust them, the experiment that is American democracy will fail. Why? They don’t have the power of the purse or control over the military. They are able to function on trust alone. Start making it political like a certain political party has been doing for the past 6 years and they’re just another political entity. Which they already are.

While it is true that the Democrats have increasingly ignored The Constitution and become political puppets, there is still hope.

IIRC, the US has the most liberal abortion laws of all nations other than China, North Korea, and Canada. Even the Mississippi law would be centrist in most of Europe. But the leftists in America will lose their shit if the Constitutional order is reestablished in the US.