For those of us who don’t like failure, we can play this game as long as we like, until we find the answer. Or, you can give up and it will tell you the answer. It uses an algorithm for semantic similarity. I gave up yesterday, with my final guess very close to the answer. I gave up at “shocking,” but the answer was “surprise.” It pays to persevere. Today took 149 guesses, but I got it!!

Each guess must be a word. Semantle will tell you how semantically similar it thinks your word is to the secret word. Unlike that other word game, it’s not about the spelling; it’s about the meaning. The similarity value comes from Word2vec. The highest possible similarity is 100 (indicating that the words are identical and you have won). The lowest in theory is -100, but in practice it’s around -34. By “semantically similar”, I mean, roughly “used in the context of similar words, in a database of news articles.”

Secret words may be any part of speech, but will always be single words. It’s tempting to think only of nouns, since that is how normal semantic word-guessing games work. Don’t get caught in the trap! Since our Word2vec data set contains some proper nouns, guesses are case-sensitive. But I removed all but lower-case words from the secret word set, and if your word matches the secret word but for case, you win anyway. So if you want to know if the word is more like nice or Nice, you can ask about both.

The “Getting close” indicator tells you how close you are --if your word is one of the 1,000 nearest normal words to the target word, the rank will be given (1000 is the target word itself). If your word is not one of the nearest 1000, you’re “cold”. (By “normal” words", I mean non-capitalized words that appears in a very large English word list; there are lots of capitalized, misspelled, or obscure words that might be close but that won’t get a ranking. Those get marked with “???”).

That was fairly interesting. Not sure I’d have the patience to play every day though…

I agree that it’s probably not going to be an everyday habit. You got it in under 100 guesses on your first try. That’s VERY good! I’ve read some bloggers say they’ve never got it and always just gave up. I think this puzzle may have a place in the rotation!

You got it in under 100 guesses on your first try. That’s VERY good! I’ve read some bloggers say they’ve * never " got it and always just gave up. I think this puzzle may have a place in the rotation!

a new way to punish myself I like it. gave it about 25 guesses before bed and then gave up lol. The closest I got was 20.3

Definitely takes perseverance. Maybe come back to it later. The more you play it the more you get the gist of how it’s done.

All that being said, I gave up also.

I ended up with “tray” as the closest word. Still unclear how exactly that links to the answer. If you want to try that as your starting word, maybe a more open-minded approach would yield better results than mine

I got a lucky 50th guess that changed the direction of the game!

I had a lucky 14th guess which was 28.06 similarity and led me towards the answer… but I still haven’t gotten it.

This is not so easy.

Here’s how close I got… 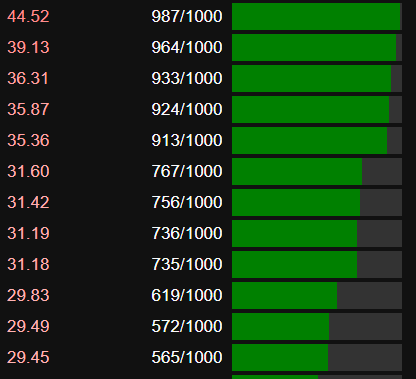 decided to try again. took bloody 200 guesses but I solved it at least.

the dark souls of word games

decided to try again. took bloody 200 guesses but I solved it at least.

the dark souls of word games

I admire your persistence.

To be honest, I’ve tried a couple times since my first and only time of fighting the answer. Is taken at least 200 guesses but each time I’ve given up. After seeing the answer, even though I have guesses that are in the top 20 or 30, it would have probably taken me a thousand guesses to have gotten to that conclusion. So, in short, congratulations!

I got my aunt playing it now. The game drives me a little bit crazy but I also like it.

Also I get it about the guessing and not getting close. Sometimes it feels intuition-based and others just dumb luck.

I’ll add though: guessing it successfully did feel like a real victory. I never felt that way playing another word game.

guessing it successfully did feel like a real victory

Absolutely! Any win is well-earned. I first came to know the game, actually, because of a blogger who said she got tired of Wordle and took this on as a challenge instead, but had never actually won a game!

Well, inspired by @strung.in I gave it a try again.

All hidden guesses were much more elegant than the actual solution.

I feel lucky, but also a bit pleased in my guessing, to have this unexpected outcome.

That is really impressive. Congratulations. I’m doing word 76 now. Got 687/1000 on guesss 23 but haven’t gotten anywhere closer in the last 50 guesses

It’s too easy to get stuck in the wrong track based on a couple of items that have some lexical similarity.

The answer to a previous one (70) was “button” (as in on a keyboard). My best guess was “platter” (which somehow brought ranked in the top few hundred). It totally led me down a path about food and tableware. Actually, I think I’ve read online that there’s a fair bit of complaint about that particular one, as the clues were fairly unhelpful.

I played this for the first time yesterday. I got to 990 before giving up. Puzzle #76. Dangerously addictive.