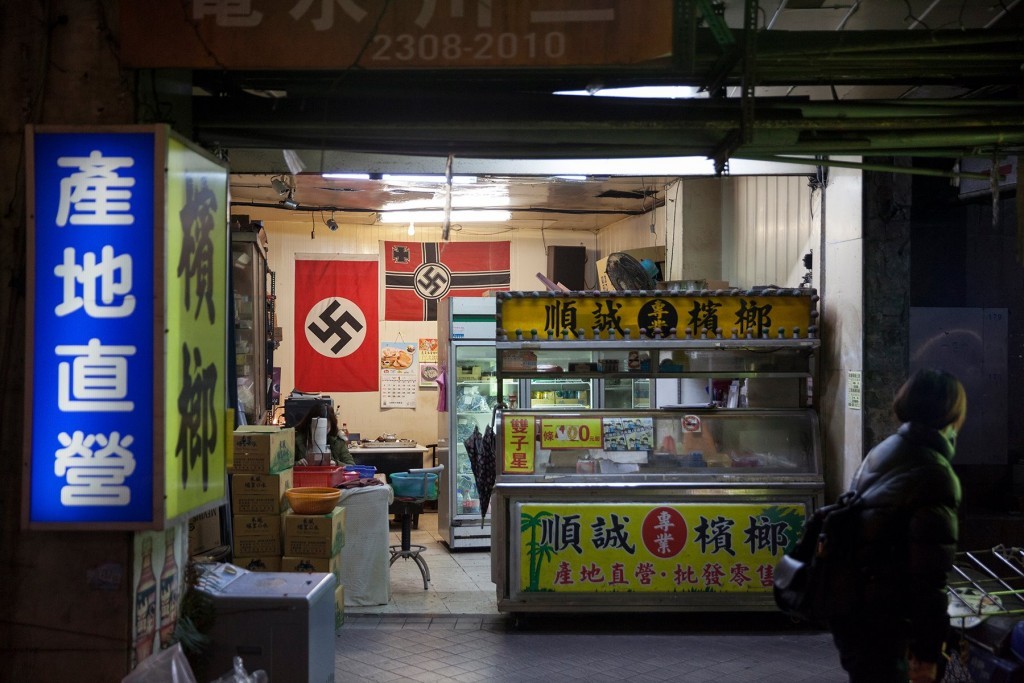 TAIPEI (Taiwan News) – In response to the controversy over photos posted of Nazi flags hung in a betel nut shop in Taipei City, The Chabad Taipei Jewish Center today issued a statement calling for the removal of the banners, while also rejecting the stereotyping of Taiwanese people.

On Jan. 6, an American photographer expressed his outrage on Instagram over Nazi flags posted in betel nut shop in Taipei’s Wanhua District, but he faced such a backlash from Taiwanese netizens that he is planning on leaving Taiwan for good. When asked by an Apple Daily reporter why he posted the Nazi flags in his store, the owner of the shop said he had no plans of taking the flags down saying, “The Nazi flag is a work of art, there is not political intent.”

In response, The Chabad Taipei Jewish Center today expressed its regret at yet another instance of Nazi paraphernalia being used in Taiwan. The document then quoted a section from Taiwan President Tsai Ing-wen’s (蔡英文) New Year’s Day speech in which she said, "In our rapidly changing world,Taiwan’s best option is to persevere on the path of democracy, and work together with like-minded people around the globe.”

The authors highlighted the commendable emphasis Taiwanese society has placed on human rights, and reasoned that because “the first step to protecting human rights is to respect others,” the betel nut store owners should also respect the Jewish victims of the Nazis and remove the banners.

The organization thanked the photographer for bringing attention to the use of the Nazi symbols, however, because they believe that “communication, understanding and acceptance are the basis for cross cultural understanding,” they “reject the stereotyping of the people of Taiwan.” The statement advised that some of the critical generalizations made by the photographer about Taiwanese society could “only create further mis-understanding and hate.”

In closing, the authors drew a parallel to the ongoing work for transitional justice among repressed Taiwanese groups and the Jewish community, and emphasized their desire to work in unison across cultures and religions to contribute to Taiwan’s prosperity, democracy, and freedoms.

Germany’s Federal Foreign Office also responded to the controversy by citing a German diplomat in the Foreign Ministry as saying:

“Using Nazi symbols is a despicable act of offense against the victims of the Holocaust. We call upon everybody using Nazi signs to immediately remove those symbols.”

The following is the complete statement issued by the The Chabad Taipei Jewish Center:

In recent years this association has repeatedly issued public statements to
condemn the use in Taiwan of the Nazi flag which symbolizes the murderous
Nazi regime, as such use is extraordinarily hurtful to the Jewish people. We
regret to see yet another incident of the use in Taiwan of the Nazi swastika,
regardless of whether it is used by stores as decoration, worn by young people,
or in political paraphernalia.

On New Years Day, President Tsai Ing-wen said “In our rapidly changing world,
Taiwan’s best option is to persevere on the path of democracy, and work together
with like-minded people around the globe.” The high value that the people of
Taiwan put on human rights and democracy has attracted worldwide attention,
and the first step to the protecting human rights is to respect others. Accordingly,
we call on the Wanhua store owners who display the Nazi flag to understand
that even if no ill will is intended, their display of the Nazi flag is an
extraordinarily disrespectful act towards the Jewish victims of the Nazis and
towards human rights in general.

With regard to the American individual who criticized the people of Taiwan,
while we thank him for bringing this matter to the public’s attention, we believe
communication, understanding and acceptance are the basis for cross cultural
understanding, and thus we reject any stereotyping of the people of Taiwan and
his comments on social media reported in the press such as “Taiwan still didn’t
get the memo about what has happened in past history. Absolute cluelessness.”
Such words can only create further mis-understanding and hate.

In recent years Taiwan has worked hard to bring about transitional justice and
unity across ethnic groups, and Taiwan is generally accepting of and open to
different cultures and religions. We, along with our members who are long term
residents of Taiwan and work to contribute to Taiwan’s prosperity, our thankful
for this. We hope that we can all respect our differences while working together
to safeguard Taiwan’s democracy and freedoms.

These morons. No wonder pieces of shit like Han Guo-yu were elected.

Who? The Jews? The lady with the Nazi flag? Nazis in general ? The foreigner? All of them?

These morons. No wonder pieces of shit like Han Guo-yu were elected.

It’s good that @mad_masala has had a hand in bringing all this to light.

I thought Forumosa was against revealing real life identities…

Your Forumosa nickname will be forever indexed on Google along with the Nazi flag.
A few years from now this whole thing will bring me a lot of joy.

“What did mad_masala mean by that?”
“Yeah, we all knew his secret hobby was to travel the world and take photos of Nazi symbols”

Who? The Jews? The lady with the Nazi flag? Nazis in general ? The foreigner? All of them?

The idiot with the Nazi flag and the netizens of course

I have a picture of a Nazi flag being sold in a Panchiou “upmarket” department store from about two years ago. The vendor closed anyway. Isn’t that kind of more controversial than at a Betel Nut Stand? The store said it sold flags from all countries and that one was the "German " one. I really believe the sales clerk had no idea. I didn’t think it was a huge deal as I guess most people in the west would not know the difference between say the Japanese imperial “Rising Sun” flag and the present day Japanese flag. It is possible to buy Nazi flags in the UK but the shops selling them tend to get bricks or fire bombs thrown at them. I would guess it’s not illegal in the USA to sell those flags either. Isn’t the so called “Confederate Battle Flag” still flown over some US government buildings. And what about the Duke’s of Hazzard show didn’t the car in that have the Dixie Flag on it ?

My eye is burning!

These people who display these or sell them probably have no idea what they represent as do most of the people on the island.
Thus virtue signalling from groups frothing at the mouth is ridiculous.

If it is not illegal, should any group have the right they take them down or stop selling?

It’ll be interesting to see if they cave or not.

I think that if it is legal for people to wave the chinese communist flag in Taiwan, then I don’t see a compelling case about other flags.

it should be illegal to be so ignorant that you think displaying nazi flags is 1. cool and 2. is ok because you didn’t plan to offend anyone and were too stupid to know /or be educated about one of the most horrific events in history.

Thus virtue signalling from groups frothing at the mouth is ridiculous.

Sorry, but I have to respectfully disagree. While many don’t really understand just how offensive these symbols are to some, having grown up in a household where my next door neighbor was a survivor of Auschwitz and in a heavily Jewish neighborhood where many families were affected, I do and find these incredibly offensive.

This is not virtue signalling at all. This is true disgust, true revulsion and 100% offensive.

These are symbols and a reminder to many of an absolute travesty of almost unimaginable and immeasurable suffering and sadness that was inflicted on humanity. The younger generation seems to throw the word “Nazi” around like it’s a joke, unfortunately for many of us, we have plenty of first hand encounters with people who have suffered and still grieve.

they tried to cover up when you asked them i guess. they were not selling flags, the flags were decoration of the store(it was a clothes store). which was called SS-3. so they basically knew what they were doing, using nazi flags and a nazi theme for their store. at least they changed it after the bad press unlike these other dick heads.

they tried to cover up when you asked them i guess. they were not selling flags, the flags were decoration of the store(it was a clothes store). which was called SS-3. so they basically knew what they were doing, using nazi flags and a nazi theme for their store. at least they changed it after the bad press unlike these other dick heads.

Yeah the store owner obviously did know then if that was the name of the store, (as I didn’t notice the name). The girl I asked was probably just the clerk and I just chatted to her casually about the flags, not in an aggressive manner pointing out that wasn’t the German flag. However, you could be right, she might of been told just to play dumb if asked about it. I guess some of you would like to see the pic. Here is one I took. I have one more but I won’t show it as it has people in it.