The narratives about Antifa thread

Before it’s down the memory hole, certain segments of the media were for them before they were against them:

“Their idea is, ‘look, non-violence hasn’t worked, we are going to try to stop this.'”

During a section discussing the aftermath of Trump meeting with Senator Tim Scott and his yet again playing his “Both sides” game with a side dose of “Antifa are bad dudes” we get the usually back and forth generally condemning violence from...

Me, I always said they were the real basket of deplorables. And the medium IS the message. Their medium is violence. No, they never were really anti-fascist. That was just an Orwellianism. They ARE the fascists.

Gradually, painfully, the mainstream is coming closer to this point of view, because the old narrative is getting awfully frayed at the edges. But they’ve got a hell of a long way to walk back. And they’ll try to make it easier on themselves by minimizing their past support. Don’t let them off the hook that easily.

Emerging narrative: they’re a marginal group, so it’s no big deal, hey? Well, they’re only marginal after you marginalize them. And come to think of it, these links I just easily unearthed are not that old yet. When did the administration declare them a terrorist organization again?

(For those tuning in late: this thread is an offshoot of another thread that went off topic getting into this Antifa stuff. I address that thread going off topic by starting a new thread for the new line of - er- discussion. This is the second time I’ve done so for the very same original thread, which now well into the high hundreds.)

Me, I always said they were the real basket of deplorables.

No, actually, you didn’t.

You had a whole thread about deplorability, remember?

Well, every once in a while I see a story about some poor Trump supporter being publicly assaulted, and I wonder if it belongs in the Thug Culture thread. Here’s the latest one of those other things: We must stand firmly against such intolerance. Right? Oh, and that Cetin guy may have been kidding when he supported Hillary. Never can tell.

Fifty-four posts in, you mentioned them once:

I’m not all that impressed with ANTIFA. This looks like a replay of the sixties, but not the eighteen-sixties.

Yes, they’re violent extremists. But they don’t have what it takes to pull off a forceful overthrow of the government. It’s more of an extreme form of acting out. These are mostly entitled white assholes with way too much self esteem for their own good, and delusions of Bolshevism. Shoot a few, throw the rest in prison, and it’ll be over. At least for another fifty years or so.

Now the Trumpistas… if you want to compare them to the Confederates, you’re on firmer ground. Or if you dare, to the American Revolutionaries.

And the medium IS the message.

a question in general to rowland. what’s up with all those a (non-sense) narrative threads about this and that in a forum mainly regarding taiwan. i know they’re posted in the international politics sector, so that’s that. but you clearly have an agenda or taiwan just bores the heck out of you(if you even live here). anyways, spend more time looking after your real life and less on some (insignificant) tw expat forum trying to convince people that all the fake news you linked here is actually true…

Hey, someone has to spread the gospel of Covfefism to every corner of the world, right?

Btw if you really don’t want to read Rollo’s posts, there’s an ignore button somewhere… Let us know in Feedback if you have trouble getting it to work.

Hey, someone has to spread the gospel of Covfefism to every corner of the world, right?

Btw if you really don’t want to read Rollo’s posts, there’s an ignore button somewhere… Let us know in Feedback if you have trouble getting it to work.

ahh, the holy covfefe…i’ve heard there are still people waiting for it/him/her*

thanks for the suggestion, i actually wanted to that but was unable to find it, does it ignore all of a user’s threads or just specific posts?anyways, where can i find that button? i really want to push that button!!

What is the "Add foe" function? Site Feedback

Is this to prevent one from seeing a certain user’s posts, or to prevent the user from PMing you, or…? I’m hoping it’s the first. Thanks.

I’m going to give my uninformed opinion without reading a word of this. Apparently, that’s the way to participate in a politics thread here, especially if it’s about a country different from your own.

Antifascists, being a peaceful movement as the name indicates, are being oppressed by a fascist who instead of a moustache has a mop on his head. The situation is especially painful if you consider all the money these poor antifascist get stolen by the fascist central government, which uses it only for oppressing even further the pacifists.

A post was split to a new topic: A bit too colorful

does that still work? when i clicked on that add foe link, i was forwarded to the old forumosa, everything seemed to work but the last threads were all from mid 2016 and i can still see everything…

i don’t know you and i didn’t even read your postswinkwink maybe but just maybe, if we do that long enough, the troll shuts the heck up(since that foe list isn’t working for me)

I thought that wasn’t a function on this new forum.

I thought that wasn’t a function on this new forum.

yeah, it’s not working on the new version. admins should really look for a solution for that, until that time i’ll spam every obvious troll thread

Ah, the most you can do now is suppress notifications. I never tried it out because I’m too opened minded.

Will we ever get our foe function back? @discobot fortune

My sources say no

What the hell is happening in Portland? It used to be a fantastic city to live in and visit but when I was last in the area, nearly everybody warned against going downtown. Do the police not show up? Hell, what about having the National Guard come in and shut things down?

Violence has broken out on the streets of Portland this afternoon as Antifa and right-wing groups came face-to-face, with Antifa assaulting numerous people.

@discobot display help . Every time a contentious issue appears , some robotic ( or alien) influencers descend with words of propaganda to diffuse the situation . Should they be banned from the forum for these heinous activities , or should we be grateful ? 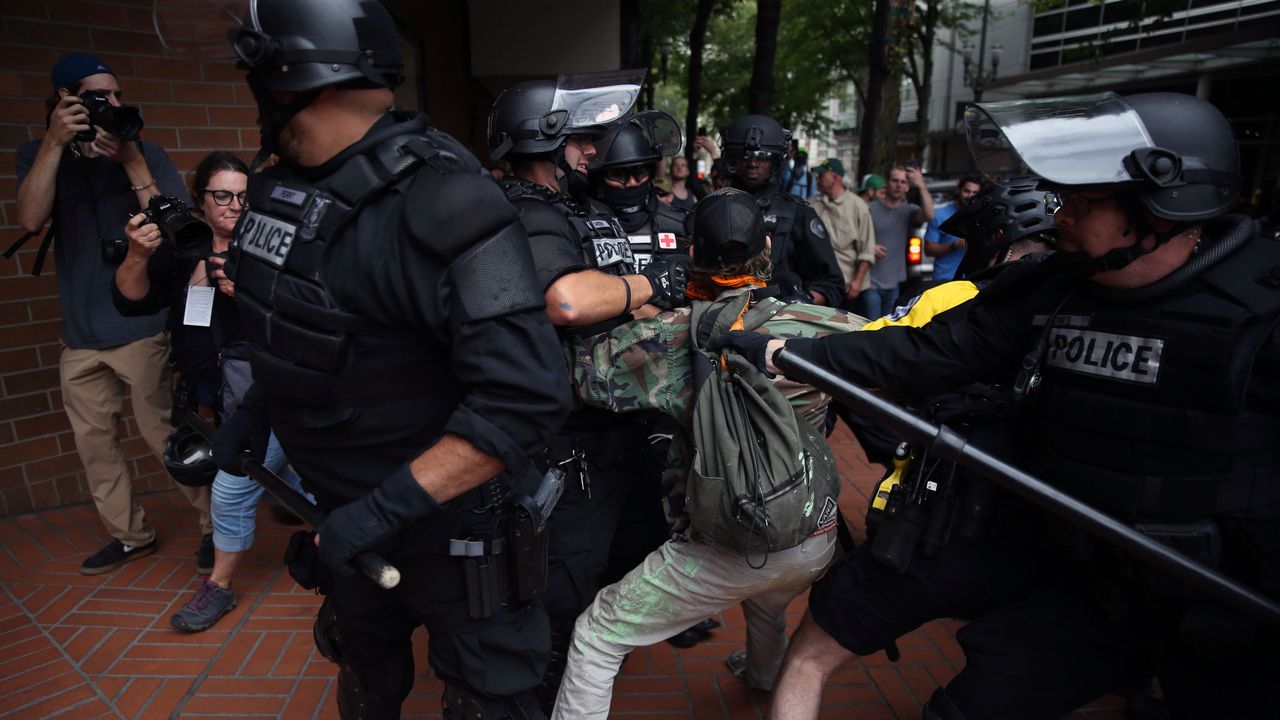 The right promised to rally to "End Domestic Terrorism." The left vowed to be there.

has timeline of events, etc.

OK, I watched a press conference from the Portland Police and they appear to intend to do…something but don’t appear to differentiate between a person out shopping for morning produce and a person who hits the shopper on the head. Basically, they are saying ‘if everybody stays inside then nobody will have anybody else to hit with hammers’ which…is sort of sad to hear police say but they really did sound overwhelmed.

This is a sad situation. I lived outside of Portland for nearly a year and it was a very left-leaning city but in all the best ways. Public transport that (sort of) worked. Cool, small local shops. Bike lanes. Organic produce before anybody was concerned about such things. They did have a good deal of economic segregation divided along racial lines but that doesn’t appear to be the problem here.

So who are they baddies there? The ones with the masks and weaponry or the ones waving the U.S. flags? It’s hard to tell.