Your official document from Taiwan may write important numbers, such as the birth date, in a complex form of Chinese. This is sometimes referred to as bank numbers. This system is used to make it difficult for people to alter numbers.
I am providing a webpage that has the translation. http://blog.sina.com.tw/loveshare/article.php?entryid=630605

https://www.sohu.com/a/118818823_450604 The post above shows an image that tries to hide the Arabic numbers inside the Chinese characters. 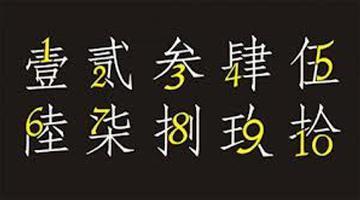 The post above shows an image that tries to hide the Arabic numbers inside the Chinese characters.

That’s pretty clever, although 2 is bit of a stretch.

My problem isn’t recognizing which numbers they are when I see them, it’s trying to remember how to write them if needed. Fortunately I’ve noticed that banks often provide a list of these at the counters or on the forms themselves. Apparently native-speakers need help as well!

I knew these existed, but I didn’t know any of them besides 1 and 2. Does anyone know why it’s these particular characters? I wonder if they were chosen because the characters already existed as homophones or close enough approximations in some Chinese language, or if the character itself looked similar to the numeral character (e.g. the bottom of 參 has three horizontal lines, like 三), or if these were invented for this specific purpose. Also, if the point is mainly to make them harder to alter into other numbers, then do you really need special characters for 四、五、九、百？ I feel like they’re unique as-is and I can’t think of a way to add lines and make them into other characters.

Paging @hansioux if you have any wisdom to share?

This is an example of how complicated the writing system is: it is not just to convey meaning, it is also a fraud-prevention system.

Chinese numerals are words and characters used to denote numbers in Chinese. Today, speakers of Chinese use three written numeral systems: the system of Arabic numerals used worldwide, and two indigenous systems. The more familiar indigenous system is based on Chinese characters that correspond to numerals in the spoken language. These are shared with other languages of the Chinese cultural sphere such as Japanese, Korean and Vietnamese. Most people and institutions in China and Taiwan primarily...

壹 and 貳 have been around for a long time. 貳 for example can be found in I Ching (易經), first written around 1000–750 BC, as 樽酒簋貳 (a pitcher of wine to go with two dishes). The character also repeatedly showed up in other Zhou dynasty texts meaning 2.

壹 can also be found in Zhou dynasty texts, but showed up much later than 貳.

The rest probably did come much later. Most of them are repurposed from other similar sounding words.

I often make the mistake of writing it as 抬

That’s interesting that the banks provide the lists. I guess it’s like writing one hundred on a check in the U.S. except the words are easy to spell.

Thank you very much for your link to https://en.m.wikipedia.org/wiki/Chinese_numerals I had been very confused because the numbers on my document did not match the 大寫 numbers. I thought maybe they had become blurred over the years. Now I see that my document uses the obsolete forms.

Thank you very much for the detailed history of the bank numbers.

That is indeed an easy mistake to make.

or if the character itself looked similar to the numeral character (e.g. the bottom of 參 has three horizontal lines, like 三), or if these were invented for this specific purpose.

Yes, sorry, I meant ‘maybe they chose already existing characters for a variety of reasons, or maybe they invented these characters specifically to be harder to write for accounting/finance/writing checks etc.’

These damn characters get me every time. When at the bank, in recent years, they wont help you write them…even playing the blue eyed foreign idiot card. So now the clerk points to the police officer near the door. That bored guy always helps write these crazy numbers, saves everyone an hour. Amazing how few locals even know how to write them…which is always my face saving excuse getting the rent a cop to help me. So bad, on all fronts

They don’t have a chart taped to the counter or something that you can copy from? Every bank in the Sinosphere should have those.

They do, but bankers are always in a constant raging hormonal i mbalance, so they just yell at me to go to the cop haha.

When at the bank, in recent years, they wont help you write them…even playing the blue eyed foreign idiot card. So now the clerk points to the police officer near the door.

Many banks have ‘service’ staff to help people.