Who put the K in 高雄 (Kaohsiung)

Today I met a foreigner. I hardly know what they look like anymore. Almost none live in my area.
Anyway, he mentioned a place called (COW Shung) Kaohsiung.

At least in my circle, we’ve always ignored the K of the name and pronounced it with the G. But then again, the only foreigners I know and see every day is me. so I don’t know. ICRT pronounces it with a G as well.
So, here is the question. Who is the fool that put the K in the G spot for Gaohsiung. “Taibei”, “Taipei” No problem people often confuse p and b. But K and G, impossible. It doesn’t even sound remotely alike.

Who is the fool that put the K in the G spot for Gaohsiung. “Taibei”, "Taipei Sir Thomas Francis Wade GCMG KCB (25 August 1818 – 31 July 1895), was a British diplomat and sinologist who produced an early Chinese textbook in English, in 1867, that was later amended, extended and converted into the Wade-Giles romanization system for Mandarin Chinese by Herbert Giles in 1892. He was the first professor of Chinese at Cambridge University. Born in London, he was the elder son of Colonel Thomas Wade, CB,:466n of the Black Watch and Anne Smythe (daughter of William Smythe) of...

At least part of the reason is that pronunciations in Chinese have changed, much like the great vowel shift, but affecting consonants. they have the p - b, r - n, k - g, h - f type thing going on all over the shop.

Similar to when I lived in South Korea. Their port city is spelled “Pusan” or “Busan” depending on who you ask.

At least part of the reason is that pronunciations in Chinese have changed, much like the great vowel shift, but affecting consonants. they have the p - b, r - n, k - g, h - f type thing going on all over the shop.

Is this a thing? Really? The change in pronunciation of major words and the “great vowel shift”. I’d love to learn more. Any entertaining history books or essays talking about this. I really want to learn more.

Yea it is, Cantonese and Min tend to be closer to earlier pronunciations. Look at Japan - Ri Ben - j to r and p to b. Beijing - Peking p to b and k to j. Xiang Gang - Hong Kong g to k.

I read that its linked to a pronunciation shift in Mandarin. Like the shift that English had in the vowels. I don’t know much about it but you can read up on it even on wikipedia. Ive often heard people swap l - n, and h - f in particular. Those letters might sound like totally different sounds to me, but not to some Chinese speakers apparently.

Time to get rid of Wade-Giles leftovers once and for all.

I think Wade was based in Tamshui for a while.
(Edit- it was his partner in crime, Giles)

Shake my fist everytime I pass the fort.

Hyphens and apostrophes God knows where.
I always liked the TS innovation though.

I think the original idea was that you wouldn’t confuse it for the actual English pronounciation as you were meant to learn the Wade pronounciation and this would instill in you the difference.

i thought hong kongs name was based off the cantonese? which sounds pretty close to hong kong…

what you are saying sounds pretty interesting, surely there is some old mandarin audio recordings on youtube?

Mr Giles would be able to give you the answer back in the day you could have popped down to Tamshui and had a nice oolong tea and enjoy the view. 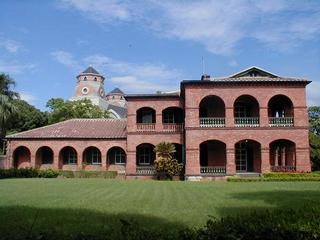 Christmas in Taiwan VIII - The Old British Consulate at Danshui

Apologies for a longish post but then this blog is somewhat of a personal aide memoir . The good news is that this is the las...

However, the most famous Consul was Herbert Allen Giles who was Consul in 1886 after serving at Pagoda Island and Shanghai. He was the son of the noted translator JA Giles. After his diplomatic career Giles became the second professor of Chinese at Cambridge, succeeding Thomas Wade. The two worked closely and developed what every student of Chinese knows only too well – The Wade-Giles system of romanisation of Chinese, the system that preceded the more common pinyin.

PS - I must look up where this Pagoda Island is…

Yea it is, and Japan and Peking are based on Min. But they thing that Cantonese and Min are more conservative and that it was K and P back in the day in Mandarin too. One of the ways they tell these kinds of things is comparing between dialects and checking which character rhymed with what in old texts.

I am just gonna double down here…in my city, there are 3 different transliterations…each of them “official.”

And on many street signs, there are different transliterations for the exact same word. Guangming, a few blocks later will say “Kwangming”. Hsinchu and Xinzhu. (I like the H one better for some reason)

AFAIU, the reason commie-style pinyin never really took off here is due to politics. I love that it is different from those people on the otherside of the Straits. It helps reinforce a separate identity. Hey, there is a difference in UK/US spelling (and we can argue all night which is correct). But, they just need to unify it on the Island.

i would be curious to here any audio though, i am leaning more towards wade giles just being a shitty system at this point. the city names in taiwanese don’t sound anything like the wade giles city names either.

Gotta tell those bureaucrats in Peiping where to get off.

Romanization has been a mess since forever:

Postal romanization was a system of transliterating Chinese place names developed by the Imperial Post Office of China in the early 1900s. The system was in common use until the 1980s, when it was largely replaced by Hanyu Pinyin. For major cities and other places that already had widely accepted European names, traditional spellings were retained. With regard to other place names, the post office revised policy several times. Spellings given could reflect the local pronunciation, Nanjing pronun...

…and it probably always will be.

There is that too. Strangely enough if you look at the international standard phonemes they also give t for d and k for g etc in mandarin. Its real messed up. This article summarizes the phonology (the sound system, or in more general terms, the pronunciation) of Standard Chinese (Standard Mandarin). Standard Chinese is based on the Beijing dialect of Mandarin. Actual production varies widely among speakers, as they inadvertently introduce elements of their native dialects (although television and radio announcers are chosen for their pronunciation accuracy and standard accent). Elements of the sound system include not only the segments – the vowels a...

Why the everlasting fuck are you writing Tamshui? Tam is Taiwanese, shui is Mandarin. So Tamsui in Taiwanese, or Danshui in Mandarin. If we start mixing up dialects in our pinyin the game’s up for sure.

I’m referring to local spelling usage. My own possibly.

KMT put the K in Kaohsiung, before the KMT occupation, the place was always called Takao. It was called Takao by the local Aboriginals, and the Dutch recorded it as such back in 1624.

It was the KMT who insisted calling Kaohsiung based on the Mandarin reading of the Japanese transliteration.

If they even bothered to learn about Taiwan’s history, or have a tiny bit of respect for the locals, they would have renamed the place to 大高, thus keep the city’s name the same as before in both Mandarin, Taigi, and Hakka.

No, in Wade-Giles it’s Tanshui.