Why do so many Texas mommies murder their children?

If you don’t want to read troubling accounts of wackos doing depraved acts to innocent children, read no further. Here’s the latest from Texas:

(1)[quote]HUDSON OAKS, Texas (AP) – A young mother who may have been depressed apparently hanged three of her small daughters and herself in a closet using pieces of clothing and sashes, authorities said Tuesday.

A fourth child, an 8-month-old daughter, was also found dangling in the closet but was rescued from the family’s mobile home.

The woman was identified as Gilberta Estrada, 25. Authorities did not immediately identify the children, ages 5, 3 and 2. . .[/quote]

When I read that I immediately thought, oh jeezus, not again. And sure enough, the article continues. . . .

[quote]Texas has seen a number of child killings by mothers in recent years.

(2) Less than five years earlier, another Hudson Oaks family was torn apart when Dee Etta Perez, 39, shot her three children, ages 4, 9 and 10, before killing herself.

(3) Andrea Yates drowned her five children in the family’s Houston bathtub in 2001.

(4) In 2003, Deanna Laney beat her two young sons to death with stones in East Texas, and

(5) Lisa Ann Diaz drowned her daughters in a Plano bathtub.

(6) Dena Schlosser fatally severed her 10-month-old daughter’s arms with a kitchen knife in 2004.

All four of those women were found innocent by reason of insanity. Yates initially was convicted of capital murder, but that verdict was overturned on appeal.[/quote]
nytimes.com/aponline/us/AP-C … illed.html

What is it about Texas that results in so many tragic acts of that nature?

Honestly, I don’t mean this as a mere dig at Christians or Republicans. Doesn’t there seem to be a problem in Texas? What’s the cause/causes?

[quote]The woman was identified as Gilberta Estrada,
25
. Authorities did not immediately identify the children, ages 5, 3 and 2 (and 8 months)[/quote]

Condoms? Get with the times, JDS. We all know abstinence is the only real solution. Sex is evil, don’t you know?

Here are two websites on point. As an ex-Public Defender I have two horror stories about baby murders. I gotta take off to teach right now so I will save the sad gruesome stories for later.

[quote]The woman was identified as Gilberta Estrada,
25
. Authorities did not immediately identify the children, ages 5, 3 and 2 (and 8 months)[/quote]

True. Four kids would be hard for anyone to handle, especially at such a young age. But why Texas, over and over? Wouldn’t you think many sociologists and criminoligists are trying to figure that out right now – what these crimes have in common, whether there’s some particular reason/reasons why there seems to be a cluster of these crimes in Texas, and what can be done about the situation. 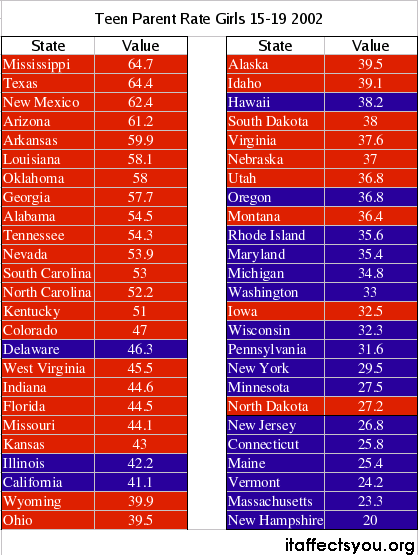 Everything is bigger in Texas… including the darkness of their souls.

And, the same goes for crime. I’m not suggesting being Democrat is good and being Republican is bad. I believe it’s more about culture than politics, but clearly the Red states have many serious crime and social problems and Texas, being about as Red as they get, is plagued with more than its share. Certainly, Texas seems to lead the nation in crazy mommy family massacres.

It seems obvious to me that there must be a link/links between these problems. I look forward to hearing Brian Kennedy’s further report.

If you will look about half the names are Spanish. Which means Mexican in Texas. Which means no birth control. So they don’t really have a choice in having many children. Also the current story you say “mobile home” which means “impoverished”.
That and Texas makes Taiwan look temperate. You deal with a Texas summer and tell me if you are sane afterwards.

Why do Texas moms kill their young?
They know that if they don’t do it, the State will.

[quote=“Enigma”]Why do Texas moms kill their young?
They know that if they don’t do it, the State will.[/quote]

Could be. With more than a third of all US executions since 1976, Texas is far and away the leading state in US executions. Texas executed 393 people in that period, four times more than second-place Virginia, which killed 98.
deathpenaltyinfo.org/article … =8&did=186

For some reason more conservative, more religious and more republicans also coincide with the above, but as I said before, I don’t know whether that’s a cause, effect or mere coincidence.

For some reason more conservative, more religious and more republicans also coincide with the above,[/b] but as I said before, I don’t know whether that’s a cause, effect or mere coincidence.[/quote]
And this boy paid good money to learn logic like that…

Which part of that do you deny?

Don’t those various characteristics tend to coincide in certain geographic regions (eg., the South and the central portion) of the US?

Also, doesn’t Texas seem to have more than its fair share of mothers going wacko and murdering all their children? Why do you think that is?

Don’t those various characteristics tend to coincide in certain geographic regions (eg., the South and the central portion) of the US?

Also, doesn’t Texas seem to have more than its fair share of mothers going wacko and murdering all their children? Why do you think that is?[/quote]

I guess that depends on how common these weird mommy murders are in other states. It does seem like all of the recent cases I’ve read about in the news occured in Texas, but that doesn’t mean these murders aren’t happening in other places as well and just aren’t getting as much coverage. But in any case I don’t think a handful of cases is really statistically significant for any kind of sociological analysis.

Not to derail this thread, but what the jeepers is going on in DC?

Also, doesn’t Texas seem to have more than its fair share of mothers going wacko and murdering all their children? Why do you think that is?

There are mothers to dump their kids in the garbage, wanna be mothers who cut the fetus out of a pregnant woman, beat kids, abuse kids, put babies in the microwave…they ain’t all in Texas.

[quote=“Mother Theresa”]
What is it about Texas that results in so many tragic acts of that nature?[/quote]

Let me see if I can answer these questions, as a man born and raised in Texas.

So hot and dry and sterile that just about anyone would go nuts?

Texas is a big place with a variety of ecologies. We have desert and mountains in the west and southwest,

grassy plains in the north, swamps and bayous in the east,

beaches in the southeast,

and forests and plains in the south.

There are riverine systems throughout Texas, including the Colorado River and its tributaries,

and an abundance of fauna and flora suited to Texas’ multiple ecologies (not going to post up hundreds of pictures, just use your imagination, or better yet, visit Texas and see). Texas is anything but sterile. It’s booming with life.

Such a macho enviroment, where men are more likely to abuse their women?

Texas does have a macho culture, but it is far from socially acceptable to abuse women. Pull your head out of that dark place Mr. Contortionist.

Such a culture of guns and death (license plates should read “the Death Penalty State”) that murder/suicide seems a reasonable option to post-partum women.

You can’t possibly be so dense, biased, and stupid to believe that Texans consider infanticide a reasonable option. All or most of those women got off on the insanity plea, right? Which is invoked in 1% of all murder trials nationwide and succeeds less than half the time, right? These women proved to tough Texas juries that, due to severe mental impairment (first test), they were incapable of understanding right from wrong (second test). I’d hardly say these women can be classed as normal Texans. They proved to conservative, traditionally skeptical juries that they are anything but.

Such extreme Christianity that some women are driven to bizarre pseudo-religious fantasies and hearing of voices (at least one of the above women was reportedly a “very devote Christian.”)

Maybe, but those beliefs would be far outside of mainstream Texan religion.

Conservatives and Republicans = lack of adequate resources and support for women, children and the mentally ill

In Texas, all children whose parents do not qualify for Medicaid, but can still not afford health insurance for their children, receive it from the State through the Children’s Health Insurance Program (CHIP). Educate yourself.

Illegal immigration, of course. It’s not our fault, it’s the immigrants.

I was wondering when you were going to play the race card. Classic liberal bullshit. Ordinary Texans do not blame the problems of Texas on illegal immigrants, as ordinary Texans remain blissfully unaware that Texas has any problems. Texans believe they live in the greatest state in the country and the world, and woe to any candidate who does not pay homage to the Great State of Texas when on the trail and in office. When I was studying government (that is, political science) at the University of Texas, I knew several people involved in grassroots campaigns in Texas (for both parties as well as non-partisan organizations). A common frustration among them was the blind, ignorant pride Texans display for their state that hinders rationale discussion on solutions. Texas indeed has very high crime, poverty, and illiteracy rates compared to other American states. But it’s far from the hot, lifeless dustbowl filled with macho baby-killing uber-religious maniacs you seem to think it is.

I already pointed out that half the names on the list were Spanish names. But I don’t think that blaming illegal immigration is in order. Especially in Texas where half of what makes our culture so beautiful is the Spanish/ Mexican influence. The Mexican woman are more likely to be Catholic (no birth control) and poor. That is about the only correlation between immigration and this issue.

G.B.H. -
Thanks for your post.
That boy is as full of wind as a corn eatin’ horse.

Not to derail this thread, but what the jeepers is going on in DC?

It’s one of the tougher cities in the U.S, and all of the massive suburban areas that would normally dilute the crime figures don’t in this case because they are in Maryland and Virginia. A better comparison would be individual cities, like Baltimore, Philly, Chicago, etc.

As for the Texas mommie problem, I’m seeing a lot of alleged characteristics of Texas, but I’m not seeing that much correlation, much less actual causation. Why not just blame it on the fact that Texas has more Armadillos than any other state…