It’s not like they didn’t know it was dangerous. I think we can probably draw the line at creating new ones. Figure it out somehow else, people of science

Yeah, I fail to see how recreating smallpox or the bubonic plague is worth the risk.

I think in the 70s in the UK, a lab nearly leaked out smallpox after a researcher fell ill. And I think a lab in America was storing smallpox in a bog standard fridge.

Just leave it alone. There’s way too many idiots around to be trusted with experimenting on deadly viruses.

I actually get why they want to study a virus or develop a vaccine for a yet to be discovered virus but it is not as you say without risks. Which is why I get why Obama shut the program down in the US (mostly anyway) I am less sure why he reversed that decision just before leaving office.

A lot of what annoys me is the covering up and misdirection, China was locking down it’s own cities in mid January and by the last week of January had shut all flights internally from WuHan, yet continually pushed the WHO to claim there was no pandemic and anyone shutting international travel was over reacting. That’s one aspect which is bad.

The other which I noticed today was Matt Gates talking to Chris Wray. This is worth watching up till about the 1.05 mark. 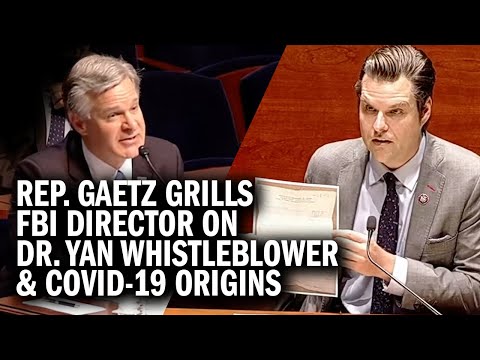 The woman he is talking about is Dr Li-Meng Yan, I’d seen her on some talk shows but didn’t know she handed over text messages between herself and the head of the CDC in China that seemed to indicated they were discussing the military involvement in development of Coronavirus in WuHan lab as far back as December 2019. Wray seems to brush Gaetz off though.

And I think a lab in America was storing smallpox in a bog standard fridge.

nothing wrong with that if the fridge itself is well contained. well, most long term storage would be done in a freezer, so maybe it was a standard house hold freezer. how exactly does that differ from a research freezer, IDK.

for chemicals storage, the only difference is the use of brushless motors, so there’s no spark and consequent explosion risk when the motor kicks in. but for viruses, all you need is a box full of coldness. you can store it safely enough in a foam box filled with ice, as long as you observe the right enclosure protocols.

It’s not like they didn’t know it was dangerous. I think we can probably draw the line at creating new ones. Figure it out somehow else, people of science

Taking what’s likely happened I have to agree .
We can do partial experiments , this receptor with this receptor site , but not the full gain of function experiments.
We can try to model in computers .
We should stop all GoF research on pathogenic viruses.

And the collection of samples from the wild of zoonotic pathogenic viruses and cell culture of such , it’s probably got to stop. The risk is too high versus the reward.

Suggest you find more credible news sources. There’s no evidence covid originated in China, though there is evidence it was present Spain/Italy and US, where it was misdiagnosed as flu prior to first case discovered in Wuhan.

The irony of blaming China, is that US funded viral research in Wuhan and has plethora of bio-labs around the world, with unsurprisingly none located western Europe.

Um, there are many labs in Western Europe that work on such viruses. Just none of them receive US funding because the EU has money of its own.

and if you’re so gung-ho about the fact that the US funded Wuhan lab, why is it not marked on your map?

There’s no evidence covid originated in China, though there is evidence it was present Spain/Italy and US, where it was misdiagnosed as flu prior to first case discovered in Wuhan.

So, please provide the Spain/Italy evidence. We’ve been providing buckets of evidence the other way. Unless your reading skills are a tad weak.

CCP is that you?

Dont take my word for it, there’s wealth of information at your fingertips to educate yourself if you make the effort.

Links to tabloid journalism is not evidence.

I don’t think anyone is, if you would like to make the case, I suggest you link to something that backs up your claims as minus any evidence all we are left with are your words, which as you say, no need to take your word for it.

Telling people to google claims you are making when asked to back up what you claim is rude.

Please show me the genome of the viruses that affected those poor dear early victims. You know, the ones who later went to Wuhan with the express purpose of infecting the poor little Chinese populus. that would be nice proof.

except there isn’t any.

Suggest you find more credible news sources. There’s no evidence covid originated in China, though there is evidence it was present Spain/Italy and US, where it was misdiagnosed as flu prior to first case discovered in Wuhan.

Sure, China couldn’t possibly have anything to do with it.

No news sources are credible. They all just makes stuff up to sell column-inches, or print what they are told to print by their Dear Leaders. The people who attempted to get to the truth in this instance are not journalists. It’s entirely possible that they too are lying, of course. We seem to have entered an era in which lying seems to be the default position.

At the end of the day it doesn’t really matter. Even if it were conclusively proven that China did this, there will be no punishment. What I really hope is that the microbiologists concerned will grow a conscience, stop buggering about with this stuff, and go and get an honourable job instead.

Please show me the genome of the viruses that affected those poor dear early victims. You know, the ones who later went to Wuhan with the express purpose of infecting the poor little Chinese populus. that would be nice proof.

except there isn’t any.

Exactly, it’s only claims with no evidence and observational evidence which would contradict @antibes claim.

The first observational point is hospitals were overwhelmed in WuHan, which is why they put in place lockdowns, the next place to do this after WuHan was in Italy again I remember seeing the hospital staff great distress because they were administering triage.

If the virus existed anywhere before WuHan one would have expected to observe this phenomena in those places that supposedly had the virus prior to WuHan, if not why not? Maybe @antibes can shed some light on that.

Exactly. the timeline of appearance of infection clusters in hospitals exactly points to Wuhan (the only place in China with a lab working on humanizing bat coronaviruses, btw) and all others can point to the exodus of Chinese from Wuhan, especially to places like Italy with large populations of Chinese especially working in the garment industry.

and fuck the Chinese! allowing people to travel out of China on international flights, but blocking their domestic exit highways and railways? Fuck you, China!

China, your goose is cooked! Er rou for everyone!

A post was split to a new topic: From WuHan and name calling

Actually, there was quite a lot of hard evidence before the CCP eradicated it and started finger-pointing! Typical page from the fascist playbook.

A careful look back at their scientific publications going back the last 10 years since those batshit diggers contracted SARS-like disease in Yunnan or wherever (an area now locked down by military peeps) confirm exactly that.

here, if i give you a dollar, will you spout shit for me instead? that’s twice the going rate from the CCP

Done. Have you actually been posting such nonsense since 2017 or is this new to you?