Yanny or Laurel? Which do you hear?

Driving everyone crazy. I hear " Yanny" , but many hear “Laurel”. 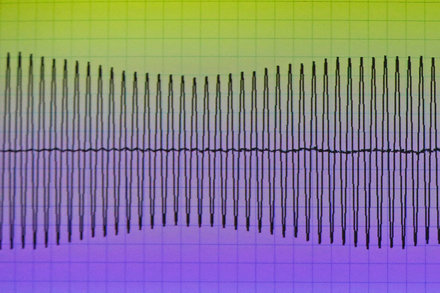 Yanny or Laurel? How a Sound Clip Divided America

It began as a vocabulary word recording. The rest is viral internet history.

Maybe we should create a Poll? I did read that it depends on the frequency that you hear. Low: Laurel and High: Yanny.

No wonder you like that weird music you listen to.

No wonder you like that weird music you listen to.

Nope …can’see how to make a Poll?

How to Create Polls

Was that some sort of joke?

There’s a slider, and if the handler is in the middle it sounds “Laurel” in English. You can keep moving the handler to the right and it still sounds “laurel”, and as you approach the right most position it becomes “yanny”.

People who hear Laurel are insane.

Laurel. I had to pull the slider all the way to the right to get Yanny (but could still kinda hear Laurel).

Maybe I’m wrong (maybe the play the two words in very different frequencies and some people hear one OR another), but probably what they are doing is to give more presence to one or another audio to each visitor, so visitors discuss on internet what is actually heard. It’s probably some trick/scam for getting some attention, like @yyy who pretends to be an alien but he’s just a North American.

I hear Laurel and the wife hears Yanny

edit: that explains everything

Also, the slider doesn’t work well. The filter doesn’t always have the same response to the slider value, depending on something random. And it’s not subjective, it’s a substantial difference from time to time for the same position in the slider. No surprise if you consider the amount of errors in that page:

I hear Laurel and the wife hears Yanny

Are you guys listening it at the same time, from the same computer and speakers?

The slider is a filter, as I supposed, but in the central position I DOUBT that anybody hears “YANNY” or whatever they say. Because the frequencies of the original audio clip for that word are much higher:

That’s in the center position. Now the right most position:

The thing is that the “yanny” (that sounds more like “yelly” to me) is only high frequencies. So no wonder why I couldn’t hear it in the center position… which excludes that word completely. But maybe that’s the way they designed it.

Now, if I listen to it in the right most position, I hear BOTH words, mixed, and not even well mixed, because on the left channel “laurel” is way more audible (but this could be due to my left ear not being very sensitive to high frequencies).

I thought it was going to be more interesting, really.

It seems strange that a group of people listening to the same tape , in the same room , are still divided ?

Do you remember “the dress”? What colors do you see?

Are you guys listening it at the same time, from the same computer and speakers?

Yes same computer, but then afterward she listened to it again through headphones on a different machine and now hears “Laurel”. And now hears Laurel from the original computer. However, I still can’t hear Yanny unless I scroll all the way to the right and then it still isn’t 100%.

Well, if I move the slider all the way to the right I can hear both words, in poor quality. Because of the poor quality, and for some other reasons, including maybe the one pointed out about frequencies among them, people say they hear one or another, but they are fully capable of hearing both. I do hear both.