You're Antifa, I'm Antifa...We are all Antifa

This is going around newsfeeds tonight:

Police: Are you antifa?

Antifa: Clearly not, how dare you accuse me you fascist pig!

Police: Are you antifa and beating up people?

No, I think Trump is thinking of listing Antifa as a terrorist organisation. Probably not a good idea even though there are some real assholes in it.

There are probably some, perhaps even the majority who think their goal is to be anti fascist, which there is nothing wrong with that sentiment at all. I support all forms of peaceful protests.

Not the violent stuff though and responsible cities with responsible police contain Antifa to an extent they don’t hurt other people or themselves.

There are probably some, perhaps even the majority who think their goal is to be anti fascist,

I agree there’s some issues with it.

But I look at actions. If you are really against fascism, it’s obvious antifa is fascist. It doesn’t matter what your ideas are or what you say.

Uh, don’t you guys have your own government?

Not sure I see your worry about the eee-vile Trump disappearing Canadians.

eta: unless there are actual Canadians behind the black masks in the US. In that case all bets are off. Fuck 'em.

Step 1) Create an organization with the purpose to violently attack people seen as opponents
Step 2) Name it “Anti Fascist”
Step 3) “We’re Anti Fascists, ergo anyone against us is a fascist!!1 cHeCkM8 mAh DuDe”

The absolute state of western civilization.

You can be a Unitarian and not even know it.

No, I think Trump is thinking of listing Antifa as a terrorist organisation. Probably not a good idea even though there are some real assholes in it.

Remember when RICO was wielded against abortion protesters?

There are plenty of laws by which to prosecute these thugs. When they cross state boundaries in any way, the feds can step in.

But the point of the “terrorist” label is to trigger people into trying to defend Antifa. Just talking about it will do the job.

Believe me, I am not antifa.

The so-called “Border Resistance” exercise involves a “militancy training tour that will converge on a 10-day siege in El Paso, TX,” according to a tweet Monday from reporter Andy Ngo.

The promotional image shows border enforcement officers being killed & government property fire bombed. Organizers are asking for “white comrades to pay for others.”

Despite the group’s use of intimidation and violence, Antifa enjoys some level of support among certain progressives and even portrayed positively (at least partially) by some in the media. For example, former Vice President Joe Biden launched his presidential campaign by praising Antifa. CNN host Chris Cuomo suggested that they fight for “a good cause” and shouldn’t be judged like other political factions that try to circumvent the democratic process through raucous protest.

The far-left Antifa movement is reportedly planning to besiege El Paso, Texas in an attempt to raise awareness of alleged abuses at the U.S.-Mexico border.

Because of the group’s use of intimidation and violence, Antifa enjoys some level of support among certain progressives and even portrayed positively (at least partially) by [some]in the media.

What happens when you punch back. 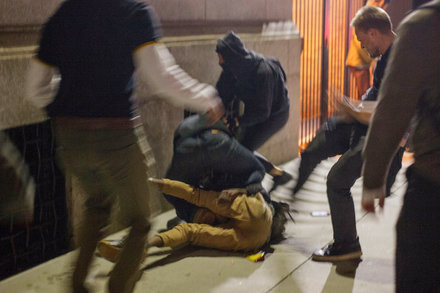 Far-Right Proud Boys Go on Trial, but Anti-Fascists Are Boycotting

Four victims have not cooperated with the authorities and are not even known to prosecutors.

Long story short: Antifa are cowards. All you have to do to beat them is punch back.

If by that you mean, “Are people dressing in black, wearing masks to conceal their identity and violently attacking people they disagree with politically,” then yes, the sky is falling.

That report on antifa’s action in El Paso is a year old. How did it go?

If you have shown up to a protest, if you have been in a picture showing you were near a protest, if you have offered first aid at a political demonstration or shown up as clergy support or carried a sign or made a Facebook post or LIKED a post saying you’re against fascism, you could be accused of being a “member of Antifa,” and you can’t prove it’s not true.

If you don’t like fascism, you’re definitely not a part of Antifa.

That report on antifa’s action in El Paso is a year old. How did it go?

It doesn’t work that way.

Yea, I know. How it works is, unsubstantiated claim made, doesn’t happen, rinse and repeat.